Your Position: Home VOC's Travel BLOGCulturesThe everlasting glamour of the Silk Road – the adventure for a profound Chinese culture

The ancient Silk Road of China is a renowned commercial and cultural route opened up some 2000 years ago by the Chinese envoy Zhang Qian (张骞) of Han Dynasty (202BC-220AD). With the purpose of building friendly relationships among China and other central and western Asian countries as well as some European ones, many Chinese products were taken along with the Silk Road, such as silk, satin, tea, bronze and porcelain; and likewise, plenty of other exotic specialties were brought back- spices, textiles, ivory, perfumes and precious stones from India, and gold, silver, jewels, carpets and wine from Roman. With silk being the major item traded along the route, thus its name of this world famous Silk Road, along which some other medicines, techniques and religions were also exchanged, and in the history, the camels, which is honored as the ship of the desert, are the major vehicles of the Silk Road.

The typical route of the ancient Silk Road
The route of the Silk Road changed slightly in the area of present Xijiang Uyghur Autonomous Region in different dynasties in the history, but the main route is fixed. And a typical Silk Road is starting from the ancient capitals of Luoyang or Chang’an (present Xi’an), and then goes through the present provinces of Shannxi, Gansu and Xijiang, which passes the Yellow River at Lanzhou, and then along the Kansu Corridor in present Wuwei, Zhangye, Jiuquan, Jiayuguan, Dunhuang, and after the pass of the Yumen Pass or Yangguan Pass, it stretches along the deserts and mountain ranges to reach the ancient Kingdom of Gaochang (in present Turpan) to Urumqi, Korla, Kucha, Aksu and Kashgar, and finally leads to the Central Asia, to India, Persia and at farthest the Roman Empire. 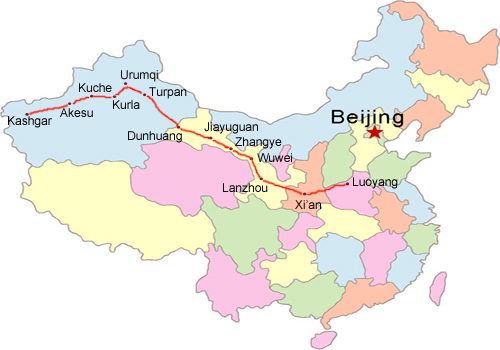 The significance of the Silk Road
After the opening of the route, countless ambassadors and traders, as well as the common people, the nobilities or even the beggars from the countries through the route go to and fro in an endless stream via Silk Road. Among these travelers, Ban Chao (班超, another envoy of Han Dynasty who was designated to the western regions) and Xuanzang (玄奘, an eminent monk and Buddhist scholar of Tang Dynasty (618-907) who had travelled to India and brought back numerous precious Buddhist scriptures) are the best known to Chinese. As a matter of fact, the Silk Road is significant in the development of some of the great civilizations of the world. As the trade arteries of communication traversing the Eurasia, it had greatly promoted the friendly exchanges among China and other European and Asian countries in many fields, politics, economy, diplomatic, religions, and so on, and it was also the bridge that the three great cultures- the Chinese Culture, Indian Culture and the Hellenism met and merged. 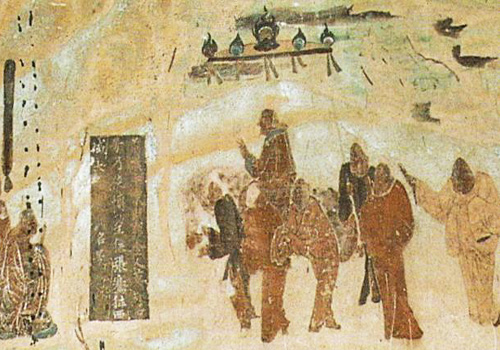 (Photo: A mural found in Dunhuang depicting the Zhang Qian's journey to the west regions.)
Famous attractions and appeals along the Silk Road
For centuries’ cultural exchange in the history, the Silk Road offers not only lots of diversified natural wonders, but also a wealth of ancient historical sites and relics which have blended in the colorful local conditions and customs of the ethnic groups live in this immense area. Though broken off and have went through millennium vicissitudes, quite part of the historical sites and ruins along the Silk Road are still in good keep owing to the natural conditions for being drought and short of rainfall. They evoke visitors the imaginations of the mysteries of the ancient time, and give the experience of exploring the profound culture following our remote ancestors’ footprints. 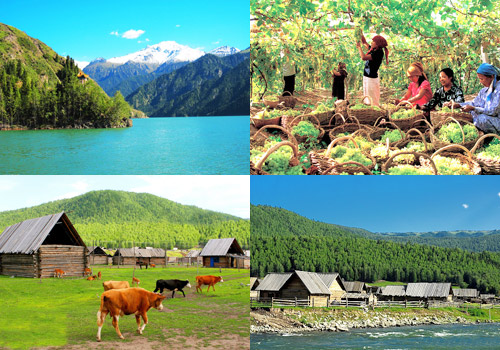 (Photo: Natural beauties and attractions along the Silk Road.)
In this fantastic journey of the Silk Road Adventure Tour, there are contrasted ethnic habitudes of Han and Uyghur, the religious features of Buddhism and Islam, the distinguished east culture and west (central Asian) culture, and the marvelous natural desert and mountain sceneries.
Depart from the ancient capital of Xi’an, it is the amazing Terracotta Army and Horses, and then the following famous historical attractions along the way are the westernmost end of the Great Wall and its first fort in Jiayuguan, the Ancient City of Jiaohe and the Ancient City of Gaochang in Turpan, the Abakh Khoja Tomb in Kashgar, etc; the religious attractions are the best-preserved Mogao Grottoes of Buddhism in Dunhuang, the Idgar Mosque in Kashgar, the Kizil Thousand-Buddha Caves in Kucha and kinds of other Buddhism caves and temples; while the natural beauties should include the beautiful Mingsha Shan in which visitors can ride a camel in the desert to reproduce the scenes in the past, the Heavenly Lake in Urumqi which nestled in the snow covered mountains, the Taklimakan Desert which is the second largest desert in the world as well as the origin of Xinjiang civilization, and so on. 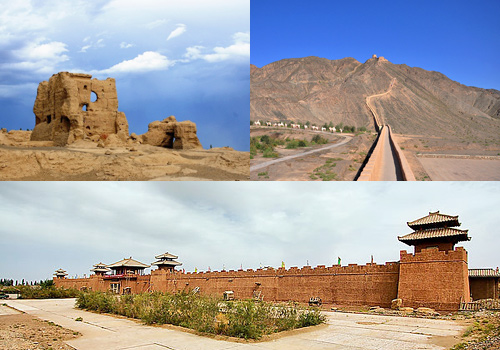 (Photo: The historical sites along the Silk Road, successively are the Ancient City of Jiaohe, the Overhanging Great Wall and the Yangguan.)
Along the Silk Road in the west region of China in Xinjiang, it is the strong features of the Muslims and Uygur, who still live the lifestyles as that of their forefathers with minarets, roast mutton, grapes, ethnic music and dances, and in the Sunday Bazaar, which is the market with a history of 2000 years, it is the bustling scene the same as that in ancient days.
Silk Road travel tips:
1. The best time to travel along the Silk Road is from May to October with the pleasant weather.
2. It becomes drier in the further west of China, so it is suggested to bring high-efficiency moisturizer to resist the rather dry air in the desert areas.
3. It is wise to bring warm clothes even in the hot summer due to the large temperature difference between day and night in some areas along the Silk Road.
4. The Silk Road is the area mainly inhabits Islam and ethnic groups; it is polite to respect their religious faiths and unique manners and customs.
5. Please prepare yourself to accommodate the long time ride as the attractions of Silk Road are dispersed in great distance.
---By April (VisitOurChina)
Tags: Silk Road Dunhuang Lanzhou Urumqi Turpan Kashgar

To visit Silk Road is always my dream, after reading this, I am sure I will visit there one day.

Hi Alina, welcome to our travel blog! The Silk Road is really an amazing adventure with various natural beauties, diversified religious and ethnic cultures, and rich historical sites and ruins. It is very well worth a visit, just follow your dream and you won’t be disappointed!