Your Position: Home VOC's Travel BLOGCulturesFamous Festivals of Chinese ethnic minorities in the first half of a year

1. Tibetan New Year: usually in February or March.
The Tibetan New Year is the most important festival in a year for Tibetan people. The formal celebration starts from the first day of the first month in Tibetan calendar and lasts for 15 days, but preparations are usually made one month early. As a way of welcoming the New Year, all the men and boys have to have their head shaved, correspondingly, women and girls will wash and comb their hair. An overall house cleaning is always needed before the festival, but the cleaning of ceiling and chimney should be done on auspicious days such as the dates of 3, 5, 7, 9, etc. 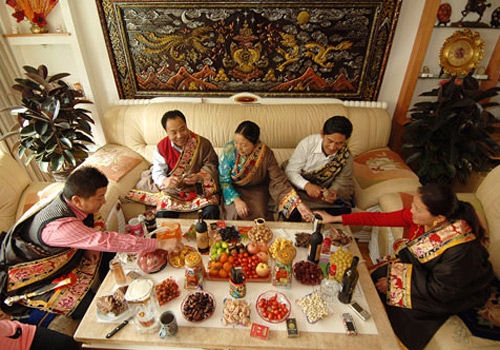 Chema is a kind of requisite oblation during the Tibetan New Year. To make a Chema, a wooden box painted with multicolor decorative patterns is needed, in which zanbas made of fried kernels and butter are placed. On the top of the zanbas, "colorful flowers" sculptured with ears of local highland barley and local butter are plugged. Besides, a bowl of local highland barley seeds must be soaked in advance and be sure that the seeds will sprout during the festival. Consecrating the Chema and the seedling on the sacred table is a traditional way the local pray for a good harvest in the coming year.
On the first day of the New Year, everybody says Tashi Delek (Happy New Year) to each other and Tibetan operas are performed in both urban and rural areas. Also, horse racing, archery, wrestle and some other traditional activities of Tibet will make the celebration more alive during the festival. As the night falls, herdsmen sing and dance by the bonfire overnight. 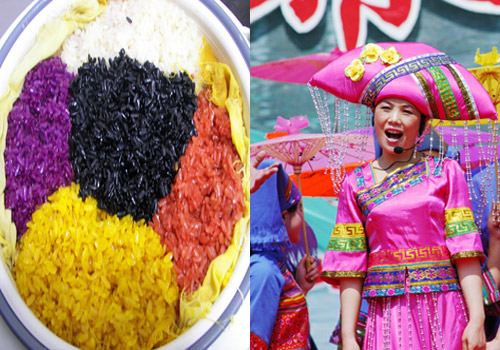 2. San Yue San of the Zhuang: usually in March or April.
San Yue San, literally the third day of the third month in Chinese lunar calendar, is a very important festival with double significances for the Zhuang people. On one hand, in rural areas where Zhuang people inhabit, especially in Guangxi Zhuang Autonomous Region (or Guangxi Province), San Yue San is the most ceremonious festival for Zhuang people, an ethnic minority famous for being fond of singing folk songs, to gather on a fixed open ground to "Dui Ge (singing in antiphonal style)", by which many boys and girls fall in love with each other and get married. On the other hand, San Yue San is also the Tomb-sweeping Day of Zhuang people in some places in Guangxi. On San Yue San, according to the tradition, Zhuang people will bring hearty cooked dishes and snacks to the graveyard, clear the graves of their ancestors and decorate them with colorful paper-cuts, burn joss sticks and plug them in front of the greaves, showing their respect and expressing their love to the departed. One of the oblations is steamed sticky rice dyed to be various colors with juices of plants.

3. Water-Sprinkling Festival of the Dai: from 13th to 15th, April.
Also known as Buddha's Birth Day, the Water-Sprinkling Festival is in fact the New Year of the Dai people and is also celebrated by some other ethnic minorities of Yunnan Province, Thailand, Cambodia, Burma, Laos. Originated from India, the festival was spread to the Dai areas such as Xishuangbanna with the more and more significant impact of Buddhism in China. Till this day, it has been being celebrated by Dai people for hundreds of years. At this festival, women will wash the statues of Buddhas with clean water and people will beginning the celebration by sprinkling water to each other after the "Buddha cleaning". The more one is sprinkled, the luckier he/she is thought to be. 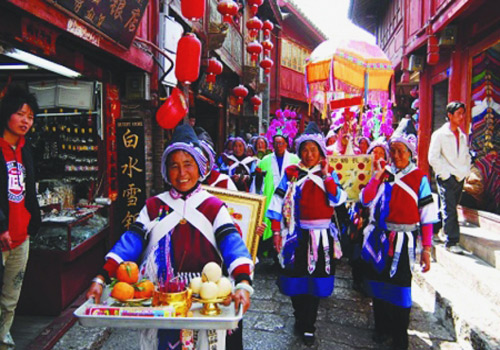 4. Sanduo Festival of the Naxi: usually in February or March.
Falling on the eighth day of the second month in Chinese lunar calendar, Sanduo Festival is a proper festival of Naxi people in Yunnan. Evolving from the Beiyue Temple Fair of Yulong Village of Baisha Town, it is a fete to offer sacrifice to God Sanduo, who is believed to be the incarnation of the sacred Yulong Sown Mountain and the Naxi's patron saint, who is dressed in white helmets, holds a white spear in hand and rides on a white horse. It is said that Sanduo was born in the year of goat, so all of offerings served on the day are goats. 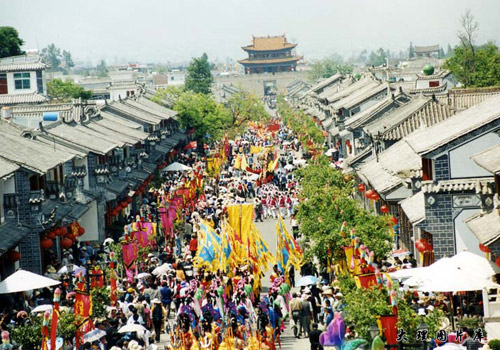 5. Sanyue Street Market of the Bai: usually in April or May.
Famous as a grand festival of Bai people in Dali, Yunnan, the Sanyue Street Market Festival is celebrated annually at the Cang Mountain in Dali ancient town from the 15th day of the third month in Chinese lunar calendar and last for several days. It is recorded that merchants from Sichuan, Tibet and some other provinces came to attend this festival early in Ming (1368-1644) and Qing (1644-1911) dynasties, because it is not only a ethnic festival but also a busy "street market date" in local and that's how the name comes. Apart from trading of various commodities, the street there is the place for putting on ethnic dances, horse racing and athletics. 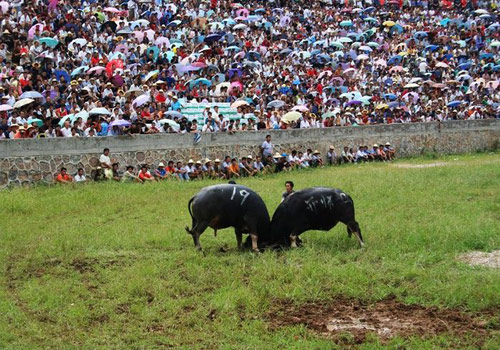 6. Bullfight Festival of the Dong: approximately in February-March or August-September.
Bullfight is not only the exclusive sport of Spain – the annual Bullfight Festival held at Dong villages attests it. Traditionally, every family raises a buffalo at least at a Dong village and it would be sent to race with other buffaloes on a ground at the festival, which is held in the second or the eighth month in Chinese lunar calendar. Accompanied by music producing by local musical instruments, a march-in ceremony will go before the formal game; then a loud hit and the throwing of the torch announce the beginning of the exciting moment. The colored flags of one party who loses the game will be taken away by the winner, the way they ransom the flags is paying ransom gifts and singing; and the "bull king" will be donned with a red cloth to show its braveness and the victory.

Wow, the ethnic festivals sound so interesting, I plan to experience one of them, such as Water-Sprinkling Festival of the Dai.

I'm of Zhuang minority myself in fact and would love to highly recommend the steamed COLORED STICKY RICE, which is dyed with juice of certain plants with delicate fragrance. It is also a delicious dish by stir-frying the steamed rice with soil, salt and meat cubes. The Water-Sprinkling Festival of the Dai interests me very much as well and I've been wishing to experience this lively Carnival of water in Xishuangbanna some day myself.