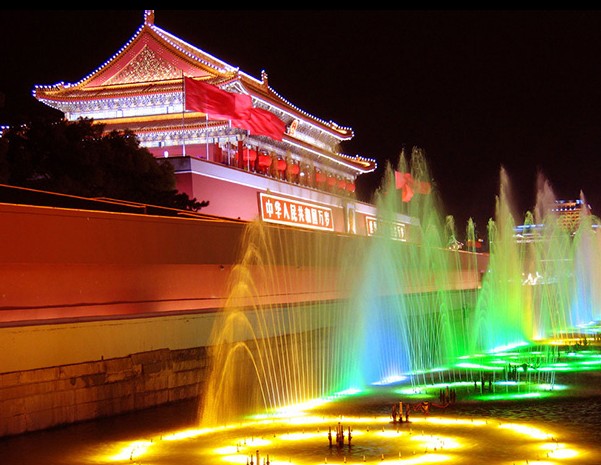 Program:  Arrive in Beijing, you will be met and transferred to your hotel in Beijing city.

Program: After hotel breakfast, feel leisure in the morning, then enjoy the lunch on your own. Afterward begin the half day tour to the Tiananmen Square, the Forbidden City, Beihai Park.

-The Tian'anmen Square: The largest city square in the world.
-The Forbidden City: The largest imperial palace in China during the Ming and Qing dynasties with a history of around 600 years.
-Beihai Park: The Beihai Park in the center of Beijing has an area of more than 70 hectares with a water surface of 39 hectares. To its north is Shichahai Lake and to its east is Jingshan Park. The Palace Museum is to its southeast, a short distance. 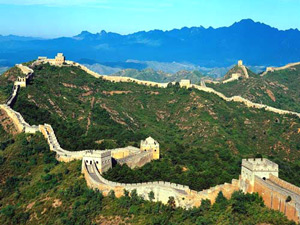 Program:  After hotel breakfast, full day tour to explore the Mutianyu Great Wall (the cable car is available at your option), the Chang Ling, and the Sacred Way.

-Mutianyu Great Wall: This less-crowded section of the Great Wall is a pleasant drive 90km NE of Beijing. A cable car takes you to a good section (avoiding a very steep climb), where you can walk along the wall, through the watch towers and enjoy superb views as it snakes across the hills and mountains.
-Chang Ling: It's the biggest one, first one and best preserved one of the thirteen tombs of the emperors in the Ming Dynasty.
-Sacred Way: The way guarded on both sides with stone statues by which the ancient emperors went to hold a memorial ceremony for the ancestors

-Hutongs: The old narrow paths where common people lived. All the Hutongs crisscross with each other, dotted with the Kindergarten, the Bell Tower, the Drum Tower, the Tea House, and the lake, House of Gong Infante and local people's houses among them.
-The Summer Palace: The largest and best-preserved royal garden in China with a history of over 800 years.
-The Temple of Heaven: The place where the ancient emperors used to pray for the God's bless of the whole nation. 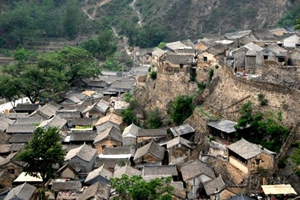 Program:  After hotel breakfast, you will be transferred to the Chuandixia Village with about 2 hours on the way. Arriving at this village, you can drop in one or two homes to get to know their houses and local people's daily life escorted by your guide.

Program:  In the morning, you will be transferred to have the half day tour to visit the Beijing Botanical Garden. Then feel at your leisure Time for the rest of day.

Transfer via: by overnight train-soft sleeper arranged by us (Morning train K21 ETD 8:58 AM)
Program: In the morning, you will be transferred to the railroad station for your overnight train to Guilin.

Program:  Arrive in Guilin at around 12:26 PM, be met and transferred to hotel, feel free at the rest of the day. 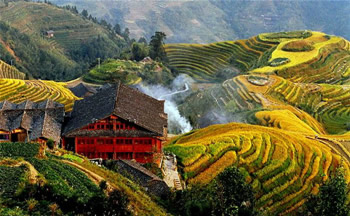 Program:  After hotel breakfast, full day tour to visit the Dragon's Backbone Rice Terraces, Yao Ethnic Tribes, then be transferred back to your hotel in Guilin City. 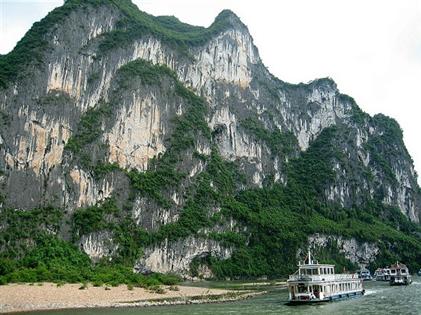 -Li River Cruise: Depart from your hotel in the morning. Be transferred to the Zhujiang Pier (about 1 hour drive) for a 4.5 hours wonderful cruise. You will enjoy the picturesque mountains, peaceful green fields, farms and villages with water buffalos, cows wondering around on both sides of the river bank. Disembark at the one-thousand-year-old town Yangshuo in the afternoon.
-West Street: West Street is the oldest street in Yangshuo with a history of more than 1,400 years. Situated at the center of Yangshuo County, West Street has become, since the 1980's, a window of eastern and western culture and the biggest 'foreign language center' in China.
-Big Banyan: 6 kilometers away from the County of Yangshuo, you will find a prominent and towering tree: the Big Banyan Tree. It has survived wind and rain over centuries since it was planted during the Sui Dynasty (581-618).
-Moon Hill: about 50 minutes' bike riding from Yangshuo, there lies the Moon Hill. Named for the crescent shaped cave running through the moon, Moon Hill is one of the highlights in Yangshuo.

Program:  After hotel breakfast, cycling around the countryside of the Yangshuo ancient town to meet the ordinary folks. Then enjoy your cooking class with the local people. 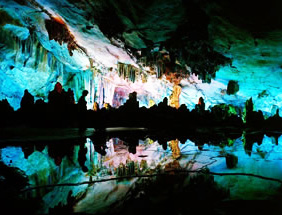 -Reed Flute Cave: Known as "the Palace of Natural Arts" where you can see beautiful stalactites & stalagmites, learn how they are formed.
-Seven Star Park: The biggest park in Guilin, where you can see the Camel Hill, Bonsai Garden, Qixia Buddhism Temple, Flower Bridge and more sites if you are energetic enough to climb some hills.

Program:  Arrive in Shanghai at around 15:46, be met and transferred to hotel, enjoy the night view of Shanghai around the area of the Bund (Waitan), Nanjing Road. 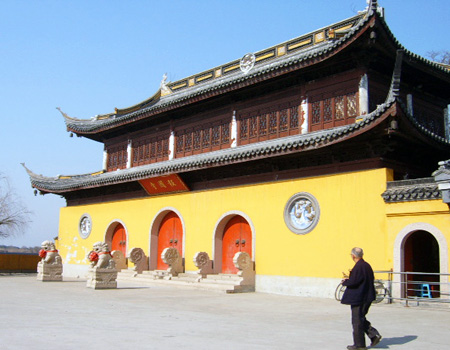 -Yu Garden: It's reputed to be the most beautiful garden south of the Yangtze River. Built beside the Temple of the City God and covering only fives acres, it follows the Suzhou garden design of a world in microcosm
-Jade Buddha Temple: The Jade Buddha Temple is one of the few temples in downtown Shanghai. If you're lucky, you can watch the monks serving a ceremony in a side room.
-Shanghai Old Street: Known as Fangband Road, "Shanghai Old Street" with a total of 825 metres, is adjacent to the Yuyuan Garden Bazaar Area and runs in an east-west direction from Zhonghua Road to Henan Road South, with both ends marked by decorated archways
-Shanghai French Concession: The Shanghai French Concession is a district in the city and was the foreign concession of France in Shanghai. Covering what are today Xuhui District and Luwan District and occupying the centre. 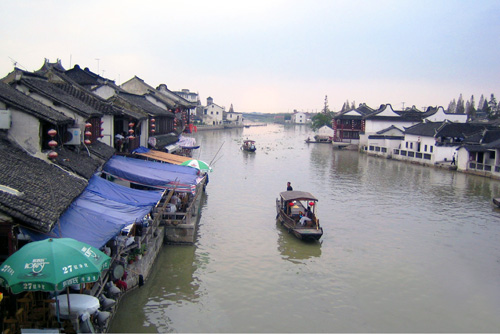 -Shanghai Museum: The biggest museum in China, with a collection of over 120,000 pieces of Chinese art & cultural relics. It is especially famous for its treasures of bronzes, ceramics, paintings and calligraphy.
-Oriental Pearl TV Tower: The highest TV Tower in Asia. With 468 meter high it stands in Pudong Park in the new and developing Lujiazui district on the banks of the Huangpu River.
-Zhujiajiao is a typical ancient water town in the south of the Yangtze River. There you can see the well-preserved Ming and Qing architecture, ancient stone bridges, ancient streets, etc. 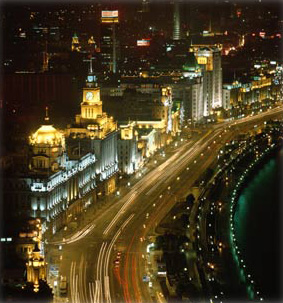 Program:  Free at your leisure Time.

Program: Free at your leisure Time.

Transfer via: by air-your own arrangement (Afternoon flight ETD 1:00 PM)
Program:  Feel at the leisure until be transferred to the airport for your departure flight to Hong Kong International Airport. 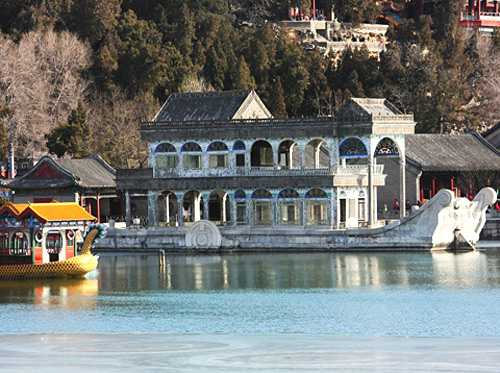 Program:  After hotel breakfast, full day tour to visit the Hutongs in rickshaw, the Summer Palace, the Temple of Heaven.