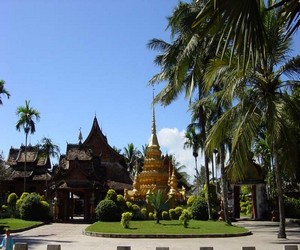 Located in the southernmost part of China, Xishuangbanna is a Dai autonomous prefecture of the Yunnan Province which can be compared in many aspects to a mini-Thailand. Originally called Sip song pan na, a name sounding much more Thai than Chinese, this literally Twelve thousand rice fields is unique for its fertile earth, tropical vegetation and amazing biodiversity. Place of the Dai minority who represents more than a half of the population (297,000), Xishuangbanna is definitely a famous tourist destination especially renowned among China domestic tourists. Some similar Thailand inspired attractions and festivities can be seen there, such as rocket festivals, boat races and the Water-Sprinkling Festival equivalent to Songkran Festival in Thailand and falling on the same dates (from April 13 to 15). Like in Thailand and Burma, the place let travelers discover saffron-robbed monks of Theravada Buddhist faith wandering in the streets, but also countless Burma-Thai style pagodas and impressive food: a wonderful journey to an unsuspected part of China! History of Xishuangbanna A tropical utopia home to the Dai ethnic minority The Dai history of Xishuangba... More information about Xishuangbanna »

Located in the south of Mengyang Natural Reserve, 48 kilometers from Jinghong City and 115 kilometers from Pu’er City, the Wild Elephants Valley is the most fascinating forest park known for primeval tropical rainforest and flocks of Asia wild elephants, which can only be seen in Xishuangbanna.

Located in the lower reaches of Lancang River, Ganlanba is only 530 meters above sea level with humid and hot weather, being the lowest and hottest place in Xishuangbanna. Hot weather brings in abundant products for Ganlanla such as a great variety of tropical fruits and plentiful candied fruits.

All Photos of Xishuangbanna» 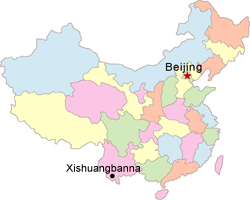