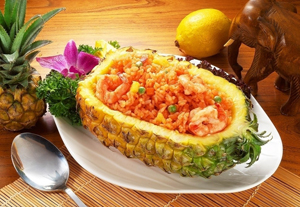 Owing to Dai people are the major residents of Xishuangbanna, Dai-style food is the typical food in Xishuangbanna. The staple of Dai food are glutinous rice, barbecue and aquatic product, which are usually served with wild and cultivated plants.

Representative dishes are "Nanmi" (a kind of sauce), Bamboo Rice, Pineapple Rice, Barbecue, Stewed Fish or Chicken with Pickled Bamboo Shoots, Roast Fish with Vanilla, Fried Ferns, Fried Moss and special dishes of Blang people and Hani people, most of which are worth trying.

"Nanmi" in the Dai language means sauce. "Nanmi" actually is a general name for crab sauce, bamboo sauce and other sauces on the basis of main materials. The process of making the tomato sauce goes very simple: bake some tomatoes over the fire and then peel them, finally mix them with scallion, onion, coriander, vanilla, wild pepper, chili and salt. It is even more tasteful when it is served with fried foods and local cranberries.

Dai people are particular about glutinous rice. They can make glutinous rice into different snacks, among which Bamboo Rice is most favored by visitors.

Bamboo Rice is cooked inside fragrant local bamboo. Cut down a part of bamboo keeping two knots and dig a hole at one joint to put in clean glutinous rice and add some water, then bake it on the charcoal fire after bunging the hole with bamboo leaves. When water is dried out, delicious bamboo rice is ready for you.

Night markets in Jinghong are the paradise of gourmets. Apart from the above mentioned local specialties, the night markets are rich in various ethnic foods, such as Roast Bamboo Rat, Duck-foot, Bamboo Worms, and Fried Pigskin and so on. At night, visitors can taste local snacks and dishes and simultaneously appreciate the night scene of Jinghong.

If you have the courage to try insects, you can order an insect feast to taste grasshopper, scorpion, bamboo worms and bee larva and other insects.