Daxu Ancient Town is the first to be mentioned as one of the four most famed ancient towns in Guangxi Zhuang Autonomous Region. Due to its preferable location on the northern bank of Li River, some 23 km southeast of Guilin, Daxu Ancient Town enjoys a humid subtropical climate with beautiful sceneries. Originally built in 200AD with a history over 1800 years, the town already got its fame as one of the four fair towns in Ming Dynasty (1368-1644). The preserved residences and alleyways we can see today in the village are mostly in the styles of Ming and Qing (1636-1911) dynasties with aged black bricks and grey tiles, standing on the old stone-paved streets. Nowadays, there are still some traditional manual workshops to be discovered making straw sandals, bamboo weaving, traditional funeral articles and clinic using traditional herbal medicine and the old style barbershop. The Wanshou Bridge (万寿桥, Longevity Bridge), a single arched stone bridge, built in Ming Dynasty is the largest highlights in this ancient town. Today, a stop at Daxu Ancient Town is an experience for a deeper knowledge about the life of local people and the historical, cultural atmosphere, as well as a wonderful exploration for the nature in Maozhou Island-the biggest island on Li River, to pick fruits and vegetables and taste typical countryside snacks and delicacies.
2. Huangyao Ancient Town (黄姚古镇), Hezhou 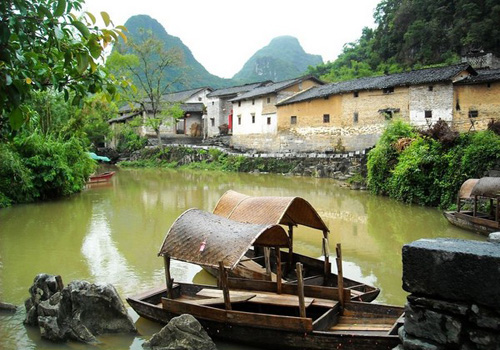 The history of Huangyao Ancient Town can be traced back to Song Dynasty (960-1279). The present layout of the town was built during the Wanli Period (1573-1620) of Ming Dynasty and the town reached its heyday during the reign of Emperor Qianlong (1763-1795) of Qing Dynasty. The town mainly houses the Huang family and Yao family, hence the name. Owing to its isolated location surrounded by hills, 70 km away from Hezhou city, the town developed a unique culture of its own which is well preserved with aged residences and precious cultural relics. Once the base area behind enemy lines during the anti-Japanese war (1937-1945), the town is still preserving the sites of the offices and dwellings of the notables. Enjoy the title as “Dreamland Hometown” and “Little Guilin”, Huangyao Ancient town also enjoys the typical karst landform with gorgeous hills and waters, attracting visitors home and abroad, as well as the TV crew. It is the location for teleplays Country Spirit(酒是故乡醇) and Plain Love Ⅱ (茶是故乡浓) shot by TVB of Hong Kong. The story of the Plain Love Ⅱ mainly happened in a tea workshop, which is a authentic traditional one in Huangyao that still making the tea in taditional ways of Tang (618-907) and Song dynasties.
3. Xing’an Ancient Town (兴安古镇), Guilin 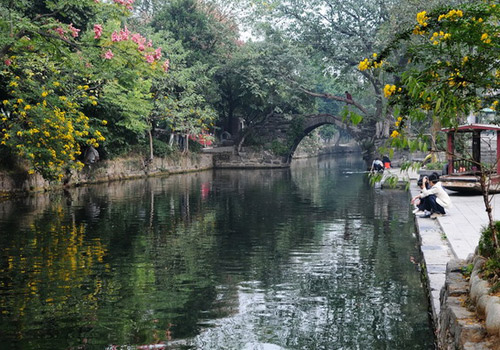 Xing’an Ancient Town, one of the Ten Most Charming Ancient Towns sponsored by CCTV, refers to present Xing’an County, some 63 km north of Guilin. It is a veritable ancient town with a history over 2000 years established by the first feudal Emperor of China Qin Shi Huang (259BC- 210BC) in Qin Dynasty (221BC- 207BC). The biggest highlight of the town is the aged project-the Lingqu Canal (灵渠) which echoed the Great Wall in north China and both were constructed by Qin Shi Huang. Together with the Dujiangyan Irrigation System in Chengdu and Zhengguo Canal in Shaanxi, Lingqu canal is the most complete existing ancient canal in the world, which connects the Xiang River and the Li River with the Yangtze and the Pearl River in Guangzhou, playing an extremely important role in the aspect of water conservancy since it was finished. Shuijie (水街, or Water Street), a featured street along the canal in the county, is amazing and charming by the retained idiomatical buildings in styles of Qin and Han dynasties, a numbers of ancient stone bridges, sculptures, tea-houses, and marketplaces. In addition, Xing’an is also the home of the highest mountain in southern China- the Mao’er Mountain (猫儿山), as well as an important historical site where the Red Army broke through the Xiang River during the Long March.
4. Yangmei Ancient Town (杨美古镇), Nanning 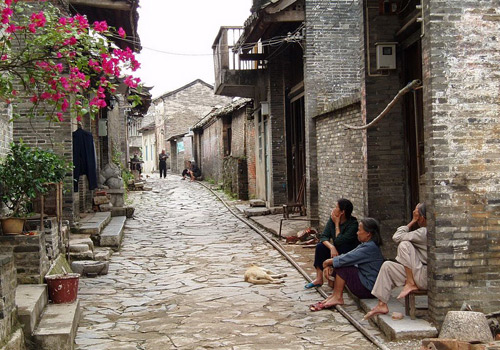 Located some 30 km west of Nanning, Yangmei Ancient Town was founded in Song Dynasty and reached its prime in Qing Dynasty, the time it became a key port on the Yong River; but it later become quiet because of the decline of water transport in the region. Underwent for over 1000 years, the town has retained to be primitive in customs, gracious in virtues and profound in culture. It is a place endowed with spirits of the universe that has given birth to many notables and scholars, including numerous successful candidates in the highest imperial exams in Ming and Qing dynasties and revolutionaries of the Revolution of 1911 (辛亥革命) in modern history, which ended imperial rule in China. The aged streets, old houses and courtyards, antiquated window lattices, and exquisite carved cornices are all the history of this ancient town. The highlights in the town is the Eight Ancient Scenes of Yangmei and two famous historical sites, one of which is the former residence of revolutionaries of the Revolution of 1911, a site once held secret meetings for the Zhennanguan Uprising leaded by Sun Yat-sen; and the other is the Kuixing Pavilion (魁星楼), built in 1736 and shaped like the imperial seal, within three wooden gods of scholars enshrined separately on three floors.
---By April (Visit Our China)
Tags: Guilin Hezhou Nanning Daxu Ancient Town Huangyao Ancient Town Xing'an Ancient Town Yangmei Ancient Town