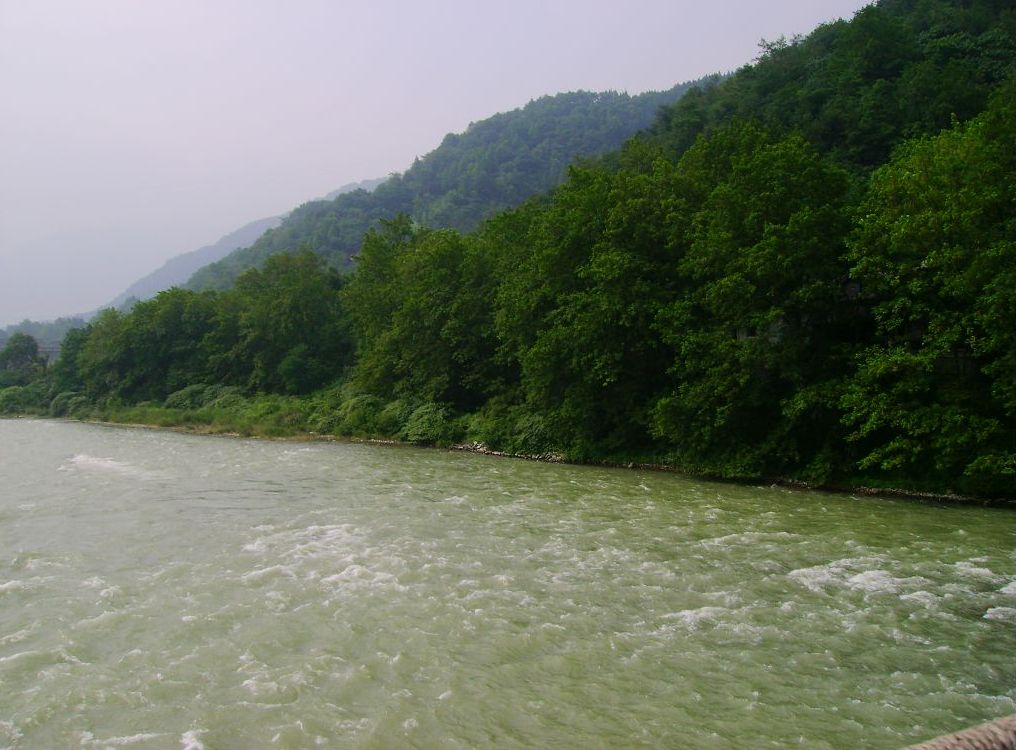 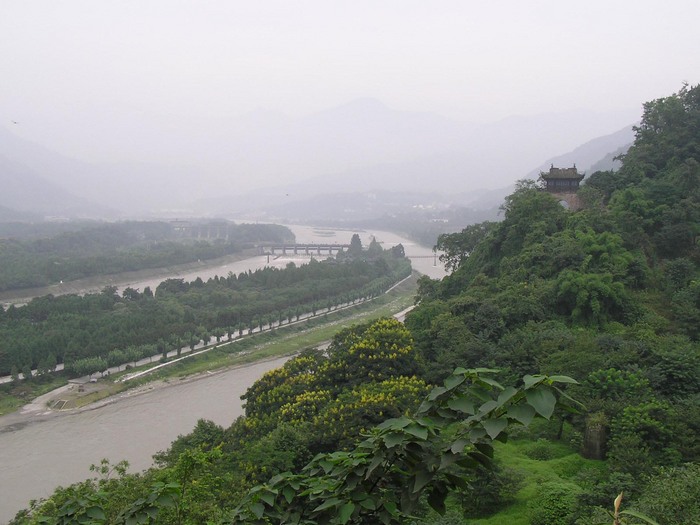 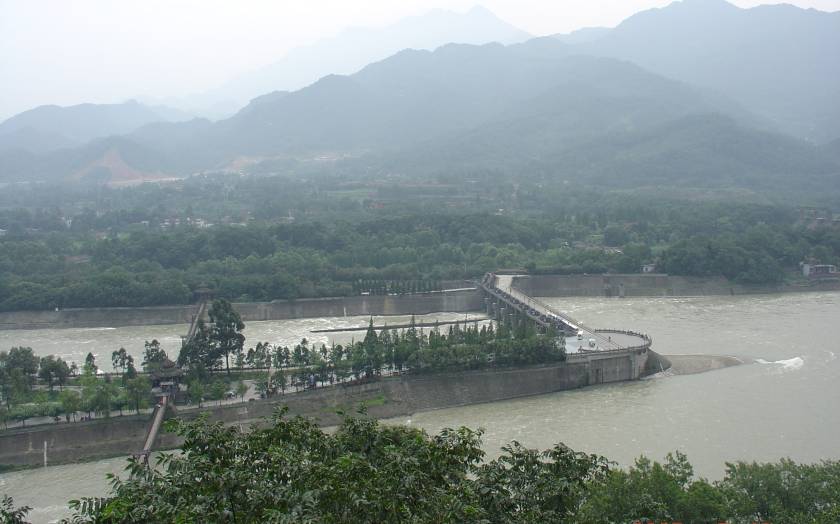 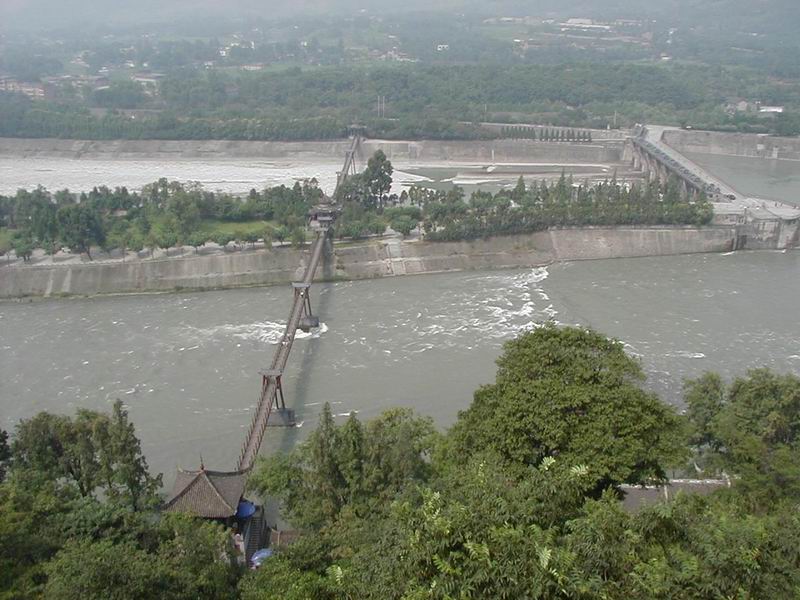 Eulogized as the Originator of World Irrigation Systems, Dujiangyan Irrigation System of Chengdu is the oldest and the only preserved grand irrigation system in the world which has no dam for water-diversion and still in service today. The system was built in 256 of Qin Dynasty (221BC-206BC) under the leadership of Li Bing (李冰, the chief official of ancient Chengdu) and his son. For over 2200 years, Dujiangyan Irrigation System produced great benefits for the area, and the rich of Chengdu as well as its fame Tian Fu Zhi Guo (天府之国, means “country of heaven” or “land of abundance”) is basically attributed to the this famous irrigation system. 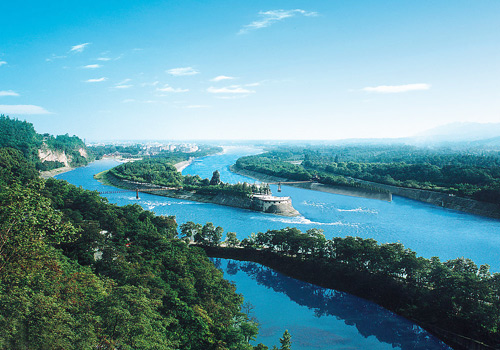 In addition to be a world famed ancient irrigation system, Dujiangyan Irrigation System is also a celebrated scenic spot with neighboring graceful landscape and masses of cultural relics and historic sites, such as Fulong Temple, Two Kings Temple, Yunv Peak, Lingyan Temple, Cuiyue Lake, Dujiangyan Lying Iron, etc. A key cultural site under the state’s protection, it was included in the first batch of national scenic spots in 1982, awarded as a 5A scenic area (top grade of the country) in 2007, and with its long history, grand scale, rational layout, scientific operation and a harmony incorporation with ambient, Dujiangyan irrigation Syste was inscribed as a World Heritage Site in 2000 by UNESCO.

Dujiangyan Irrigation System was built on Minjiang River, which is a large tributary of Yangtze River and flows through the west of Sichuan Basin, an area of heavy rainfall. In ancient time, during flood period, the Chengdu Plain was just a world of waters while during drought period, it was a scene of utter desolation; generally, there was no single grain was reaped in a year and people lived around often suffer from hunger. To solve the livelihood of Chengdu people and because of its specific strategic position in unifying of China, the Qin Kingdom (770BC-221BC) appoint Li Bing, a wisdom who had good knowledge of astronomy and geography, to control the flood and had the Dujiangyan Irrigation System build. The project is a comprehensive one in flood prevention, irrigation and shipping. After its completion, the area developed quickly in agriculture and provided solid economic foundation for the establishment of Qin Dynasty (221BC-206BC), the first unified feudal regime of China. In early days, the irrigation system was called Jian Beng (湔堋), and it got its name Dujiangyan in Song Dynasty (960-1279). 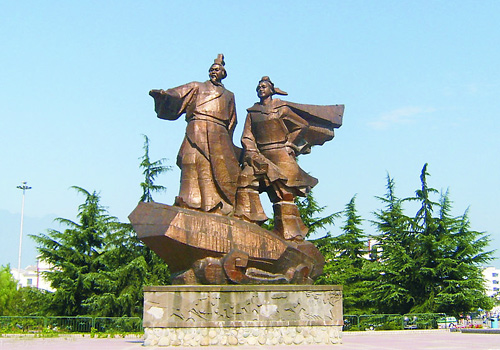 The integrated planning of Dujiangyan Irrigation System is dividing the Mijiang River into two flows, one of which is specifically introduced to Chengdu Plain, which is not only a good solution of flood diversion but also a beneficial irrigation for farmlands there. Main parts of the project of Dujiangyan Irrigation System are Fish-mouth Water Distribution Dyke, Feishayan Spillway and Bottle-shaped Water Intake. 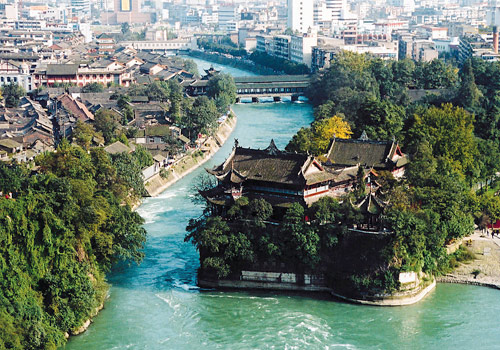 Erwang Temple (Two Kings Temple) Located on the hillside of south bank of Minjiang River, the Erwang Temple just faces the Dujiangyan Irrigation System. It was originally an ancestral temple in memory of Shu King which later was changed to commemorate Li Bing and his son during Jianwu Period (494-498) of Qi Dynasty (479-502) during Southern Dynasties (420-589). In Song Dynasty (960-1279), Li Bing and his son were awarded as kings in succession by Song emperors, hence the name Two Kings Temple. In the temple are enshrined statues of Li Bing and his son, valuable famous remarks about water control and tablet inscriptions given by poets.

Fulong Temple (Unawakened Dragon Temple) Fulong Temple is located in Lidui Park and faces a pool below. Legend has it that during his flood control, Li Bing had subdued a dragon and had it under the Lidui. The existing temple is consists of three halls, the front of which possesses a Stone Statue of Bi Bing built in Eastern Han Dynasty (25-220). In the temple, there is also a precious remain of female Taoism priests Jinxian and Yuzhen (both are princesses of Tang Dynasty (618-907)), the Feilong Ding (Flying Dragon Ding, an ancient cooking vessel). 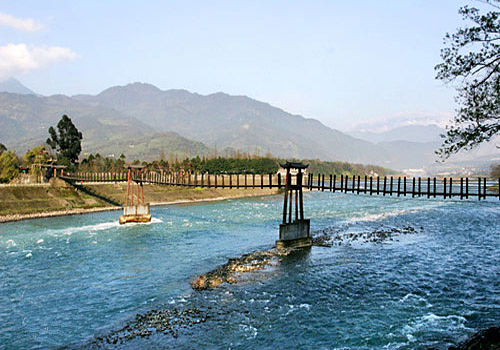 Also named as Couple Bridge, Annan Bridge is located on Fish-mouth Dyke of Dujiangyan Irrigation System and stretches across both inside and outside rivers. It is hailed as one of the Five Bridges of Ancient China and is the most characteristic landscape of Dujiangyan. The previous bridge was built before Song Dynasty which was unfortunately destroyed in the war in late Ming Dynasty (1368-1644), and during the rein of Jiaqing (1796-1820) in Qing Dynasty (1644-1911), Annan Bridge was rebuilt with woods supported by stone piers and for a length of 500 meters.