Your Position: HomeChina NewsHigh-speed destinations for the holiday

High-speed destinations for the holiday

With the fast expansion of China’s high-speed rail network, cities that were considered far from Beijing are now only a short ride away. Taking trains that can travel up to 350 kilometers per hour, one will find China is a bit smaller than it used to be.

China already has the world’s longest high-speed rail network, with about 9,300 kilometers of routes in service. The fast speed, convenience of online ticket booking, and brand-new mall-style stations for the high speed rail make riding the train enjoyable, in contrast to the formidable image associated with China’s railways of the past.

As the Qingming festival holiday draws near, it’s time to plan a tour on the high-speed train and explore cities not far from Beijing.

As Beijing’s neighbor, Tianjin is the easiest destination for Beijingers. It takes only thirty minutes for a high-speed train to cover the 130 kilometers between Beijing South Railway Station and the Tianjin Railway Station.

But be careful not to book a ticket to the newly-built Tianjin South Railway Station, or you will find yourself in the middle of nowhere and having to rely on the mercy of black-market taxi drivers.

On the contrary, Tianjin Railway Station is in the center of the city next to the scenic Haihe River.

Within walking distance from the station is the Italian Tourism Zone, a trendy area developed on the former Italian Concession, which is the best-preserved quarter of Italian architecture outside Italy.

In this unique area you will find restaurants, bars, museums and galleries housed in historic buildings. Of special interest to some is the memorial of Liang Qichao (1873-1929), a scholar and reformist who played an important role in China's modern history. 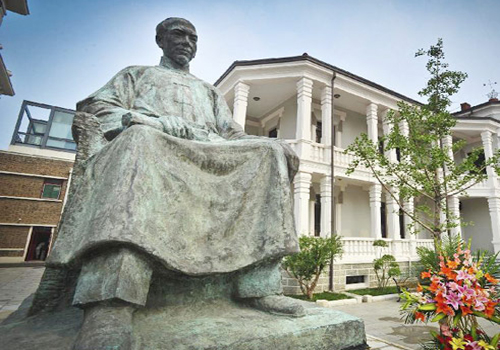 The memorial consists of two neighboring buildings designed by Liang himself. One was his residence and the other his study known as "Ice-Drinker's Studio.”

It may be hard to believe, but there was a time when Tianjin once contained concessions from nine countries. Although Chinese people may feel ambivalent about that period of history, the various buildings leftover from that period have become part of the city’s heritage.

Stroll across the Haihe River from the Tainjin Railway Station, and you will find yourself on Jiefang Road, which used to be where Chinese and international financial institutions congregated in the late 19th and early 20th century. 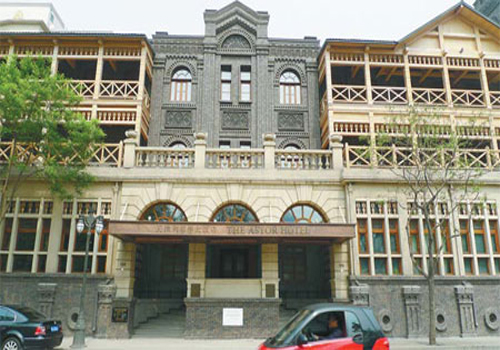 (Jiefang Road is like an open-air museum for old architecture, like the Astor Hotel. Provided to China Daily)

HSBC, Standard Chartered, Citibank, Russo-Asiatic and many other business institutions were once located along the old road. Although the companies are no longer operational in this particular area, their original buildings make the road an open museum of architecture.

If your budget allows, spend a night at the Astor Hotel located on on the historic road, which was built in 1863 and boasts the first lift in China, or the Peace Hotel on the quiet Dali Road, where Mao Zedong once stayed.

For the Chinese side of Tianjin, go to the Gulou area or Ancient Cultural Street to shop for traditional handicrafts. You can also eat famous Tianjin snacks like baozi (steamed stuffed buns) and mahua (fried dough twist) on what is known as Food Street.

If you understand Chinese, don’t forget to go to a teahouse to watch some grassroots cross-talk performances, a Tianjin’s specialty.

Capital of Shandong province, Jinan is an unassuming city often neglected by tourists. However, the city offers more than one might expect.

Jinan is nicknamed "City of Springs" because of its abundant supply of artesian springs. Most of the springs, many of which have been historically listed under the "72 Famous Springs,” are located in the downtown district and flow north where they later converge in Daming Lake. 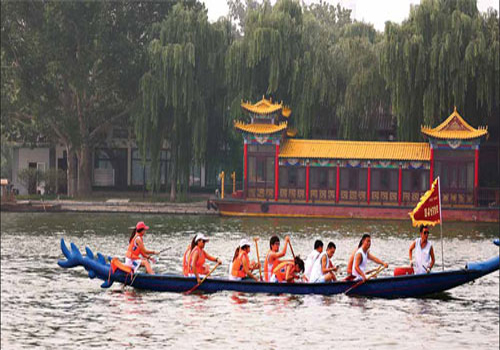 (The annual boat race held at Daming Lake, a water mass created by the convergence of hundreds of springs. Photos by Ju Chuanjiang / China Daily)

The Baotu Spring Park is Jinan’s most popular tourist site. Baotu means "jumping and leaping", because the water in the spring pool can be seen foaming and gushing, taking on the appearance of a pot of boiling water.

The spring was visited by the Emperor Qianlong (1711–1799) of the Qing Dynasty (1644-1911) who declared it "the first spring under the heaven". A tablet upon which the Emperor wrote "Baotu Spring" stands beside the spring pool.

Baotu Spring is the most famous spring in Jinan, but it’s the more down-to-earth small springs that dot the old districts that give the city its personality.

The late-Qing author Liu E describes Jinan's cityscape in his novel The Travels of Lao Can as, "Every family has spring water, every household has a willow tree.”

Now maybe not every family has spring water, but if you stay at the Pearl Spring Hotel, you can enjoy the accompaniment of a spring in the courtyard.

Walk outside of the hotel and follow a small alleyway to the west and you will see traditional houses that seem unchanged from centuries ago. Walk further and suddenly you will find yourself in front of a big spring pool in the heart of the alley.

This is Zhuoying Spring, or more colloquially known as the Wangfu Chiz (Pool of the Prince’s Household). The combination of the pool and the houses beside it both create a picture right out of Venice, Italy. People swim in the pool throughout the year, as the spring water is warm in winter and cool during the summer. If you don’t feel like partaking, you can watch people play chess by the pool while enjoying the atmosphere of old Jinan.

When you have worked up a healthy appetite, you can visit the nearby Furong Alley, where you will find something interesting in the restaurants and stalls offering food from all over China. In the alley there is a small temple worshipping the god Guangong, in which you can also find a small spring.

In April when spring comes and willows turn green, it’s a good idea to drink tea at a teahouse beside Daming Lake, or ride in a boat to around Jinan’s moat, one of the few in China currently in existence. Anyway, regardless of what you do in Jinan, most of your activities will be associated with water.

Xi’an used to sound like a remote place from Beijing reachable only by airplane, but now the high-speed train takes you there in about 5 hours. If you get up early enough, you can even leave in the morning and arrive in Xi’an just in time for lunch.

Xi’an is the capital of Shaanxi province, but more importantly, it is an ancient capital of China, having held the position under several of the most important dynasties in Chinese history, including Western Zhou (c. 11th century-771 BC), Western Han (206 BC-AD 24), and Tang (AD 618-907).

With more than 3,100 years of history, Xi'an is also the eastern terminus of the Silk Road and home to the Terracotta Army, which is undoubtedly the most popular attraction in the city. 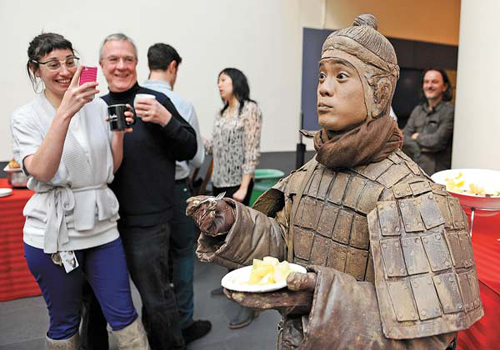 (A man clad as a Terracotta Warrior draws visitors' attention to the first major US exhibition of relics of the Qin Dynasty (221-206 BC).[Photo by Chen Gang / China News Service])

The Bell Tower and Drum Tower, located in the city’s central axis, is a good area to stay in. Although the drum and bell no longer announce the official time, the structures still provide one with a historic feeling.

The area is close to Muslim Street, which is full of Muslim restaurants. Here you can taste authentic Xi’an snacks like soup dumplings and pita bread soaked in lamb soup, among many other delicacies.

The mosque is completely Chinese in its construction and architectural style, except for some Arabic lettering and decoration, showing the efforts of Muslims acculturating to the local culture.

A popular tourist site of Xi'an, the mosque still functions as a place of worship and you may see Chinese Muslims congregating to pray if you visit at the right time.

Xi’an contains hundreds of royal mausoleums and tombs from different dynasties. The city also has numerous ancient pagodas and is noted for its stele forest, which is housed in an 11th-century Confucian temple containing large stone tablets.

One of the easiest ways to take in Xi’an’s history is to take a walk on its well-preserved city wall, which was re-constructed in the 14th century and still surrounds the historical city’s downtown area.