April will see the kick off of a project to improve environmental conditions on Mount Wutai, one of four sacred Buddhist mountains in China, the local government stated on Tuesday.

It is hoped that the project, to be completed in July, will greatly improve the environment in the temple-dotted Taihuai town, center of Mount Wutai's scenic area, in North China's Shanxi province. 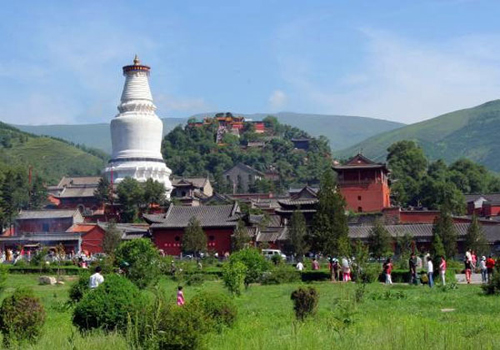 Liu Binglong, head of the Mount Wutai Administration Bureau, said that the work, expected to cost more than 100 million yuan (about 16 million U.S. dollars), involves regulating of the 28-km-long Qingshui River in Taihuai, through means including embanking and dredging.

He said that the local government plans to decrease air pollution by laying pipelines and restoring gas-holder stations. In addition, it will continue providing subsidies to encourage the use of anthracite instead of bituminous coal.

"Afforestation is a big part of the project, and a 22-km-long green belt will be completed by the end of the July," according to Liu.

In addition, the local government will supervise religious activities on Mount Wutai, and anyone that deceives tourists into paying over the odds for incense will face punishment.

In February this year, two illegal temples in the mountain area were closed and six people were arrested over illegal funding. The suspects hired fake monks to deceive tourists into donating money, buying expensive incense and paying unreasonable amounts for ceremonies.

Added to UNESCO's World Heritage List in 2009, Mount Wutai is home to about 50 Buddhist temples built between the 1st century AD and the early 20th century.

The attraction is in Wutai county, Xinzhou city in Shanxi province, 230 km from the provincial capital, Taiyuan city.

Preview News: Tourism boost for Russia and China
Next News: High-speed destinations for the holiday