1. Qinghai Lake: sea in the heart of the land (Qinghai) 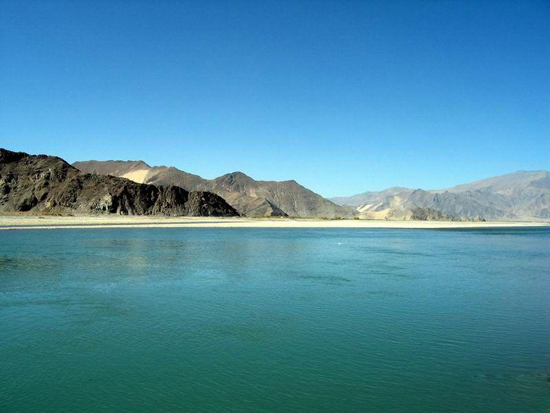 Qinghai Lake, literally translated The Clear Lake is located in Qinghai Province; it is China's largest and highest landlocked salt-water lake sitting at 3,195 meters above sea-level and covering an area of 4,583 square meters, with an average depth of more than 19 meters. The lake itself has many estuaries and outlets including The Ganzi River, Shaliu River, Black Horse River and Buha River. Qinghai Lake is famous for its abundance of fleshy, strongly-flavored carp with is caught and barbequed freshly on the edge of the banks of the lake. There are several islands dotted throughout the lake, most of which are home to unique birdlife, hundreds of thousands of wild birds flock to Qinghai Lake in spring.

Best season for visiting: all the year around. 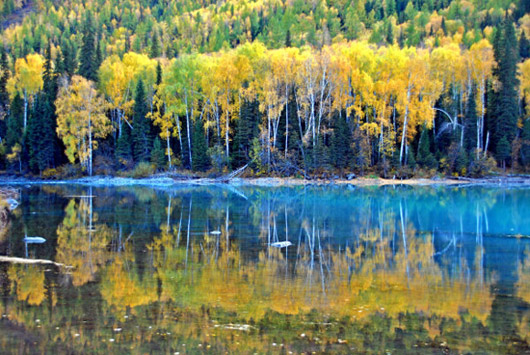 The Kanas Heritage Area lies within a region full of mystery and myth, stories go that within this heritage region there a monster that lives within the lake, as well a fairy princess that lives within a secret cabin hidden somewhere within the wilderness. Light fog and smoke emanating from the chimney mesmerizes unaware travelers and prevents them from living Kanas! May is an ideal time to visit this beautiful untouched paradise with the aroma of spring still thick in the air.

Kanas is so unique in China because it captures so many different ecosystems into one large region, different parts of bordering onto Kazakhstan, Russia and Mongolia all can be found within the area and large Siberian Pine Trees grow. The fauna and flora that exist here are largely unique to this region and cannot be found anywhere else, drawing noted botanists and zoologists from across the globe to study the unique environment.

Kanas in Mongolian translates as an area of profound beauty shrouded in obscurity, and its location in the very northern county of Xinjiang in far north China ensures that it is obscure. Lake Kanas itself is fed by the runoff from several large glacial mountains that surround it, including the amazing friendship peak; the water flowing into the lake is a stunning clear blue which contrasts to the lush green virgin forests that surround it. The lake is located on the plateaus of Xinjiang 1374 meters above sea-level and reaches a depth of over 180 meters at its deepest point.

One of the most incredible sights available to visitors to Kanas is the sight of a full or waxing moon hanging over the lake casting its perfect reflection in the lakes still waters and breathing in the still fresh air of wild, untouched China.

The inhabitants of Kanas are mostly Mongolian and believe that this lake has an incredible spiritual significance as well as being the source of their livelihood. The people here do not search for modernity they are content with a simple subsistence existence that includes herding sheep, living in simple wooden huts and washing in the lake, they are known by people as the people who "live within the scenery".

Best time for visiting: from July to middle September.

3. Namtso Lake: the place to whisper in god's ear (Tibet) 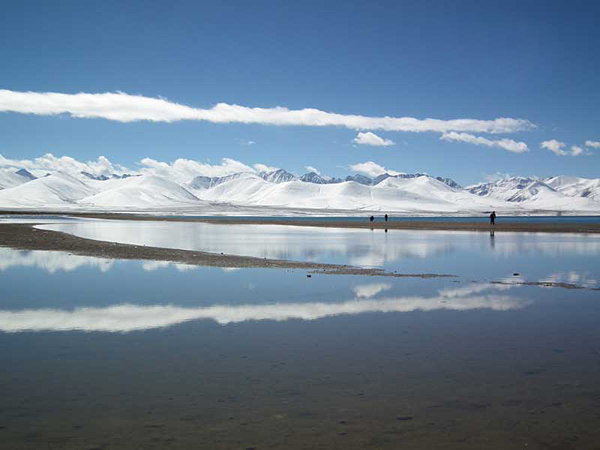 Namtso Lake is the most impressive, visually stunning lake in Tibet, located near the capital Lhasa. One side of the lake quickly rises into steep mountains with the other two sides easing into boundless Tibetan plateau. The lake is not wide, measuring just 30 kilometers across but stretches 70 kilometers long, in total taking a total area of 1940 square meters.

Lake Namtso was created by ancient tectonic shifts between plates creating a deep basin that soon filled up with water, in combination with continued glacial activity this water basin become permanent and the lake was created. Lake Namtso now sits as the world's highest lake at 4718 meters.

In Mongolian Namtso translates as Sky, because the lakes' spectacular blue color matches the cloudless blue sky above it, with the snow covered mountains surrounding it providing a most spectacular visual spectacle, there are three islands within the lake, one a peninsular with a natural limestone bridge connecting it to the lake-side.

In the colder months Namtso Lake is covered in a thick sheet of ice which only begins to thaw at the start of May, the sound of the ice-sheets cracking can be heard for several miles. The lake is also rich in natural minerals which have yet to be exploited. Some fishes here still preserve the original feature and also have developed with the altitude environment.

In the winter months herders will drive their sheep to the shores of Namtso Lake to gain protection from the freezing wind as well as to get water, the mountains behind the lake act as a natural barrier to the wind. In the summer months the lake literally blooms into life, with wild rabbits and sheep grazing and living near the lake as well as the abundance of fish which spawn in late spring, while herders again bring their stock, especially horses to this area to raise them. Namtso Lake has become a vital part of the life of the Tibetan people and is truly one of China's five most beautiful lakes.

Best time for visiting: from July to September.

Changbai Shan's most famous travel destination is the 'Heavenly Pool', it's said that if you have not visited the Heavenly Pool then you haven't visited Changbai Mountain. The lake is the remains of an ancient volcanic crater that has filled up with water, located at 2150 meters above sea-level its closeness to heaven has been cited as the reason for its name.

The scale and surreal nature of the Heavenly Pool is what attracts so many tourists to visit it, with a depth of 373 meters the water is an intense deep blue, the lake is surrounded by 16 snow-covered peaks, the whole area is prone to wild and violent changes in weather which can go from placid to a wild-hail storm within the space of an hour, adding to the untamed nature of the area.

Best time for visiting: from July to September. 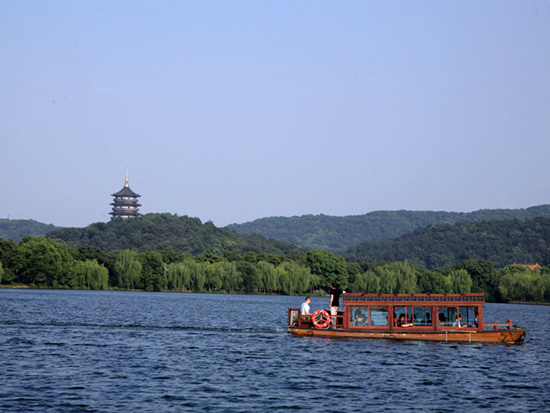 Xihu (the West Lake) is one of China's undisputed premier travel destinations; it has been hailed to the point that it has been called 'heaven on earth'. The West Lake Scenic Area is comprised of two dikes, three islands and ten major scenic lookouts making it a place that visitors can explore endlessly.

Best time for visiting: all the year around.
Main Attractions:

Three Temples reflecting the moon (San Tan Yin Yue): a collection of amazing imperial totems sitting upon the lake, and the three temples that sit next to them, the temples are 2 meters high and are supposed to combine with the reflection of the moonlight to enhance the beauty of the lake.

Ping Lake Autumn Moon (Ping Hu Qiu Yue): An imperial library building lies on the banks of this mystical lake, when the moon is full a most spectacular view of the lake and the moon itself can be gain from this small ancient building.

Broken Bridge snow falls (Duan Qiao Can Xue): legend suggests that two lovers-Lady White Snake and Xu Xian first met on this bridge however their ill-fated love never materialized, much like a Chinese version of Romeo and Juliet, today it is a very popular place for tour groups to take pictures, not least because it offers amazing views of the lake.