Wushan here refers to the county which is located in Chongqing municipality. It is the vital part of Three Gorges area of China, the east gateway of Chongqing as well as the way which must be passed on a Yangtze River tour. 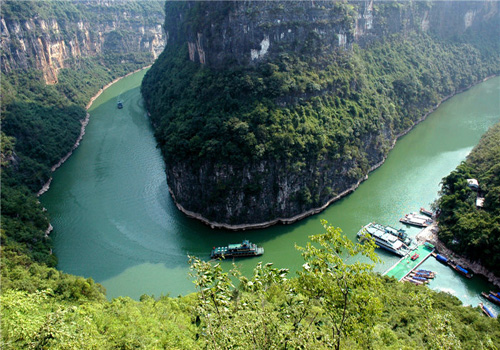 Wushan County is famed for its rich cultures and beautiful sceneries. A place in Wushan named Longgupo (literally "Dragon Bone Slope"), where the Wushan Man was found, is the birthplace of Asian human beings. And the Man there can be dated to around two million years ago. There are also many historic sites in the county including ancient paths along cliffs built between the end of Qin Dynasty (221–207BC) and the beginning of Western Han Dynasty (206BC–24AD), the thousand years-old hanging coffins on cliffs and the tombs of Han Dynasty. In addition, the Small Three Gorges, the Wu Mountains which with Goddess Peak as the representative spot are only a few of the beautiful natural sceneries in Wushan.

Located between Wushan County of Chongqing municipality and Badong County of Hubei Province, Wu Gorge is the most coherent and neat one among the Three Gorges. Passing the 42 kilometers gorge on a ship is just like in a beautiful gallery: Yangtze River twists and turns through the magnificent mountains, the gorge is long and the valleys are deep, the towering peaks are shrouded in mists and clouds...scenery there is extremely poetic and picturesque. The most famous scenic spot of Wu Gorge is the Twelve Peaks of Wu Mountains situated on the north and south sides of Wu Gorge, while the Goddess Peak is the most beautiful one among the twelve peaks.

Besides the Twelve Peaks of Wu Mountains, the Lu You (1125–1210AD, a prominent poet of China's Southern Song Dynasty) Ancient Cave, Yu the Great (or Da Yu, a legendary ruler in ancient China known for his introduction of flood control) Book Accepting Stand, Goddess Temple Site, Kongming (or Zhuge Liang, a chancellor of the state of Shu Han during the ancient China’s Three Kingdoms Period) Stone Tablet are famous historic and cultural sites of Wu Gorge.