Registered as the two longest rivers of China, the Yangtze River (Chang jiang) and the Yellow River (Huang he, 黄河) are the two mightiest rivers of China, cradles of the nation’s history, culture and civilization. Starting from this first similitude, a focus on the two sister rivers is an interesting point to develop.

Topographical similitudes
Taking its source in the Bayan Har Mountains (Qinghai Province) for emptying in the Bohai Sea (northern China), the Yellow River is sharing the same headwater location with the Yangtze River and the Mekong in the national protected area of Sanjiangyuan ("Three Rivers' Sources") National Nature Reserve (SNNR). Mother land of the three mightiest rivers of China, the source is definitely the starting point of the fabulous odyssey through which China has developed and become one of the earliest civilized countries on earth. Like the Yangtze River, the Yellow River crosses a great amount of Provinces (9 against 11 for the Yangtze) and is the land of some of the first cultures and civilizations that developed in the Chinese territory. Divided in three different reaches, the two rivers display some similitudes even if the Yangtze, located in a milder climate and greener land area was the one where most of China’s earliest rice agriculture developed. Huge resources for the production of hydroelectricity providing China with a large amount of its energy needs, the Yangtze and Yellow Rivers are likewise, two strong rivers of China where dams, modern bridges and cruises have developed extensively in the last century. 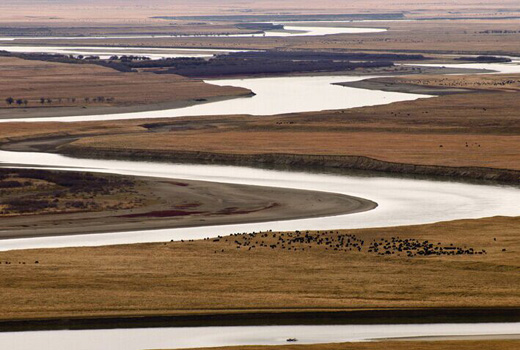 Two cradles of China History and Culture
Like it was seen in other places in the world, the world’s earliest civilizations started to develop near to fertile lakes and rivers suitable to human activity. In the Asian continent and especially China, if there is a river that has been home to the Chinese Civilization, the Yellow River is definitely the one that people may refer to. Real mother-land of China where the earliest traces of human occupations were found, the Yellow River is with the Yangtze likewise the two rivers testifying of the origins of Chinese people. Compared to its southward sister, the Yellow River is the birthplace of some of the earliest civilizations and kingdoms that started to conquer China from east, west and south. Victim of their fertile land, the extensive use that is made on their banks since the industrialization of China in the middle of the 21st century is now one of the biggest problems that the country is facing. Still, these two mother lands of China are today the real backbones of the nation’s identity and will continue to nourish China’s rapid development.