Located at the entrance of the Qutang Gorge on the north bank of the river, 8 kilometers (5 miles) away from Fengjie county seat, Baidi city, also known as White Emperor City clings to grandeur hills and cliffs. It is actually a mini city scattered with temples and gates on top of Baidi Hill. The Baidi City was built by Gongsun Shu, an official turned soldier, as the site of his headquarters during the end of the Western Han Dynasty. The legend goes that in 25 A.D. Gong Sunshu saw white vapor in the shape of a dragon rising from a nearby well, and taking this as an auspicious omen, he declared himself the 'White Emperor' and renamed the town 'White Emperor City' and the hill Baidi Hill. Later in 36A.D. he raised a war with Liuxiu (Emperor Guangwu of the Easten Han Dynasty), then a member of the Han imperial family, in order to annex his territory, in this turbulent period, the city was entirely spared from warfare. The grateful local people built a temple to commemorate him. During the Ming Dynasty, the statue of Gongsun Shu was replaced by a new one for Liu Bei and later with another three for Guan Yu, Zhang Fei and Zhuge Liang respectively. 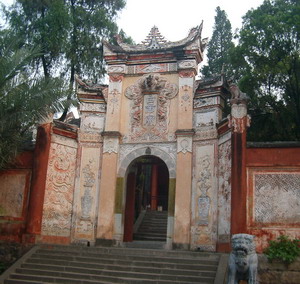 That is a story about the Three Kingdoms. During the Three Kingdoms Period, Liu Bei, the king of Shu, retreated from a disastrous war against general Lu Xun of Wu Kingdom, and died here in distress. On his deathbed, Liu entrusted state affairs and his son, Liu Chan, to Prime Minister Zhuge Liang (a famous idea man in China's history). The front hall contains large modern statues, which depict the scene in the story. To the left is the handsome, winged Observing Stars Pavilion (Guanxing Ting) where Zhuge Liang observed the stars and made accurate weather forecasts, which helped him plan his victorious battles. With upturned eaves and polished beams, the temple has 12 pillars on the ground floor and 6 on the upper floor.