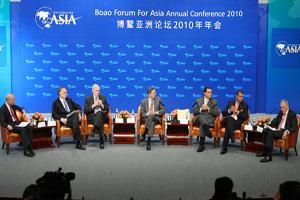 Boao Forum for Asia, abbreviated BFA, is a non-government and nonprofit international organization, which is committed to promote regional economic integration and bring Asian countries even closer to their development goals. It is a high level forum for leaders from government, business and academic of Asia and other continents to share their vision on the most pressing issues of economy, society and environment in the region and the world.
BFA was formally inaugurated in February 2001 by 25 Asia countries and Australia, and held its first meeting on April 12-13, 2002. It has its fixed address in Bo’ao, Hainan Province and the Secretariat in Beijing.