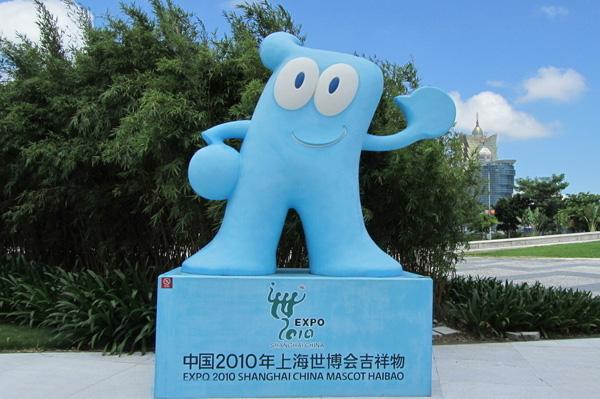 Time: May 1, 2010 – Oct 31, 2010
Host City: Shanghai, China
Theme: Better City, Better Life
Mascot: Haibao, an imaginary blue little person
Emblem: A modified Chinese character世 (means the world) to represent three people together with the 2010 date.
2010 Shanghai Expo was held on both banks of the Huangpu River. It was the largest World’s Fair with an area of 5.28 square kilometers. About 240 countries and international organizations had participated in and over 73 million people had visited.
13 World Records of 2010 Shanghai Expo
a. 2010 Shanghai Expo involved in the most countries and regions.
b. 2010 Shanghai Expo involved in the most volunteers.
c. Exhibition halls were self-built and about 40 countries and international organizations built their exhibition halls themselves in Shanghai Expo; it was the expo with the most participants in history.
d. The solar panel area of the roof covering of the Theme Pavilion is more than 30 000 square meters, which is the largest monomer roof solar panel in the world.
e. The wall of the Theme Pavilion is the largest ecological green wall in the world with an area of 5000 square meters.
f. It is an Expo with the most reserved old buildings of the area.
g. It is the largest Expo with an area of 5.28 square kilometers.
h. It has the largest crystal matrix with 30 000 crystal displays.
i. It is an Expo with a direct investment of 28.6 billion RMB, and of about 30-40 billion RMB if the supporting facilities added in, e.g. bus stations.
j. It is an Expo with the most visitors of more than 73 million in history.
k. On October 16, 2010, the expo set a single-day record with over 1.03 million visitors.
l. It is the first Expo with an Expo Online.
m. It is an Expo with the largest monomer quantity of about 8000 lavatories of more than 30 restrooms.