As a quintessence of Chinese culture, Mahjong has a very long history and favored by hundreds of thousands of people in China, especially in Chengdu, Chongqing, Wuhan, Shanghai, Guangzhou, Hong Kong, Hangzhou, Changsha, Kunming, etc. Nowadays, Mahjong has been internationally introduced into many other countries, but basically it stays in Chinese people, so Mahjong can be the card of Chinese. Chess and card games now are listed in sports games, which makes Mahjong the absolutely No. 1 sport of China. Compared with Mahjong, all the other sports like Ping Pong or Badminton of China, just are something not that significant.
Mahjong is a popular competitive game in China. As it is played with tiles, similar to those used in dominoes in physical description but engraved with Chinese symbols and characters, Mahjong is also playfully called a game to "move" or "lay" bricks. Legend says that mah-jong was invented by an ancient Chinese strategist who used tiles to mock battle formations. 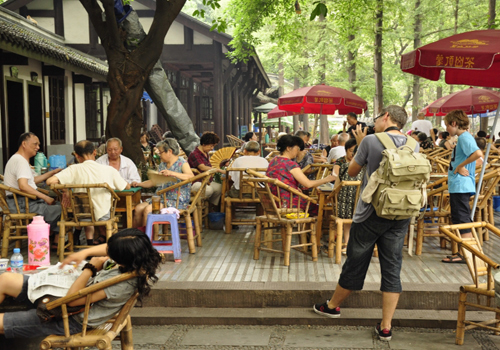 A full set of mah-jong consists of 144 tiles, including 36 sticks (or bamboos,numbered 1 to 9, 4 of each number), 36 dots (or circles,numbered 1 to 9,4 of each number),12 hounours (4 red,4 green,4 white dragons), and 16 winds (4 east,4 south, 4 west, 4 north winds). There are also eight flowers,which are added in the middle of a Mahjong game.
Mahjong is just a game can be played by four persons, but it reflects a place’s culture, as well as the character and quality of the place. As different places raise different people, and Mahjong is shaped by the people in different lands, Mahjong is played differently in China’s broad land. Today I will introduce you with some cities’ very interesting Mahjong culture.
Mahjong in Shanghai - Simple and Fare. Shanghai is a highly commercialized modern city with a long history deep influenced by western countries. The citizens are from all around the country. Shanghai Mahjong emphasizes on the communication of people, not win or lose.
Mahjong in Chengdu - A city loves Mahjong the most. Everyone in China knows Chengdu people like to play Mahjong, and Mahjong truly makes the city a great place for leisure and relax. You know that Chengdu is down there in the plane if you hear the sound of playing Mahjong.

Mahjong in Hong Kong - Most favored by gamblers. Hong Kong people make their Mahjong more systematic and complicated, not easy to win but get more money if wins, which fully reflects their brilliant ability of learn and integrate.
Mahjong in Hangzhou - Astute, Intimate and Human. They need to see what other people have in hands after finishing every game to clarify if someone cheated - astute. They have a rule that, in four games, if some one loses some certain money settled by them, he does not need to pay the extra money - intimate and human.
These are some typical cities love to play Mahjong. But Mahjong Culture in China is so extensive and profound that even a small county has its own methods and specialty. Mahjong is easy to learn if some one teaches you in person. It is really a very interesting and special game to play, especially during which you can share everything with your friends, or discuss cooperation with your business partners.
- Xavier (Visit Our China)
Tags: Mahjong Culture in Shanghai Hong Kong Chengdu Hangzhou