Seated in the deep of southwest China and the upstream of Yangtze River, Sichuan Province enjoys preferable magnificent natural sceneries as well as a profound culture blended that of both the Chinese east and west nations. The magic Jiuzhaigou Valley, the famous Buddhist mountain of Emei, the Research Base of Giant Panda and the oldest dam of Dujiangyan are the most popular things in people’s mouths. Also, Sichuan is a popular destination for the exploration for the extended southwest ethnic culture along the Yunnan Province.
According to a recently released statistics, the number of tickets sold by 18 leading newspapers in China, there are six most popular tourist attractions in Sichuan that included in the list of the 100 Most-visited Tourist Attractions in China. The statistics shows that about 2.65 million people flock to Mount Emei annually.
1. Mount Emei 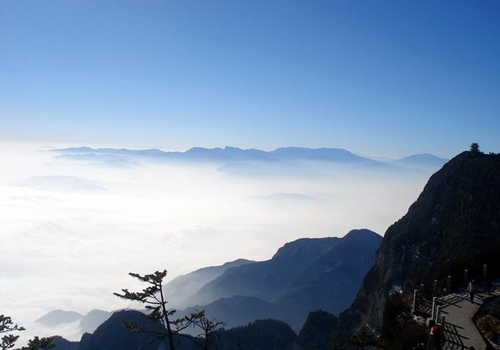 It is the Mount Emei (Chinese:峨眉山) that receiving the most visitors in Sichuan Province. This renowned attraction was listed into the UNESCO World Heritage Sites in 1996 for many natural and cultural heritages. It also belongs to the Four Sacred Buddhist Mountains of China, and is the highest one among the four with a height of 3099m. Mount Emei enjoys many reputations like "Vegetable Kingdom", "Animal Paradise" and "Geological Museum". Some people come to Emei for a religious culture because the mountain is originally a Taoist retreat that later converted to Buddhism with the patron Bodhisattva Puxian (普贤菩萨), or Samantabhadra; some come for beautiful landscapes and its various ecological environment with over 3000 species of plants; while some come to play with the naughty monkeys as the mountain is the home to many Tibetan macaques. No matter what is your interest, the scenery along the climbing in Mount Emei is just a delight for everyone.
2. Leshan Giant Buddha 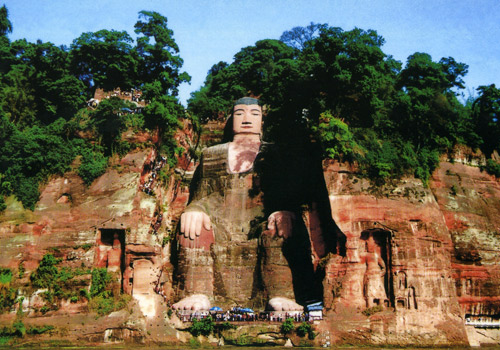 Leshan Giant Buddha (Chinese:乐山大佛) is located in a small city of Leshan, which is just 20 kilometers from the gorgeous Mount Emei. Leshan Giant Buddha is a sitting Maitreya Buddha and famous as the largest stone sculpture of Buddha in the world. According to the records, the carving work started in 713 of Tang Dynasty (618-907) and ended in 803, lasting for 90 years. It is a large-scale masterpiece that had involved in several generations, and perhaps, some people had worked for it with their lifetime. The Giant Buddha is definitely amazing and awe-inspiring. It is 71m high, 28m long if measured by shoulders, and 14.7m long and 10m broad of the head. It is also a marvel that the big statue has undertaken many earthquakes without any moving or even a tiny damage. Besides, on the rocks and climbing paths of the two sides of the Buddha, there are also many preserved stone inscriptions and Buddhism statues made in same period.
3. Dujiangyan Dam 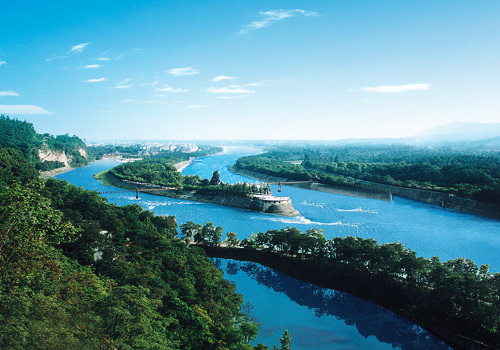 It is said that Dujiangyan Dam (Chinese:都江堰), which also called Dujiangyan Irrigation System was built by the chief executive of the present Chengdu of Qin State, Li Bing (李冰) around 256BC during the Warring States Period (475BC- 221BC). It is the oldest but the only surviving no-dam irrigation system in the world under the national protection. More than a large scale world-famous ancient Chinese irrigation system, Dujiangyan Dam is a famed scenic spot that connected with the Mt. Qingcheng scenic spot with beautiful landscapes and a large number of cultural relics and historical sites, such as Yulei Path, Lidui Park, Fulong Temple, Yunv Mount, Cuiyue Lake, etc.
4. Jiuzhaigou Valley 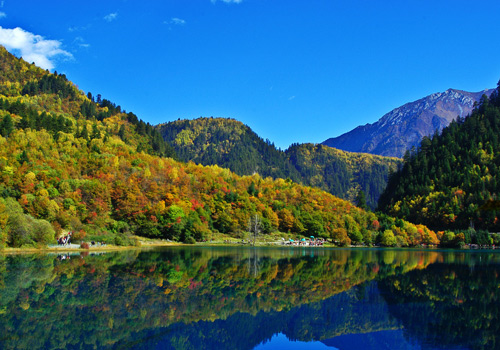 Jiuzhaigou Valley (Chinese:九寨沟) is a part of the Jiuzhaigou County situated in the Ngawa Tibetan and Qiang Autonomous Prefecture of the Sichuan Province. It gets its name from the nine Tibetan villages (jiuzhai in Chinese) in the area. It is a key national natural reserve that listed into the world heritage sites with five wonders, namely, green waters, overlapping waterfalls, colorful forest, snow peaks and Tibetan customs. Jiuzhaigou is a high tourist destination as a primeval forest over 2000m above the sea level with 108 lakes. Enjoying the fame as a fairyland picture, every visit in Jiuzhaigou is sweet and the sceneries are always charming and marvelous in all seasons owing to the unique ecosystem and a temperate climate in the area. To many visitors, autumn is most beautiful season in Jiuzhaogou Valley with colorful leaves mirroring in the bright blue waters together with the blue sky and white clouds. The scenic spot consists of three different valleys: the Rize Valley, the Zechawa Valley flowing into the third Shuzheng Valley making a Y shape.
5. Mount Qingcheng 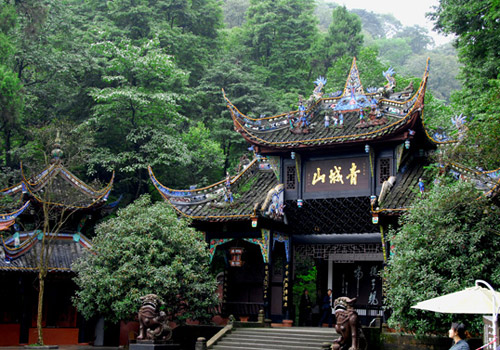 Mount Qngcheng (Chinese:青城山) or Qingchengshan is a famous Taoism mountain, one of the places where Taoism originated. It is located in Dujiangyan City, just 10 km southwest of Dujiangyan Irrigation System, and 68 km east of Chengdu City. Mt. Qingcheng is originally named as Old Man Mountain, and the highest peak is 1600m high, and its present name qingcheng (green city) comes from the evergreen plants in the mountain. From the narrative records by ancient people, there are totally 36 peaks, 8 big caves, 72 small caves and 108 sites in the mountain. The spot is divided into two sightseeing parts, the main part of anterior mountain and the posterior mountain. The anterior part of the mountain is natural beautiful with many cultural and historic sites such as Shangqing Palace, Jianfu Palace, and the Tianshi Cave; and the posterior part is famous for primitive scenery that is more gorgeous and marvelous.
6. Bamboo Sea in southern Sichuan 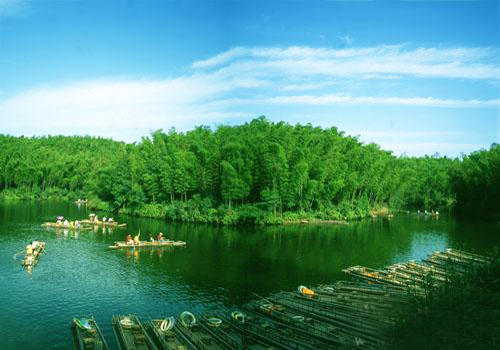 Bamboo Sea in southern Sichuan (Chinese:蜀南竹海) is located in a southern city of Yibin. Covering an area of 120 square km, there are totally 10 scenic areas including 134 scenic sites in the attraction. With a vegetation rate of 87 percent, the Bamboo Sea is just a natural oxygen bar within the most anions in China. About 58 species of bamboo can be found here making an emerald green forest with mountains, caves, lakes and waterfalls, attracting visitors and nearby residents everyday especially in summer. The attraction is also the location for the famed film Crouching Tiger, Hidden Dragon (Chinese:卧虎藏龙).
--- By April (Visit Our China)
Tags: Mount Emei Leshan Giant Buddha Dujiangyan Dam Jiuzhaigou Valley Mount Qingcheng Bamboo Sea in southern Sichuan Chengdu