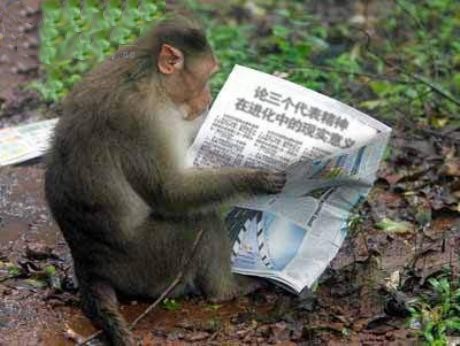 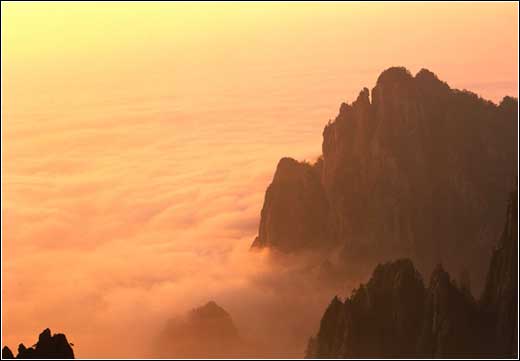 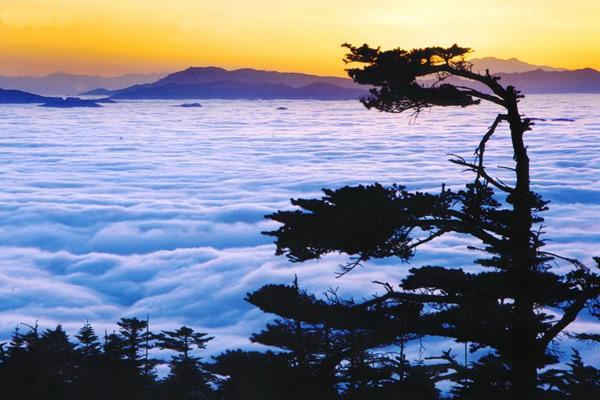 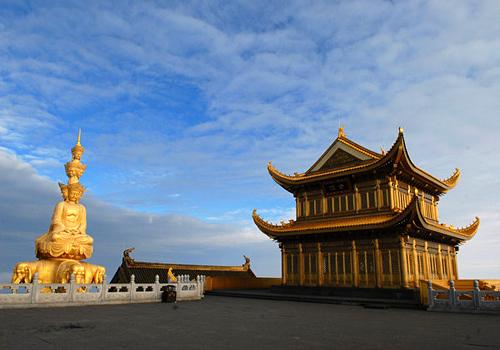 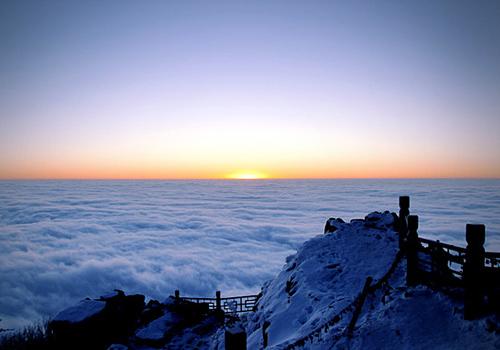 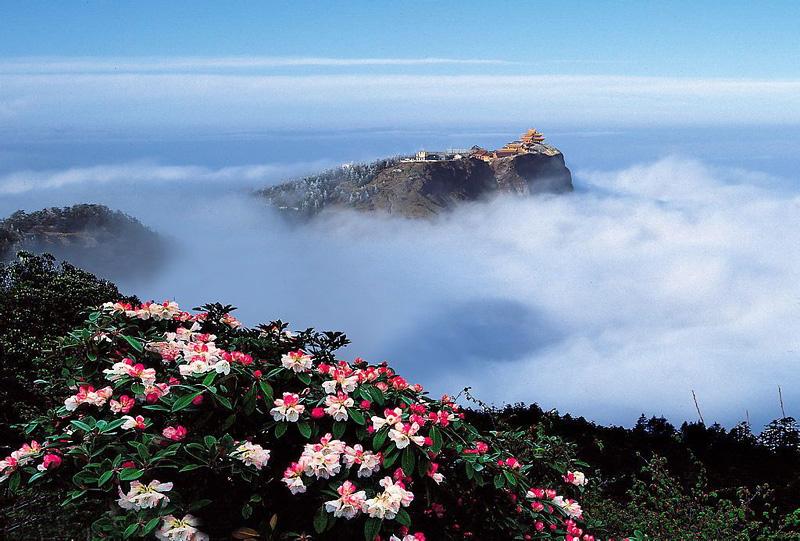 By shuttle bus: Tourists can take the shuttle bus departing every 30minutes at the New South Gate Bus Station of Chengdu to Emeishan city, it takes about 2 hours (about CNY37). If you are in Leshan (where the Leshan Giant Buddha locates), take the bus at the center bus station, they departs every 10 minutes and the driving lasts about 30 minutes (about CNY8).

Note: There are two bus stations in Emeishan city, one is located in the city area and named Jiuzhu Bus Station (九珠客运中心), it is about 6 kilometers to the Mount Emei scenic area, the other is the Tourist Bus Center in the Emeishan Scenic Area. Don’t forget asking for details before to get on the bus. 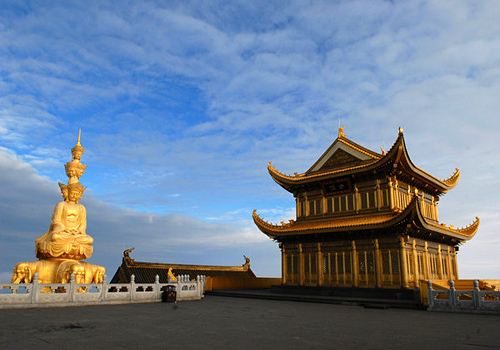 The Mt. Emei is composed of four mountains, Da'e, Er'e, San'e and Si'e (means the four biggest mountains). The Mount Emei we usually talk about is the biggest one; it is over 23 kilometers long and with an acreage of 115 square kilometers. The peak of Emeishan is 3099 meters over the sea level but the plain on the foot of the mountain is on about 400 meters, it is of a much greater relative relief than other famous mountains in China.

Mount Emei is full of natural and cultural heritages. It has the reputation of 'Vegetable Kingdom', 'Animal Paradise' and 'Geological Museum'. It is also one of the most important mountains for Buddhism, with a believing of Samantabhadra Bodhisattva. Over 300 Buddhist monks and nuns are living there and about 30 temples do exist. 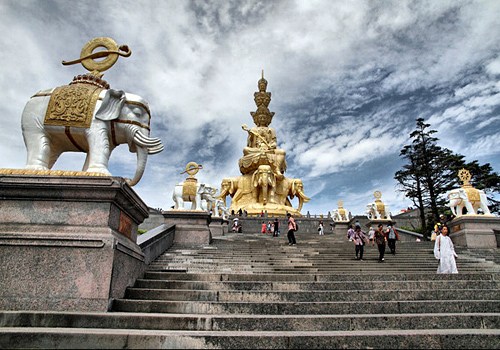 Highlights on the mountain:

- Cultural relics and natural plants: Emeishan is plentiful of cultural relics; over 6890 collections are kept in the temples and museums. The temperature difference between the foot and the top of the mountain is about 14 degrees centigrade which makes the mountain a fairyland for over 5000 plants and 2300 variety of wild animals.

- Sunrise of Emeishan: Watching the sunrise on the Mount Emei is different from others as it is over 3000 meters height above sea level, the best time to enjoy the sunrise is 6:00am during Summer and 7:00am during Winter.

- Sea of clouds: The cloud on the mountain mainly exists in a height of around 2000 meters. No matter guests climb the mountain on foot or by cable cars, the point of transition of the cloud scenery changing is on the Jiulao cave (nine sages' cave). The cloud is on your head before reaching Jiulao cave, you are in the clouds from the Jiulao cave to Xixiang chi (elephant bathing pool), and guests may find the clouds are underfoot from Xixiang chi till the mountain peak of Golden summit. The best time to watch the sea of clouds is between 9:00-10:00 in the morning and 15:00-16:00 in the afternoon. 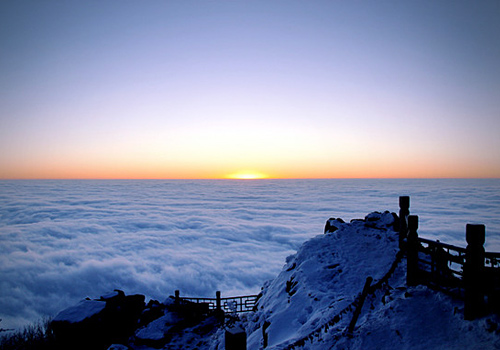 - The Buddha's halo (Brocken bow): When people standing on the golden summit (the Peak of Emei Mountain) and back towards the sun, they may see a colorful halo (red and purple) in foggy days, the one of a man's shadow appearing and disappearing in the halo when he moves. This amazing natural phenomenon is called the broken bow and 'the precious light of Mount Emei'. Although the phenomenon is caused by the diffraction of the sunlight, fog and clouds, Buddhists believe that people who see it have the predestination with Buddha, and they are lucky and blessed by the Buddha and god. The best time to see the Broken bow is between 15:00-16:00 in the afternoon and the natural phenomenon appears about every 5 days on average.

- The vigil light (means the holy lights or the saint lights): The holy light appears only at night, the light shows suddenly in the dark valley, more or less, bright or dullish, floating in the air. The scientific explanation for the vigil lights is mystical; we will never know if it is the wildfire, the lights given by the glowworm or a bacterium shines when raining, but tourists may be considered to be luckier seeing the holy light compared to the Buddha's halo. The best time to see the holy light is on the dark night without moonlights, especially after the raining days in the first or last days every month of the Chinese lunar calendar. The best places people have more chances to see the vigil light include Lingyanshi temple, Fuhu temple, Huayanding, Xixiangchi but the perfect place is the Golden Summit.

More about the famous culture, history and interesting things of Mount Emei: 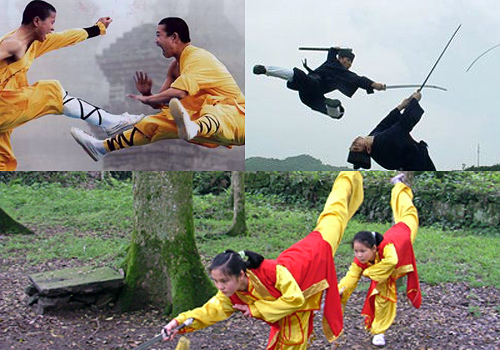 - The Emeishan Monkeys (Ling hou, a kind of monkeys): The Emeishan monkeys live by leafs, flowers and fruits of the plants growing on the mountain. The monkey is among those animals of secondary protection in China. 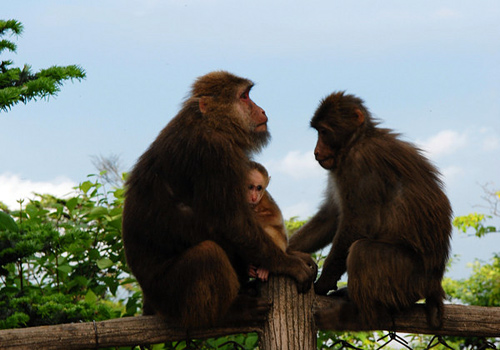 Tips about the monkey during your visits:
1. The monkeys in Mount Emei are spoiled as the monks and tourists here offered them too much food. It is suggested to give the monkeys some peanuts or sweets and then hands up and clapping, in order to show you don't have food anymore. Never fool them or cheat them as they may act wildly and hurt you.

2. Keep some distance while watching and feeding the monkeys. Never touch them! Hide your pocket and packages as they may be robbed by the monkeys.

3. Walk with a big group if possible while walking through the areas full of monkeys and never stay alone. Ask for help if you get attacked by them or protect yourself with some simple weapons like the alpenstock.

- Heaven Sword and Dragon Sabre (or the Legend of Heven Sword and Dragon Sabre): This is a martial arts novel written by one of the most famous writers (Jin yon, 金庸) in China. The Mt. Emei is the base of the Emeipai in many novels (this group of martial art school was mainly grouped by female and used swords as their weapons). The leading male hero in the novel had some love issues with one of the apprentices in Emei genre.

2. By jampan: Lazy man or people with poorer strength can choose it to climb the mountain, it is not cheap, at around RMB30-40 yuan/ kilometer, travelers may bargain with the porters. 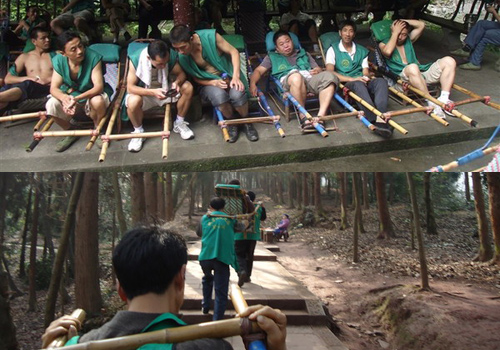 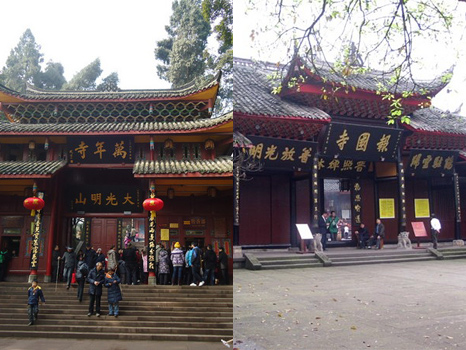 Main attractions of Mount Emei:
- Baoguo Temple (报国寺): It is the biggest temple at Mt. Emei and the center for Buddhism event. Travelers will find the giant porcelain Buddha and huge bronze bell of 25 tons. The entrance fee for the temples in Mount Emei is not included in the entrance ticket fee for the whole scenic area, the visit to Baoguo Temple costs RMB8 yuan.

- Fuhu Temple (the temple of lying tiger, 伏虎寺): The temple is covered by the forest so it is called the lying tiger (or the temple of hidden tiger). Travelers may see one of the top 3 gardens of Mt. Emei - 'Bu jin lin', the top bronze tower of China -'Hua yan tower’ and the biggest hall - 'Arhat hall'.

- Qingyin Pavilion (清音阁): Two of the top 10 sceneries in Mount Emei can be seen here, the Autumn Wind over the Baishui Pool (Shuangqiao Qingyin, 双桥清音) and the ‘The Whisper of the Peaceful Lake’ (Qingyin Pinghu, 清音平湖).

- Attraction sights in the middle of the mountain: The hiker can choose different ways to climb the mountain from Qingyin pavilion, the main attractions on the left include HongchunPing, Xianfeng Temple, and the right one include the Famous Wannian Temple (temple existed for tens of thousands years if translated into Chinese). Both ways end at the same destination - the Xixiang Chi (elephant bathing pool).

- Top 10 views of the Mount Emei:
Ten new views of the mountain include the Golden Buddha on Golden Summit, Ten Thousand Buddhas, the Dengxiaoping's Praise of the Mountain, the Monkeys in Tranquil Valley, Soft Music from Peaceful Lake, the First Pavilion on the Cliff, the Inscriptions on Precipices, the Most Beautiful Waterfall in the world, the Meeting Square and the Staring Point of Great Mountains.

The ten old views of Mount Emei include the Lucky Light at the Golden Summit, the Moonlit Night in Elephant Pool, the Godly House of Nine Sages, the Morning Rain at Hongchun, the Snow on the Daping Peak, the Autumnal Sound at the Double Bridge, the Autumn Wind over the Baishui Pool, the Clouds of Sea on the Luo Peak, the Smoke Cloud in the Thunder Cave, the Jade Bamboo Shoot and the Evening Bell of Shengji. 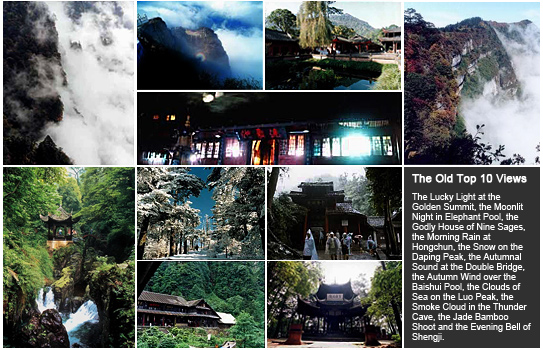