What was the material building the Great Wall? 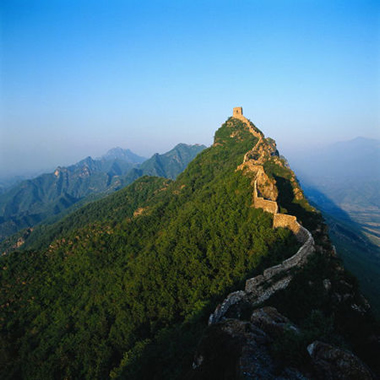 At the beginning the wall (especially in Qin and Han Dynasty) was made mostly from dirt, stones, and wood. The workers compressed huge piles of soil, leaves, hay, and mud into a wall. In the following dynasties, the Chinese changed from an earthen wall only to a wall that was coated by stones, bricks, and granite blocks, making a neat, sturdy long-lasting wall.

During the Ming Dynasty, watch-towers were turned into elaborate structures with tile patterns circling the doorways. Bricks were heavily used in many areas of the wall, as were materials such as tiles, lime, and stone. The size and weight of the bricks made them easier to work with than earth and stone, so construction quickened. Additionally, bricks could bear more weight and endure better than rammed earth. Stone can hold under its own weight better than brick, but is more difficult to use. Consequently, stones cut in rectangular shapeswere used for the foundation, inner and outer brims, and gateways of the wall.

You may be interested in:
How were the messages sent along the wall?

You may interesting in the other kinds of designs for the fortifications on the Great Wall:
passes, Walls, Platforms,Dirt Walls and Stone Walls ,Beacon towers