The myth of Meng Jiang Nv 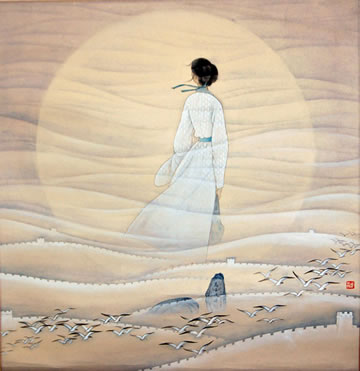 According to Chinese legend, the Meng family - consisting of an old childless couple, lived next door to the Jiang family - also an old childless couple - in Jiangnan. One year, Old Man Meng planted a gourd vine. The vine grew over to the neighbors' side of the fence and bore a gourd there. The Jiang and Meng families decided to split the gourd. When they cut the gourd in half, the old people found a chubby girl child inside. The childless old folk were surprised and delighted. Both the Meng family and the Jiang family wanted the child for their own and started arguing over her. After mediation by neighbors, it was decided that this daughter would belong to both families. She was named Meng Jiang Nv, ("nu" means woman) and the two families raised her together.

When Meng Jiang was grown, she decided to marry a young man named Fan Xiliang. Unfortunately, on their wedding day, soldiers came to take Xiliang away to build the Great Wall. The life of a forced laborer on the Great Wall was rife with deprivation and starvation. When a year passed without any news from Xiliang, Meng Jiang decided to go look for him. She reached the Great Wall after an arduous journey only to be told by the conscripted laborers that Xiliang had been worked to death. The dead workers were buried under the Great Wall. Upon hearing this news, Meng Jiang began to wail loudly and hit the wall. A huge chunk of the Great Wall collapsed, revealing countless mounds of human bones. Meng Jiang Nv bit her own finger tip, testing each skeleton with her own blood, praying for a sign - if the skeleton absorbed the blood, it was her husband's. When she finally found Xiliang's bones, she clung on to them and wept.

The angry Emperor of Qin Dynasty (221 B.C. - 206 B.C.) came to survey the damage done to his project. But when he saw Meng Jiang, the cause of the damage, he was enchanted by her beauty and wanted to marry her. Meng Jiang said she would only marry him on three conditions - first, her former husband was to be given a grand burial; second, the emperor and his court must go into mourning for Xiliang; and third, she wanted to visit the ocean. Much as the emperor hated the idea of officially mourning a commoner, he agreed so he could gain this rare beauty. After Meng Jiang got her third wish, she scolded the Emperor bitterly and cast herself into the ocean. The Emperor sent his men to dredge the ocean but the waves chased them away. It so happened that the Dragon King of the Sea and his daughter the Dragon Princess felt sympathy for Meng Jiang and spirited her away to their underwater Dragon Palace. Then they commanded their army of shrimps and crabs to raise a storm, repelling the Emperor's men.

The Temple of Lady Meng-Jiang, first established in the Song Dynasty about 1,000 years ago, has been maintained and worshipped at the eastern beginning of the Great Wall till this day in Qinhuangdao City of Hebei Province today.