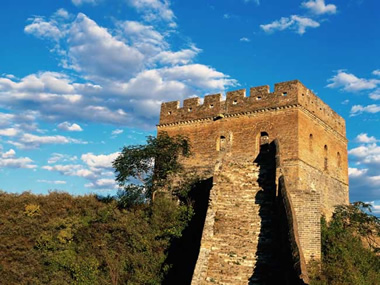 Beacon towers were used for passing military messages. They were often built on the tops of the mountains or rises for convenience in watching the enemies' movements. Due to its unique function, it is regarded as the oldest effective telegraph system in Chinese history. During the daytime, as fire cannot be seen very clearly in the strong sunshine, guarders take advantage of smoke to pass messages. At night, they use fire to do that. According to the times that the smoke is given out or the firebrands are lifted, the soldiers can size up the enemy situation correctly. In the Ming Dynasty, giving off smoke one time (or lifting one firebrand) together with a gun shot suggests there are about one hundred enemies. Additionally, the layout of the beacon towers is also very important. They were often built on dangerous peaks or wandering paths. And also the neighboring two of them can see each other very clearly.

You may interesting in the other kinds of designs for the fortifications on the Great Wall:
passes, Walls, Platforms,Dirt Walls and Stone Walls ,Beacon towers