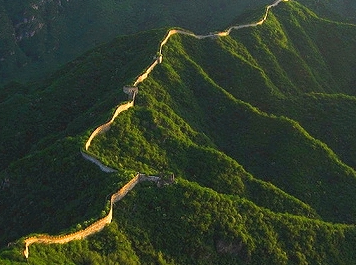 There is a longstanding dispute about how visible the Great Wall is in space. Ripley's Believe It or Not! cartoon from May 1932 makes the claim that the wall is "the mightiest work of man, the only one that would be visible to the human eye from the moon" and Richard Halliburton's 1938 book Second Book of Marvels makes a similar claim. This belief has persisted, assuming urban legend status, sometimes even entering school textbooks. In fact, the Great Wall definitely cannot be seen by the unaided eye from the distance of the moon. Even its visibility from near-earth orbit is questionable. The visible wall theory was shaken once again after China's own astronaut, Yang Liwei, said he couldn't see the historic structure.

A recent photograph taken from the International Space Station appears to confirm that China's Great Wall can be seen with the naked eye after all. Leroy Chiao, a Chinese-American astronaut, took what the state-run China Daily newspaper concludes is the first photographic evidence that the Great Wall could be seen from space with the naked eye, under certain favorable viewing conditions and if one knows exactly where to look.

For more information, please visit the feature at the website of U.S. National Aeronautics and Space Administration: http://www.nasa.gov/vision/space/workinginspace/great_wall.aspxl.

You may be interested in:
What was the material building the Great Wall? How were the messages sent along the wall?