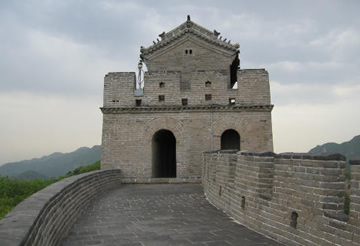 One type was a relatively low platform with walls on the four sides, which were either crenellated or embrasure for the shooting of arrows.

A second type was the watch tower, generally two-storied and built of bricks. The lower floor could be supported by two, four or six arches, with the walls on the four sides embrasure for shooting purposes. The arched rooms provided lodging for the soldiers and were also used for the storage of food and fodder, arms and gunpowder. The upper and lower floors were linked by stairs or by a shaft, in which case the soldiers had to go up and down by a rope ladder. The upper floor had crenels and embrasures for watching and shooting at the enemy, and in some cases had a couple of rooms where the guards could stay or beat the watches with a clapper, light a signal torch or be on the lookout for enemy movements.

The third type was the blockhouse. It could have a square or round shape. It was always built on precipitous terrain and well furnished with arms, ammunition and other supplies for military action.

Historical records show that 1,200 watchtowers and blockhouses were built on the Great Wall between Shanhai Pass and Beijing. Each watchtower was generally garrisoned by 60 officers and men, with half the number guarding the tower and the other half deployed behind the battlements on the wall.

On several platforms were simply structured huts called pu-fang, which provided shelter for the guards during storms. Those at Badaling section (near Beijing) commonly had two stories, with accommodations for more than 10 soldiers on the lower level. There were also drainage ditches on the walls to shield them from damage by excessive rainwater.

There were two types of walls used while building the Great Wall.

Although the wall had no master plan, all the sections of walls were eventually combined. Since they were different walls combined, they were made out of different materials. The two main types were dirt walls and stone walls.

You may interesting in the other kinds of designs for the fortifications on the wall:
Dirt Walls and Stone Walls , Beacon towers , Passes , Walls , Platforms