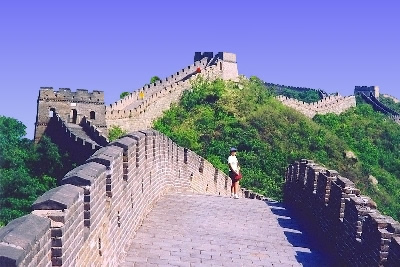 The body of the wall was the key part of the defensive system. It usually stood 21.3 feet (6.5 meters) wide at the base and 19 feet (5.8 meters) at the top, with an average height of 23 to 26 feet (7 to 8 meters), or a bit lower on steep hills. The structure of the wall varied from place to place, depending on the availability of building materials. Walls were made of tamped earth sandwiched between wooden boards, adobe bricks, a brick and stone mixture, rocks, or pilings and planks.

In the western deserts the walls were often simple structures of rammed earth and adobe; many eastern ramparts, such as those near Badaling, were faced with stone and included a number of secondary structures and devices. On the inner side of such walls, placed at small intervals, were arched doors called chuan doors, which were made of bricks or stones. Inside each chuan were stone or brick steps leading to the top of the battlement. On the top, on the side facing the enemy, stood 7-foot- (2-metre-) high crenels called duo-kou. On the upper part of the duo-kou were large openings used to watch and shoot at attackers, and on the lower part were small openings, or loopholes, through which defenders could also shoot. At an interval of every 650 to 980 feet (200 to 300 meters) there was a platform. Platforms were of three types.

You may interesting in the other kinds of designs for the fortifications on the wall:
Platforms,Dirt Walls and Stone Walls ,Beacon towers,passes,Walls