Your Position: Home VOC's Travel BLOGChina travel GuideCaught in a royal romance – Be intoxicated in the Imperial Summer Villa, Chengde

Travel seems like romance, the less you require, the more you will acquire, especially in China. China is a magical place as you never know how much wonderful attractions it will present. What you can do is just to search, to experience and explore. Especially in summer or autumn, you will eagerly need a miracle which helps you escape from the depressed cities and hot weather, and meanwhile surprise you with an amazing tour experience – Let Imperial Summer Villa of Chengde made your day.

Imperial Summer Villa of Chengde is ranked to be one of China’s top royal gardens. 1994, it was included in the world cultural heritage list. Located in Chengde City, Hebei Province of China, it is a popular summer resort for emperors and dignitaries in Qing Dynasty and also the biggest Imperial Garden in the world. It has made perfect combination of the natural sceneries. This attraction was built from 1703 to 1790 during Qing Dynasty (1644-1911). The emperors of Qing Dynasty usually handled daily affairs and spent summer here, making it the second political center of Qing Dynasty.

It was already supper time when we arrived at the hotel after visited the Jinshanling Great Wall in Beijing. Took a short rest, we went to eat the famous Qiaojia Man Minority Eight Dishes. It was really nice cuisine of north China. 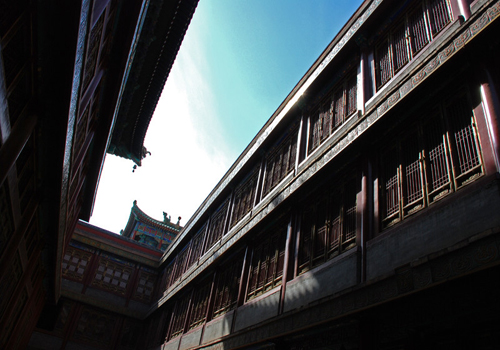 The next day. Since the resort covers an enormous area, and considering the light in the morning, we planned to start from the east line, and went back to the main entrance from the central line, after which took the cable car to the Little Potala Palace.

Waters make the mountain energetic. The fancy changeable lights reflected in the surface of the lakes, the well-proportioned small islands, the luxuriantly green trees and grasses and properly located pavilions, most essences of the Imperial Summer Villa scatter around the Lakes Zone. Although smaller than Kunming Lake of the Summer Palace, it appears circuitous, graceful and enchanting for well distributed architecture, islands and vegetation. 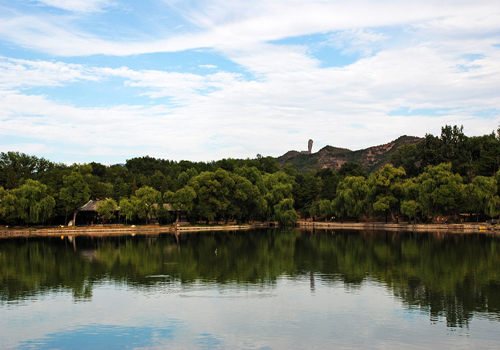 (Bangchui Mountain from the distance)

Lazily strolled in the beautiful sceneries, we were totally lost in the fantastic distributions. Unconsciously, it was midday and we came to the Xiaojin Hill which built nearby the lake, and one half directly touches the water combining garden characteristics of both China’s north and south style. Perfect geographical location and artful construction methods make the resort an independent world. The absolute beauty here drove me intoxicated and absent-minded, and it seemed that I was just a small straw, living there, forgetting myself in the pure and fresh air. 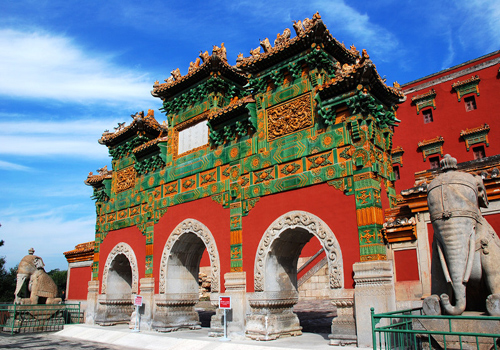 In radiant sunshine, together with the dragonfly in the air and the lotus in the water, we walked untrammelly in this charming royal garden.

You need to take cable cars to visit the mountain area. It’s about 70 minutes and costing 50 RMB. It stops three times and you can get off. We stepped down at the second stop which was the best location for sightseeing of the Little Potala Palace and Xumifushou Temple.

Sunset of that day was particularly grand and amazing. We did not want to go downhill until the sun was totally out of sight. We returned to the downtown and enjoyed another time of Qiaojia Man Minority Eight Dishes. Awesome! 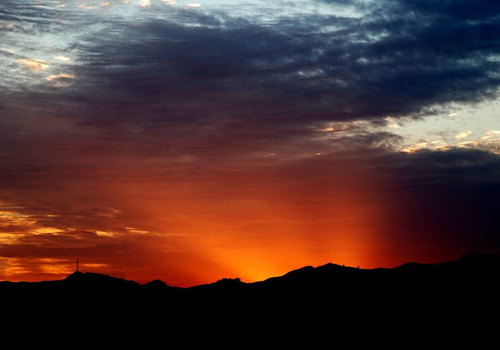 The third day. The Outer Eight Temples is located in the Northeast piedmont of Chengde Imperial Summer Palace. It covers more than 400, 000 square meters. All those temples are splendid and magnificent. We visited the Pule Temple first in which you can worship the Buddha at eight in the morning. Inside the temple there is the tallest wooden Buddha. And then we went to the Xumifushou Temple, and the most famous part of which is its golden top. It’s said to be built out of real gold. We hung around there for a quite long time, feeling Buddhism culture and art.

There are many other attractions that worth visiting. But we had limited time and did not experience the grand Little Putala Palace. However, we had fully tasted Chengde City’s glamour and would remember it forever. 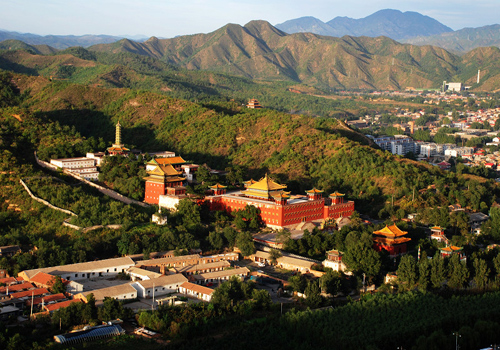 Take a cozy stroll in China’s certain place, pick an unknown destination, it may be a little uneasy, but your knapsack, your camera will record what you feel and see in your memory, no matter they are surprise, romance or fear. I believe travel is dubious romance belongs to my own.