There is a popular saying goes: "there is a paradise above, so are there Hangzhou and Suzhou below". In the 13th century, Marco Polo came to Hangzhou and declared it to be "the finest, most splendid city in the world…where so many pleasures may be found that one fancies oneself to be in the paradise." Hangzhou is a city with beautiful scenery and friendly people, I have been there at last week for my business trip with my clients who came from Canada and USA, thanks for this chance for letting me feel the real paradise on the earth. 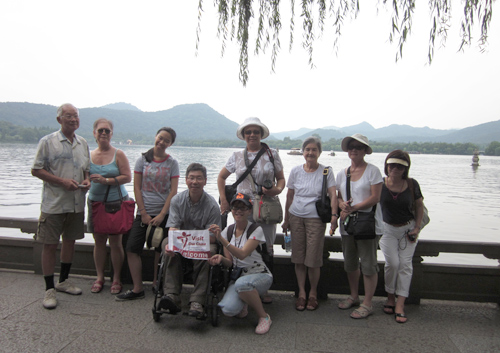 At 8:30AM on August 8th, we drove from Shanghai to Hangzhou, on the way, our local guide Lily told us some information about Hangzhou and let us know the famous tale of Lady White Snake, which is a famous love story happened by the West Lake. This was the very place where the lady and her beloved Xu Xian met, fell in love, separated, and finally got reunited after many hardships and difficulties. Normally, clients will be told about the story in advance, because the night show "Impression West Lake" is performed based on this story. After 2.5 hours' drive, we arrived in Hangzhou and headed to West Lake first. 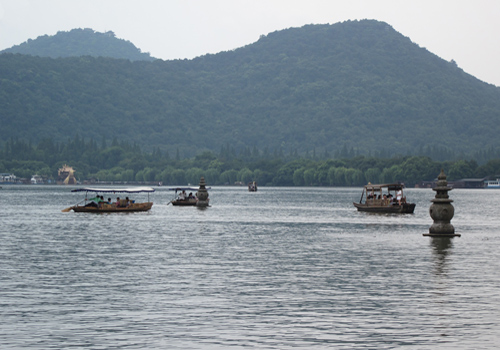 West Lake is the one of most famous highlights in Hangzhou, 15 km in circumference and 4.37 square km in area, with many temples, pavilions, gardens, arched bridges and causeways. The two man-made causeways, Su causeway (Sudi) and Bai causeway (Baidi), divide West Lake into three parts. The causeways are named after Su Dongpo and Bai Juyi, two of the most renowned poets in ancient China, who fell into disfavour in the capital, demoted to here to serve as a governor and organized to build the causeways. And other famous attractions in West Lake area are Broken Bridge (it looks broken in distance when snow covers it in winter, hence the name), autumn moon on the Clam Lake (which is a island for the emperor to watch the sunrise and moonlight.), and the most famous attractions in the west lake area is three pools mirroring the moon. There are three water pagodas about 6-feet-high, with five openings. When full moon shines on the lake at night, there are four moons reflecting on the lake which effects by the three opening of the three floating pagodas. If you have the note of RMB 1 Yuan, you will find that it is the scenery of "the three pools mirroring the moon" on its backside. We had a boat trip to the small island amidst the lake and took many pictures, viewing the lotuses and fed the big golden carps. Among the three islands on the west lake, this is the only one opened to the public. 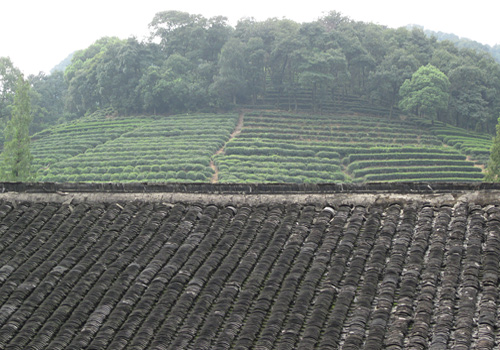 After one hour's leisurely time on the West Lake, we go to the dragon well tea plantation in Meijiawu Village. It took about half an hour to drive from West Lake to this area by bus. Arriving there, mountains covered with green tea trees came into our sight and we could feel that the air is very fresh! Because now it is hot summer time, we could not see the people picking the tea, so we just go to the tea house directly to enjoy the famous dragon well green tea! Of cause we got some high quality dragon well tea after drinking and the price is not cheap.
Because of the bad weather, we did not visit Lingyin Temple after visiting Meijiawu tea village and went back to hotel for rest and waiting the night show "Impression West Lake" directed by Zhang Yimou, who is the chief director of Beijing Olympic Games opening ceremony. It is a must-see show when you are in Hangzhou. 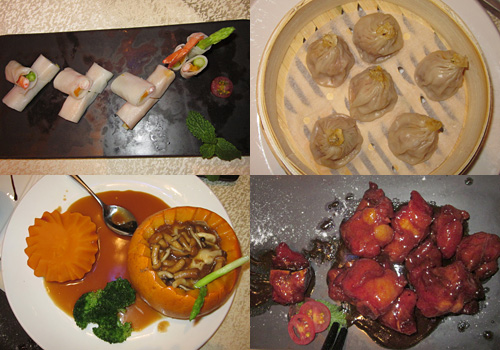 Happy time is always short, my one-day Hangzhou tour finished soon. I remember the famous Chinese poet Su Dongpo had written such a poem: "water shimmering on the shiny day, mountains clothed in the misty rain, West Lake is forever charming like Xizi, whether dressed gaily and plain." West Lake and Hangzhou, I will be back in the future!