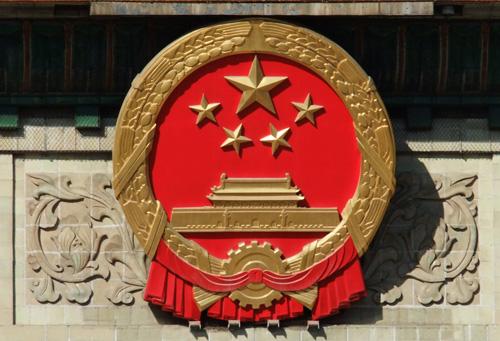 a. National Flag of China
The national flog of China is The Five-starred Red Flag, on the top left corner of which are one big yellow star and four small yellow stars. The four ones center upon the big one, symbolizing all the Chinese ethnic groups uniting as one under the leadership of Chinese Communist Party.
b. National Emblem of China
The national emblem is made up of the five stars on the national flag and the Tian’anmen (signifying the nation), a gear (signifying working class), and ears of rice (signifying the peasantry). The color of yellow and red of the emblem embody a traditional idea of auspiciousness and jubilance.
c. National Anthem of China
March of the Volunteers composed by Nie Er and written by Tian Han in 1935, which has highly encouraged people to fight against the Japanese invaders, was decided as the national anthem.