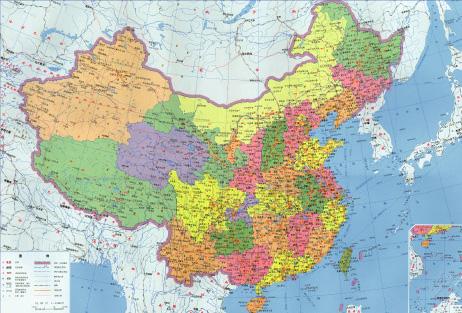 Located in eastern Asia and to the west coast of the Pacific, China spans 5500 kilometers from south to north and 5200 kilometers from east to west, covering latitude of nearly 50 degrees and a longitude of over 60 degrees.
Featuring mountainous areas in the west and plains in the east, China presents a terrain look of rise and fall, with two mother rivers - Yangtze River and Yellow River - running from west to east. Possessing a long land and coast boundary line, China has many neighbors such as Russia, Mongolia, Japan, North Korea, South Korea, Vietnam, Thailand, Laos, Cambodia, Burma, Kazakhstan, Kyrghyzstan, Afghanistan, Pakistan, India, Nepal, Sikkim and Bhutan.
With the easternmost end at Ussuri River, the southernmost at Zengmu Reef, the westernmost end at the Pamirs Plateau and the northernmost end at Mohe, China has a time difference of more than 4 hours across the whole country.