How to identify counterfeit RMB? 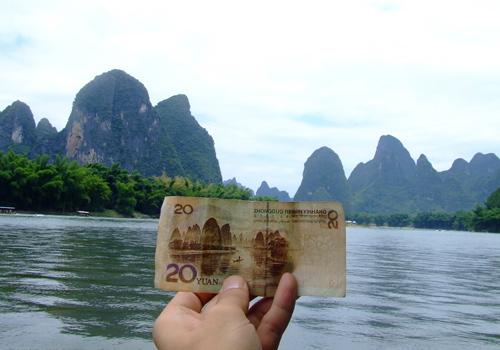 In China, holding or using counterfeit RMB is illegal. Anyone should turn it over to banks or call the police if he/she finds counterfeit RMB. Commonly, people can identify counterfeit RMB by the following ways:
First, hold a RMB bill up against light, it is a genuine note if a clear picture of Chairman Mao’s face can be seen on the left side in the white space. On the fake bills, the outline of his face is usually blurred.
Second, below the white space, there is a red and blue symbol inside a red circle below the serial number. In the real bills, the red and blue boundaries in the symbol are very distinct. They are perfectly aligned, or else they overlap just very slightly. In the fake bills the symbol is usually distorted. This is the easiest identifying mark of these bills.
Third, just next to the red and blue symbol there is a green 100 sign on a bill of 100 Yuan (or “50” on a 50 Yuan and “20” on a 20 Yuan, etc.). When looking flat at this sign, it is green. When the bill is leaned upwards, the sign of the number looks brown from the bottom up. This is a real bill. But if when you tilt the bill upwards the symbol is only dark green, then this is a fake bill. If it is a fake bill, usually the color of the sign will never get brown seen from any angle.
Fourth, rub your finger gently against the collar on the big picture of Chairman Mao. If you can feel texture on his collar, then it is a genuine note; but if it completely smooth, undoubtedly it is fake.
Next, on the top right corner of a RMB, there is a sign of “100”, just overlapping a little below the 100, there is an oval design. If you turn this design up, so you are looking up from the bottom, then place it so that light shines on it, you will see a very faint “100” on the oval. It is just slightly raised, this is a real bill. In the fakes, the 100 is either not there, or is very difficult to see.
Finally, take the bill, the long way up, in your hands and kind of ruffle it in your hands. The sound should be clear and distinct, while the sound of fake ones is muffled. But this is the most difficult to identifying, because many of the bills are very old and worn and that will affect the sound it produces.