In the following conversation with Mr. Wu, we understand: the place of Gaoding is located in the mountains with more people and less land. Since he began to memorize things, the food (rice, corn, sweet potato and taro) produced in the village could be only enough to eat for half a year for the whole village. Back then it was commonly known as "half year food" village. It was the period of the people's commune, and the villagers had to solicit the government if they had no food to eat. No way out, the government managed to collect provisions from the rural areas of neighboring Guizhou Province and let the local villagers took allocated tickets to walk forty miles on mountain road to buy food, and then again carried the food like rice sort of things with bamboo basket back to their mountain village for survival. Now, since the rice policy of planned purchase and marketing by the state was canceled, they can always go to the market to buy rice if their own is not enough. And now the highway leads to the village, so all the villages go to the town’s market to buy rice without carrying it on arms and shoulders. 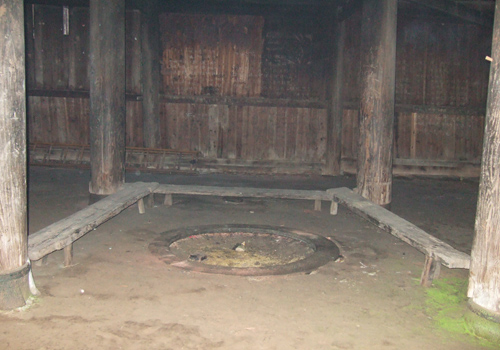 Mr. Wu also recalled the past time when he was young: that was back in the 1960s, Gaoding Village’s surrounding mountains were covered with dense woods, which in addition to the trees of cedar, pine and camphor, many other trees were more than one hundred years. When our country needed railway sleepers, strong laborers from the production teams in the village were organized to go up the mountain to cut down clusters of old pine tree and sold to the government for national railway construction. At the same time, also many centuries-old camphor trees on the mountain were also cut by the villagers to refine camphor oil for big money because of their horrible poverty. He told us that something most unforgettable was he walked every day more than a dozen kilometers on the mountain, meantime shoulder-carried more than 70 kilos of wood to Dudong Village for sale and backtracked home village afterwards. Every day the production team gave those strong laborers 12 work points. Towards the end of year, every 10 points could be exchanged for 3 fen and eight cents. These points had to be scraped up to the end of the year before being divided among villagers as they were also to be deducted from each person’s ration, necessities and the cost of the production team. Then after a year of hard work, every person from the production team got the points worthy of less than 100 yuan, equal to less than ten yuan on average month. On reviewing the experience, Wu didn’t look sad on his face but very quiet, not even a bit evidence of suffering over the past years. Wu also seemed to be very satisfied with the status quo. He said: "Now I a better-off life, my three children get a job outside the village, including two daughters who work for the government, a son doing business in town. My wife and I will also move to the city and live together with my children so that we can enjoy family happiness". 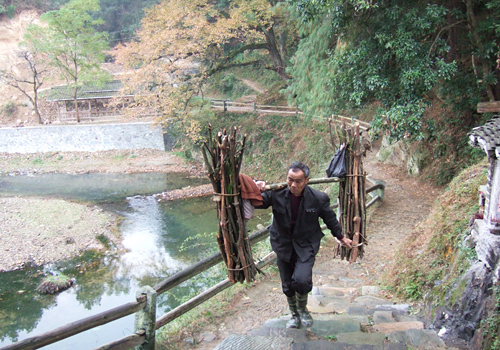 The head of the Gaoding Village is also named Wu. He came to meet curator Zhao at the news of her arrival. I heard after they met that the curator repeatedly mentioned one thing to the village officer: "After many efforts, Gaoding Village has been included in the preparation list of our country to declare as the world cultural heritage. Now in the village a few families after making money from outside part-time job now has switched his old house into mixed brick and cement modern houses. Thus doing will damage the integrity of the ancient building. The village committee must pay great attention to this trend and immediately take effective measures to stop the spreading of this phenomenon. To educate all the villagers, let them realize the protection of the ancient architecture in the village. Once done well, that means protecting their family wealth. Never let go unchecked, otherwise it would be too late to regret." Having been listening to curator Zhao for a long time, director Wu appeared serious expression, meantime kept nodding his head... 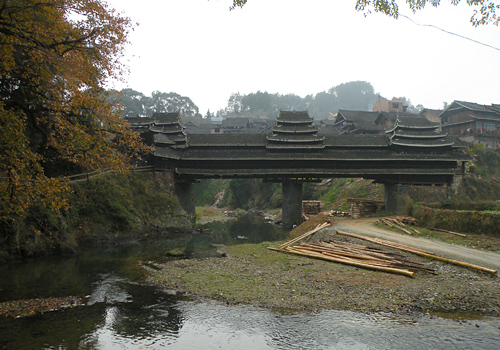 Having left Gaoding Village, we came down the twisting mountain road, and by way of Dudong Village we got to Ba Tuan Village, which is about 5 kilometers away in between. By the side of the village there is a river, on which a beautiful rain and wind bridge was built. We pulled over on the roadside and walked across it. Looking closely at it, we found it is different from other same type of bridges:  it has two high and low bridge verandas, the main one for people to walk across the river, in the main veranda side suspended with another side corridor for livestock to walk across the river. It’s amazing to see the bridge at the age of seventy or eighty years old. The locals are like genius to have designed such an oldest well-known flyover. Across the bridge, we came to a small mountain; its top was closely held around by the river at the foot of the deep river course that shows the steep hills by contrast. We followed curator Zhao to walk on the steps up the mountain and see old trees that tower skyward to form the shade. Atop the mountain, there is a spacious flat ground where three stone sculptures of heroes are seen and worshiped by the Dong people. It’s said that here is the place where the local Dong people hold ceremony every year. 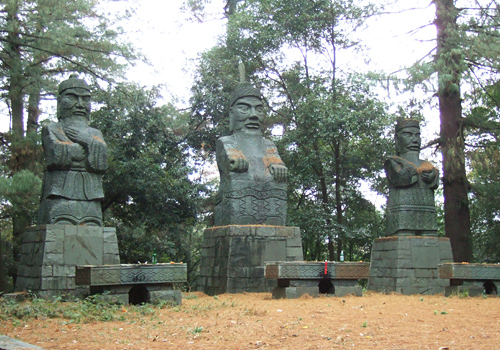