In front of an old and low MuLou door we heard the noise coming out of a house, we stopped and pushed open the half closed wooden door, only to see a couple of older women sitting in a circle inside the pitch dark house; each of them at the age of fifty or above had their heads wrapped in a square white embroidered scarf with concise pattern, there are several other old grannies with their young grandchildren of about one or two years old. They gathered in the room around the fire furnace, talking about sort of rumors communicating with each other in Dong words about all kinds of information. Seeing us strangers standing outside, they sat up to take a quick look in curiosity, and some of them even grined at us with a friendly smile. This similar scene reminded me of the aged at the Senior’s Activity Center of Gao You Village. It’s so good for them to stay together during the slack farming season. Men with men and women with women gather around to have fun by chatting and exchanging idea to further up mutual affections. However, we could hardly see the young ones at the age of mid-twenties. Where and what are those guys working? The deputy director told me that most of the young villagers were out to work for others and didn’t come back to get a reunion with their families until the end of the year, so is true for those who are married and have kids. They also leave their young kids to the elderly and find a job in the city. We were left deep in thought by what he told.

When we came to the big drum tower in the middle of the village, we found that each Dong village almost have the same layout: village center zone has a big drum tower; before drum tower there’s flat land for lusheng dance (lusheng is a reed-pipe wind instrument peculiar to Dong and Miao Minorities); by the side of drum tower has a drama stage. When we crossed the flat part of drum tower before turning to a lane, we suddenly heard the knocking sound of ping ping pong pong from the second floor a family on the roadside. Following the sound out of the window, we saw someone from this family was in the transformation to decorate their own kitchen. We found that the whole building’s MuLou pattern has not changed. The host just paved the floor with large milky-white ceramic tiles and the top of kitchen range with clear bright ceramic tiles as well as installed the stainless basin and water tap. Standing on the side, the deputy director of the village told me, the son of the family did part-time job outside and had earned some money, and was now decorating the kitchen based on the style of the city. It was estimated that it had to be completed before Chinese New Year. 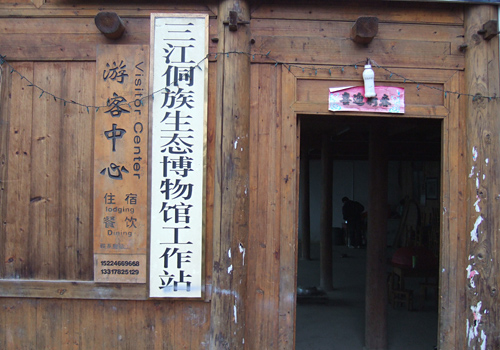 After leaving Gao Xiu Village, we drove another two and a half hours before we came to the Gao Ding Village which is 45 kilometers away from Sanjiang County. When we got there it was already at dusk. Fortunately, curator Zhao had done the arrangement, so we were put up in the workstation that belongs to the museum, which is just located at the village entrance. The station is also built into the Dong wood Ganlan style with a total of three floors. A young man and a young woman met us up with enthusiasm when we entered the station. Through Zhao’s introduction, we knew the boy was called Lin, an undergraduate from a university in Guangdong and had been working as intern for four or five months in the workstation while the girl called Zhong was a Beijing university sociology graduate student. She just got to the workstation as a volunteer for more than ten days. Lin looked very sunny, full of vitality and very friendly, and good at communicating with people. He told us that his daily work at the station was to walk around the nearby Dong villages to collect, verify and systemize written materials of cultural relics. Although his work in this place was trivial and full of toil. To reach the goal, sometimes he had to tramp over mountains and dales for more than several hours. Compared to his hometown life, the one he had here was a lot more arduous. But he put this work as his rare life experience and wealth. He also put his experience of working here to share in the net with his peers. Zhong, having known about the situation on the web, she was attracted to here as a volunteer.

On that night, we had an early sleep at workstation. Early in the following morning, after breakfast, we followed Lin and Zhong into Gaoding Village for investigation. On the side of the road not far from the station, we saw an old camphor tree of more than 300 years, still full of luxuriant foliage, with a size of its trunk as big as five adult’s arms wrapped around it. Lin told us to walk past the old camphor tree along the avenue and then up the hill. It would take one and a half hours to hike up to a place called Da Tang Ao High Mountain Lake, where the field of vision is open, and seen from a distance, the water and the sky merge in one color. 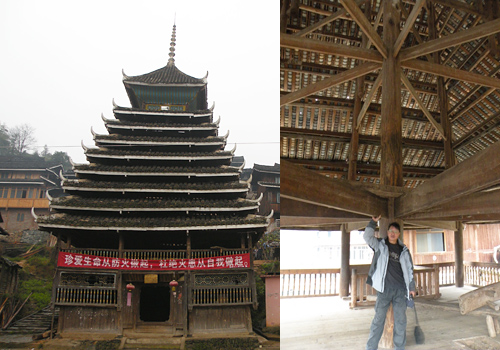 We followed the slate-paved road all the way down to the center of the village. The village is quite large and has hundreds of wood-structured Ganlan buildings up on the mountain terraces from low to high, distributing in U-shape which looks so splendid. In the village, there are seven drum towers of different varieties located in different parts, well-proportioned and very unique. Under the careful observation, we found that each and every single drum tower is not identical from the outside to the inside in terms of design. Some are small and delicate, some are tall and straight. The most unusual one among them is known as "sole pillar" drum tower because the entire drum tower center uses a single giant fir as a pillar support, it has 9 tiers and its structure design is amazingly exquisite.