In China, "flavor" is considered the soul of the cuisines. Each seasoning master can transform diverse raw and processed materials, seasonings, and cooking ways into a very different yummy flavor, salty, sweet, hot, sour, fresh, and kinds of combined flavors…. Among the traditional five flavors (sweet, sour, bitter, pungent and salty), sour is the kind which can both promote digestion and enhance appetite. However, another flavor, hot, which also enhances people’s appetite and often appeared with sour in Chinese menus, is the flavor loved by many people and adheres specifically to Sichuan Cuisine, the best known cuisine of the eight famous Chinese cuisines.

Strictly speaking, hot, or peppery taste is not a taste sense, but an anxious sense in the mouth. In Chinese five flavors, the hot refers all pungent tastes. At the end of 15th century, Columbus brought peppers back to Europe from America by ship; 100 years later, this new plant which sends out strange smell finally traveled to China. Pepper, which is native to America, ginger from Southeast Asia and Chinese pepper (花椒) are the three frequently-used biting taste in Chinese restaurants. The hot taste comes from capsaicine, which can stimulates human cells, produces a slight cauterant-like sense in the brain, stays on the tongue, soon after, the appetite is aroused.
In Sichuan, peppers are the favorite no matter used as major ingredient, auxiliary material or condiment. It is a big brand of Sichaun cuisine. With moist climate, overcast and rainy, the people lived in Sichuan Basin just need the violent and hotness of pepper. In Sichuan families, many a housewife is more mighty; they are open, tough and decisive, people use hot (泼辣) to describe them. 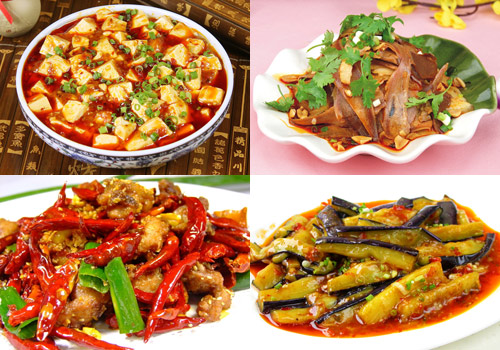 Leshan city, which located in Sichuan Basin, is inhabited by the most leisurely and comfortable people in China, who have a particularly pursuit for the flavor and known the pepper best. Soaked sour pepper (泡椒) is one of the creative methods that Sichuan people utilize pepper. Compared with fresh pepper, soaked peppers are amiable and gentle, not that aggressive after magical chemical reactions in the jars. They are the key of a famous flavor, fish-scented (鱼香), with shredded pork with garlic sauce, or "fish-resembling" meat (鱼香肉丝) being the representative dish.
Another gorgeous creation of pepper taste in Sichuan is a kind of chilli sauce involved in a high-yield leguminous plant. Sichuan people called this sauce Dou Ban (豆瓣). Mix marinated lima bean with chopped fresh red peppers, season it with other condiments quickly, scoop them up into clayed jars, and then leave it for natural fermentation under the sun. The mouthwatering chilli sauce is done. Sichuan chilli sauce is temperate pungent with strong fragrance; it is the reliant seasoning for Sichuan cuisine. The stewed tofu with minced pork in pepper sauce (麻婆豆腐) is the typical use of Dou Ban. The light flavor of tofu strongly contrasts with the strong flavor of Chilli sauce, which can mostly motivate all sense organs. The boiling hot but tender sensation is just the consummate skill making Sichuan cuisine a great winner in China and even in the world. 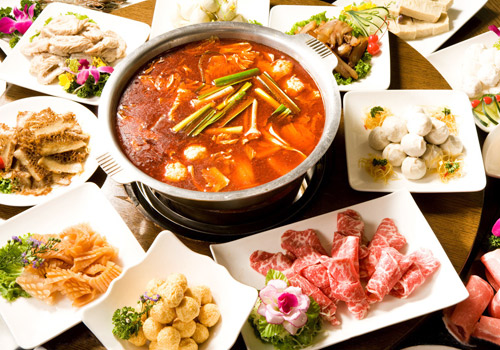 If soaked pepper and Dou Ban are the creative use of pepper in Sichuan cuisine, then the most charming flavor makes Sichuan cuisine fashionable in the country must be the captivating spicy flavor and Chongqing hot pot. This flavor contributes to Chinese pepper, a pepper native to China and is the traditional and most distinguishing taste in Sichuan dishes. Rattan pepper fish (藤椒鱼) is the classical dish of this kind. The best example for the combination of America pepper and Chinese pepper should be the spicy hot pot, the leading role of which is the bright dried red pepper. Cut dried pepper into sections, fry them with other condiments to make salivating soup base of the hot pot. In Chongqing, each hot pot restaurant has its own secret formula to make soup base; while in the same hot pot, each Chongqing people can adjust the flavor in line with his own taste. In fact, the personalities of Chongqing people is just like their loved hot pot, forthright, sincere and tough, in Chinese, it calls La (泼辣, hot).
From the adoption of raw material to the cooking skills, the spicy hot pot gives birth to perfect combinations between meat and vegetables, raw food and cooked food, spicy and fresh, light flavor and heavy taste. This is just nothing else than Chinese’s comprehension to the well-distribution of the five flavors.
---By April (VisitOurChina)
Tags: Sichuan cuisine hot pepper Leshan Chongqing hot pot

If I travel to Chongqing, I will try hot pot. It looks so captivating!