It is often said that Chinese people form their eating habits in accordance to the geological factors, which is not only a wisdom of adapting themselves to the local conditions, but also a way of survival for Chinese complying with Nature. Chinese people meticulously make full use of the land under their feet and intelligently acquire food, whether from alluvial plain, rivers and lakes, or from untraversed plateau, cities of skyscrapers. Where there is green, there is harmony between human beings and Nature.

Traditionally, rice falls into two kinds, glutinous rice and non-glutinous one. Those that are sticky are rich in amylopectin. Congjiang County of Guizhou Province, a mountainous region where the Zhuang nationality, Dong nationality and Miao nationality inhabit, regards glutinous rice as staple food since the ancient times. Here, almost a hundred sorts of glutinous rice are grown in the terrace on the high mountains，while scattered stockaded villages look like islets tucked in the depth.
Three hundred plus kilometers away from the capital of Guiyang, Guizhou Province, there is an endearing village called Xiayao Village. When it comes to October, glutinous rice is ripening. The village, where the Zhuang nationality inhabits, is preparing itself for the impending Xinmi Festival, a day set up to celebrate rice harvest. The twigs and branches just picked scent the air, and these ordinary-looking leaves will play a magic role on that day. They are of maple trees on the mountains nearby. In the face of the infinite Nature, the locals are always adept at taking advantage of the gifts of it. When leaves are boiled for a while, yellowish green solution is seen and becomes the natural colouring agent for glutinous rice. The soaked glutinous rice, after being boiled, often taking on black colour, is now dyed yellow. Such finished rice contains plentiful oil and keeps people from hunger. As a matter of fact, it has been traditional wit for Chinese people to colour food by plant. On the one hand, it gratifies the longing for hues of an isolated nationality leading a hard life; on the other hand, it can protect the best-quality of the food. When the staple for Xinmi Festival is well prepared, the Zhuang nationality begins to make the entrée, namely kipper. Due to moist climate of the Congjiang County, locals tend to salt the fish so as to prevent putrefying bacterial growth. Now that they believe piquancy can help them get rid of moisture inside of you, they cannot make their unique sour fish soup (酸鱼汤) without litsea and rhizoma kaempferiae. As the great moment comes, villagers get seated in a long line and sip their home-made wine, called Wei Jiu, which is also made from the local glutinous rice. So this grand banquet gets a realistic name – Long Street Banquet. Nowadays, this banquet tells people what cooperation and share really are and gain much attention from the outside world as intangible cultural heritage. 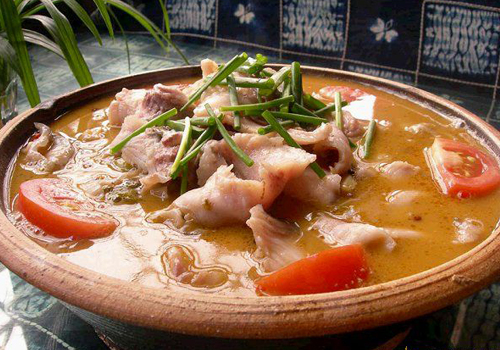 Not far from the Xiayao Village is Jiache Village, where most of the Miao nationality lives. Villagers aged more than fifty are called Nuo Wa, literally meaning children of glutinous rice, in that they were raised by glutinous rice. In the 1960s, high-yield nonglutinous rice was popularized by the government in order for rice production increase, and the younger generation indeed fed on this kind of rice; however, in spite of the fact, Nuo Wa still believes only glutinous rice can help build beefy muscles. Because it is inappropriate to reap mechanically on terraces on the mountains, locals have to do the work by traditional sickles. Compared with rice plant in flat areas, planting in precipitous and barren mountains needs more wisdom and courage. In the ancient times, glutinous rice used to be the main staple of Kingdom of Wuyue along Yangtze River basin; in the Qin Dynasty (221-206 B.C) and Han Dynasty (207 B.C-25), with the expansion of north ethnic group to the south, glutinous rice was introduced. In effect, people have gained more than that. Other secrets are still in the water.
A thousand years ago, Chinese ancestors had found that in the water there were ducks and carps. They can eliminate pests in the rice and their excrement can provide adequate nutrients for the rice. As yet, almost all paddies here are never polluted by pesticide or chemical fertilizer. Though glutinous rice possesses top quality, the yield only accounts for half of the rice, and it covers less than 5% of the total planting area. Confronted with the present conditions, people in the mountains still sow the seed like their ancestors and live hand in hand with glutinous rice. 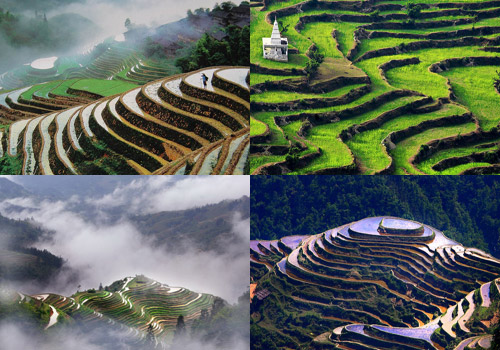 Different regions prompt Chinese people to skillfully gain prime dainties from Nature. Even living in the barren mountainous region, clever people can create delicacies, which is all attributed to their wisdom in the face of high mountains and their reverence for the vast land under their feet.
---Gaea (VisitOurChina)
Tags: mountain glutinous rice terrace Guizhou

I love this article and the picture! China is amazing!