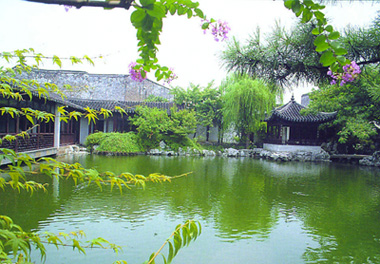 Transfer via: by air-own arrangement  Program: Arrive in Shanghai, be met and transferred to hotel, then visit Yu Garden, the Bund (Waitan), Nanjing Road

-Yu Garden: It's reputed to be the most beautiful garden south of the Yangtze River. Built beside the Temple of the City God and covering only fives acres, it follows the Suzhou garden design of a world in microcosm. -The Bund (Waitan): It is one of the most recognizable architectural symbols of Shanghai. It is here where the first British company opened an office in 1846. -Nanjing Road: It is one of the most important commercial and tourist streets in Shanghai, which stretches from Waitan to Yanan Xilu.

-Shanghai Museum: The biggest museum in China, with a collection of over 120,000 pieces of Chinese art & cultural relics. It is especially famous for its treasures of bronzes, ceramics, paintings and calligraphy. -The Shanghai World Financial Center is a superhigh skyscraper in Shanghai, China. It is a mixed use skyscraper which consists of offices, hotels, conference rooms, observation decks, and shopping malls on the ground floors.

Transfer via: by private vehicle  Program: Our guide and driver will escort you from Shanghai to Suzhou, Arrive in Suzhou, be met and transferred to hotel, then visit the Humble Ministrator's Garden, Lion Grove, Tongli

-Humble Ministrator's Garden: The garden is the best representative of Chinese classical gardens, constructed in the Ming dynasty. Focused on a central pond with pavilions, terraces, chambers, and towers located nearby, the garden is divided into three parts: the eastern, middle and western parts. -Lion Grove: The Lion Grove is one of the four noted gardens in Suzhou. It was first built in 1342 in the Yuan Dynasty (1279-1368).This small garden is truly exquisite in design, the rocking imaginative. Entering the garden the tourist will find stones in various interesting shapes. -Tongli: Tongli town has a history of more than one thousand years. There are over hundreds of gardens established in Ming dynasty and Qing dynasty, temples, cartilages and former residence of eminent souls. Fifteen rivers divide the town into seven island and 49 sets of historic bridges connect the town as a whole.

Transfer via: by private vehicle  Program: Our guide and driver will escort you from Suzhou to Hangzhou, then visit Wu Town, Arrive in Hangzhou, be met and transferred to hotel

-West Lake: Lying on the west edge of Hangzhou city, West Lake is the symbol of Hangzhou as well as one of the most beautiful sights in China. -Six Harmonies Pagoda: It is a perfect symbol of brick-and-wood structure built in the ancient China. It was first built in 970 AD in the Northern Song Dynasty (960-1127). The name "six harmonies" comes from the six Buddhist ordinances, meaning "harmonies of the heaven, earth, east, west, south and north".

Transfer via: by air (arranged by us)  Program: Visit Tea Musuem and Meijiawu Tea plantation, airport transfer (Hangzhou), Arrive in Guilin, be met and transferred to hotel

-Li River Cruise: Depart from your hotel in the morning. Be transferred to the Zhujiang Pier (about 1 hour drive) for a 4.5 hours wonderful cruise. You will enjoy the picturesque mountains, peaceful green fields, farms and villages with water buffalos, cows wondering around on both sides of the river bank. Disembark at the one-thousand-year-old town Yangshuo in the afternoon. -West Street: West Street is the oldest street in Yangshuo with a history of more than 1,400 years. Situated at the center of Yangshuo County, West Street has become, since the 1980's, a window of eastern and western culture and the biggest 'foreign language center' in China.

Transfer via: by air (arranged by us)  Program: Visit Elephant Trunk Hill, Reed Flute Cave, Be transferred to airport (Guilin), Arrive in Xi'an, be met and transferred to hotel, free at the rest of the day

-Elephant Trunk Hill: Located at the conjunction of the Li River & the Peach Blossom River, the whole hill looks very much like a giant elephant with a long trunk, it is the symbol of Guilin city. -Reed Flute Cave: Known as "the Palace of Natural Arts" where you can see beautiful stalactites & stalagmites, learn how they are formed.

Transfer via: by train for soft seat (arranged by us)  Program: Visit the Ancient City Wall, the Great Mosque of Xi'an, train transfer (Xi'an), Arrive in Luoyang, be met and transferred to hotel

-Longmen Grottoes: More than 100,000 images and statues of Buddha and his disciples were carved into the cliff walls on the banks of the Yi River, 16km south of the city in 494 AD. -Shaolin Temple: The cradle of Chinese Kong Fu.

Program: Full day tour for the Forbidden City, the Temple of Heaven, the Tian'anmen Square

-The Forbidden City: The largest imperial palace in China during the Ming and Qing dynasties with a history of around 600 years. -The Temple of Heaven: The place where the ancient emperors used to pray for the God's bless of the whole nation. -The Tian'anmen Square: The largest city square in the world.

-Badaling Great Wall: One of the eight wonders in the world and the symbol of China. -The Chang Ling Tomb: Chang ling it's the biggest one first one best preserved one of the thirteen tombs of the emperors in the Ming Dynasty.

-Hutongs: The old narrow paths where common people lived. All the Hutongs crisscross with each other, dotted with the Kindergarten, the Bell Tower, the Drum Tower, the Tea House, and the lake, House of Gong Infante and local people's houses among them. -The Summer Palace: The largest and best-preserved royal garden in China with a history of over 800 years. -Lama Monastery: the largest 260-year-old monastery in Beijing of the Yellow sect of Lamaism.

Transfer via: by air (arranged by us)  Program: Hotel to airport transfer (Beijing), when you arrival Shanghai, you will go to RAMADA Pudong airport hotel on your own

Program: You will check out the hotel and go to the airport on your own