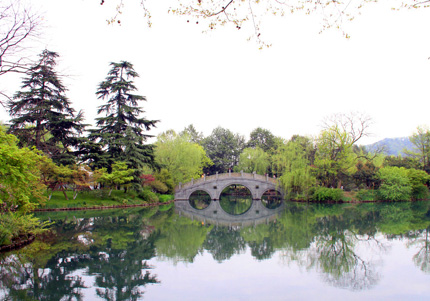 Program: Full day tour for the Tian'anmen Square, the Forbidden City, the Temple of Heaven. Take a visit to Cloisonne Factory to buy some souvenirs if you are interested. In the evening, enjoy the Liyuan Beijing Opera at Liyuan Theatre

Program: Full day visit the Badaling Great Wall, The Ding Tomb, The Sacred Road, On the way back to hotel, you will be driven to visit the main 2008 Beijing Olympic venues, take an exterior visit of both the Beijing National Stadium (Bird's Nest/Olympic Stadium), National Swimming Centre ('The Water Cube'), Beijing, feel free to take some photos of the stadiums. In the evening, enjoy the delicious Beijing Roast Duck

Program: Full day tour for Hutongs by rickshaw, Summer Palace (you will enjoy the Royal River Cruise on Kunming Lake), Beijing Zoo. In the evening, enjoy the Kungfu Show at Red Theatre

-Hutongs: The old narrow paths where common people lived. All the Hutongs crisscross with each other, dotted with the Kindergarten, the Bell Tower, the Drum Tower, the Tea House, and the lake, House of Gong Infante and local people's houses among them.
-The Summer Palace: The largest and best-preserved royal garden in China with a history of over 800 years.
-Beijing Zoo: Situated in the Xicheng District, Beijing Zoo was the first of its kind to be opened in China. The zoo contains a diverse collection of animals, a number of exhibition halls and some sites of historical interest.

-Beihai Park: The Beihai Park in the center of Beijing has an area of more than 70 hectares with a water surface of 39 hectares. To its north is Shishahai Lake and to its east is Jingshan Park. The Palace Museum is to its southeast, a short distance.
-Xiushui Street: A market near the embassy area where you can find a number of duplicates of clothing in traditional Chinese style such as clothes, caps, gloves. Enjoy bargains with sellers and pleasant surprise of finding a real treasure if you are lucky enough.
-Lhama Monastery: the largest 260-year-old monastery in Beijing of the Yellow sect of Lamaism.

Transfer via: by air FM9281 1050-1240 (arranged by us)   Program: In the morning, you will be transferred to airport for Xi'an. Arrive in Xi'an, you will be met and transferred to hotel, visit the Great Mosque of Xi'an, The Ancient City Wall, History Museum in Xi'an

-The Great Mosque of Xi'an: It is the largest and best preserved of the early mosques of China. Built primarily in the Ming Dynasty when Chinese architectural elements were synthesized into mosque architecture.
-The Ancient City Wall: It is the largest and best preserved present city wall in ancient China and is probably the best military battlement in the world.
-History Museum in Xi'an: It is a magnificent architectural complex in the Tang Dynasty style. The Museum possesses a treasure of 113,000 historic and cultural artifacts unearthed in Shaanxi, and it covers an area of 1,100 square meters for exhibition.

-The Terra-cotta Warriors and Horses: The greatest archaeological findings of the century: the army of terra-cotta warriors and the bronze chariots entombed in vast underground vaults at emperor Qin's tomb.
-Big Wild Goose Pagoda: It is a well-preserved ancient building and a holy place for Buddhists.
-The Bell Tower: The wooden tower, which is the largest and best-preserved of its kind in China, is 36 meters (118 feet) high.
-The Tang Dynasty Dinner Show: This is a very spectacular and elaborate show with dancing, traditional Chinese music and probably the most beautiful Chinese girls in town. A must-see.

Transfer via: by air MU2329 0755-0930 (arranged by us)  Program: In the morning, you will be transferred to airport for Guilin.  Arrive in Guilin, you will be met and transferred to hotel, then visit the Reed Flute Cave, Elephant Trunk Hill, also take a visit to Calligraphy & painting shop (Guangxi Normal University Art shop) which is located in the Jingjiang Palace

-Reed Flute Cave: Known as "the Palace of Natural Arts" where you can see beautiful stalactites & stalagmites, learn how they are formed.
-Elephant Trunk Hill: Located at the conjunction of the Li River & the Peach  Blossom River, the whole hill looks very much like a giant elephant with a long trunk, it is the symbol of Guilin city.

Program: Li River Cruise, West Street, the Moon Hill by car or bike depending on your choice, Big Banyan, in the evening, enjoy the fantastic Impression of Sister Liu at the Outdoor Li River Mountain-Water Theatre. After the tour, be transferred back to Guilin

-Li River Cruise: Depart from your hotel in the morning. Be transferred to the Zhujiang Pier (about 1 hour drive) for a 4.5 hours wonderful cruise. You will enjoy the picturesque mountains, peaceful green fields, farms and villages with water buffalos, cows wondering around on both sides of the river bank. Disembark at the one-thousand-year-old town Yangshuo in the afternoon. Have a short exploration to the old town before to be transferred back to Guilin city.
-West Street: West Street is the oldest street in Yangshuo with a history of more than 1,400 years. Situated at the center of Yangshuo County, West Street has become, since the 1980's, a window of eastern and western culture and the biggest 'foreign language center' in China.
-The Moon Hill: 50 minutes' bike from Yangshuo, there lies the Moon Hill. Named for the crescent shaped cave running through the moon, Moon Hill is one of the highlights in Yangshuo.
-Big Banyan: 6 kilometers away from the County of Yangshuo, you will find a prominent and towering tree: the Big Banyan Tree. It has survived wind and rain over centuries since it was planted during the Sui Dynasty (581-618).
-Impression of Sister Liu: The performance was premiered on March 20th, 2004 at the Sanjie Liu Sing Fair, one mile from West Street (Xi Jie). This is the world largest natural theater which utilizes the waters of the Li River as its stage, with twelve mist shrouded hills and the heavens as its backdrop.

-West Lake: Lying on the west edge of Hangzhou city, West Lake is the symbol of Hangzhou as well as one of the most beautiful sights in China.
-Six Harmonies Pagoda: It is a perfect symbol of brick-and-wood structure built in the ancient China. It was first built in 970 AD in the Northern Song Dynasty (960-1127). The name "six harmonies" comes from the six Buddhist ordinances, meaning "harmonies of the heaven, earth, east, west, south and north".

Transfer via: Private Vehicle Program: In the morning, drive to Wuzhen, visit the famous water town-Wuzhen, and also take the local boat to cruise on the rivers. After the tour, drive back to Hangzhou, visit Lingyin Temple, Dragon Well Tea Plantation, and then drive to Suzhou directly. Arrive in Suzhou, be met and transferred to hotel

-Humble Ministrator's Garden: The garden is the best representative of Chinese classical gardens, constructed in the Ming dynasty. Focused on a central pond with pavilions, terraces, chambers, and towers located nearby, the garden is divided into three parts: the eastern, middle and western parts.
-Tiger Hill: One of the most famous sights of Suzhou, entitled as "the most famous place in Wuzhong", also named "Surging Sea Hill", "Surging Sea Peak".
-Lingering Garden: Shouzhou is famous for its Gardens. Lingering Garden is an elaborate succession of small gardens. Lingering in the garden you would marvel at this unique architecture art.
-Pan Gate: Pan Gate is an ancient city gate with land and water entrances. One gate with land and water entrances was quite typical in ancient China. Pan Gate is the only one left.
-The No.1 Silk Factory: Suzhou is also famous for its silk production. In the factory you can see how the silk is processed from the silk worm to the final woven cloth.

Transfer via: Private Vehicle Program: In the morning, take the Grand Canal cruise by boat, after the tour, drive to Shanghai directly. Arrive in Shanghai, be met and transferred to hotel, The Bund (Waitan), Nanjing Road, Shanghai Old Street. In the evening, enjoy the Acrobatic Show at Shanghai Centre Theatre (Shanghai Shangcheng Juyuan)

-Yu Garden: It's reputed to be the most beautiful garden south of the Yangtze River. Built beside the Temple of the City God and covering only fives acres, it follows the Suzhou garden design of a world in microcosm.
-Jade Buddha Temple: The Jade Buddha Temple is one of the few temples in downtown Shanghai. If you're lucky, you can watch the monks serving a ceremony in a side room.
-Oriental Pearl TV Tower: the highest TV Tower in Asia. With 468 meter high it stands in Pudong Park in the new and developing Lujiazui district on the banks of the Huangpu River.
-Shanghai Museum: The biggest museum in China, with a collection of over 120,000 pieces of Chinese art & cultural relics. It is especially famous for its treasures of bronzes, ceramics, paintings and calligraphy.
-Huangpu River: take a glimpse at the old Shanghai & new Shanghai. Enjoy a sight of rows of magnificent buildings on the banks and ships of different sizes briskly plying the Huangpu River.

Program: Visit Zhujiajiao, at right time, enjoy the total eclipse, it will be amazing experience. Then be transferred back to Shanghai

-Zhujiajiao: is a typical ancient water town in the south of the Yangtze River. There you can see the well-preserved Ming and Qing architecture, ancient stone bridges, ancient streets, etc.

Transfer via: by air FM845 at 12:35 p.m.  Departure from Shanghai-own arrangement  Program: Free at leisure, and then you will be transferred to airport for your flight to Hong Kong