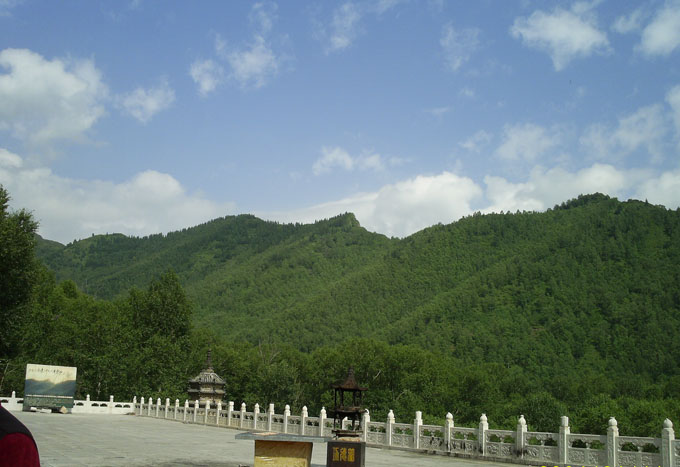 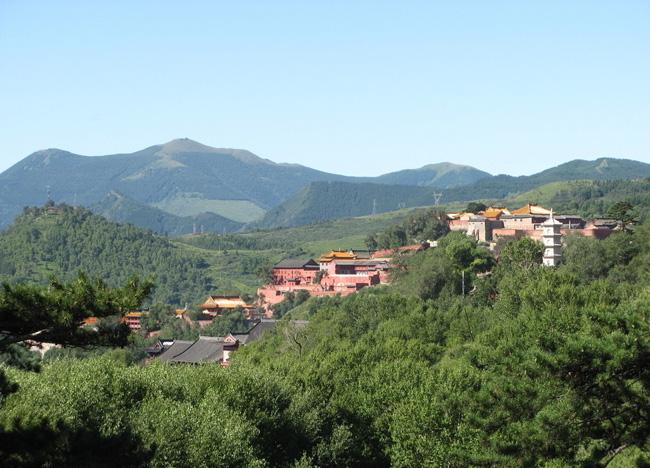 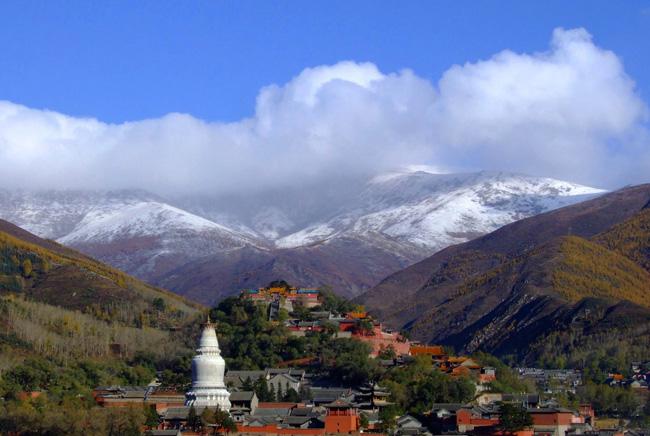 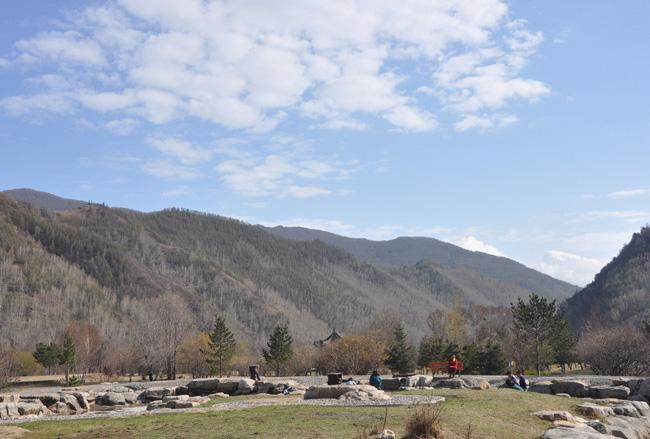 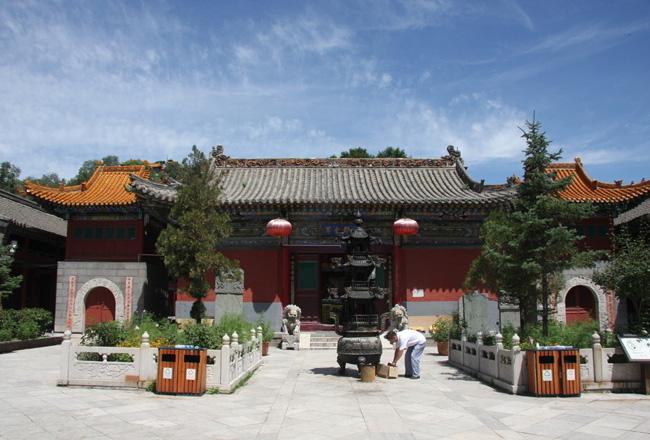 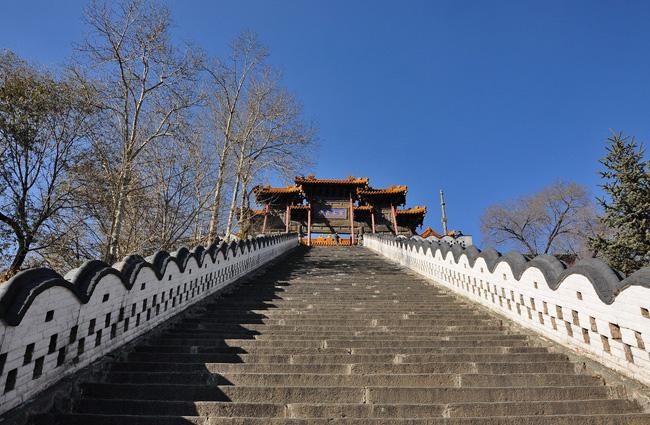 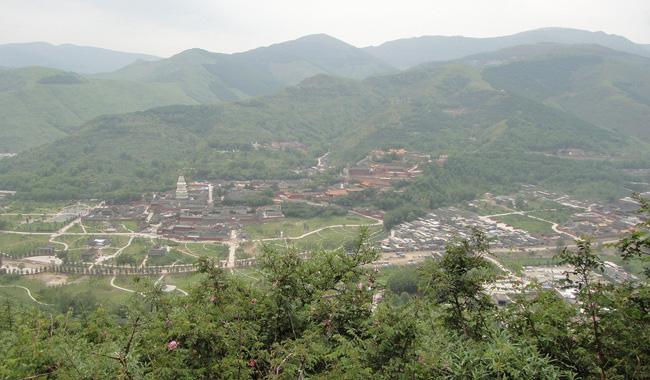 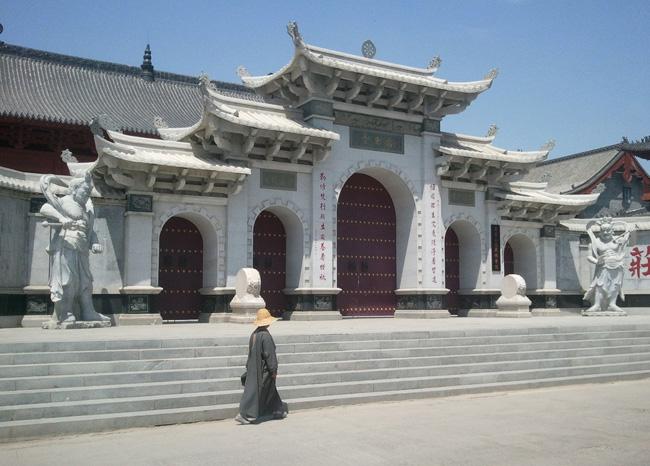 Chinese name: 五台山 (Wu Tai Shan).
Location: Wutai County, Xinzhou City, Shanxi Province.
Open time: 06:30-18:30.
Tickets: CNY168 for entering Mt. Wutai; free or CNY4-10 for visiting the temples in the mountain.
How to get there: There are about 9 buses leaving from Taiyuan (provincial capital of Shanxi Province) for Mt. Wutai every day, but the schedule usually declines to one to two in winter. Please check it before departure.
Best time for visit: June-August.
Wutai Mountain Travel tips:
1. With an altitude of 3061.1 meters, climatic characteristics of Mt. Wutai is similar to Greater Khingan Mountains in Northeast China where the temperature is 10℃-20℃ during the day and 8℃ to 10℃ at night from April to October.
2. Summer travel: It rains quite frequently in Mt. Wutai in summer, so humidity is high on the mountain and it could be quite cool in the morning and at night. Therefore, it is suggested to take along rain gear and thick clothes, which are necessary when watching sunrise.
3. Winter travel: Paths of the high-altitude area of the mountain might be blocked by snow in winter, so it would be better to go upward from south or west route. Many of the hotels will close in winter, thus, it is advised to book hotel with heating system in advance.
4. Many Buddhist ceremonies are held during August to October.

About 230 kilometers away from Taiyuan, Mt. Wutai is located at the northeast part of Shanxi. The mountain is the most famous Buddhism Mountain among the "Four Buddhism Mountains of China" (Mt. Wutai, Mt. Emei, Mt. Jiuhua, and Mt. Putuo), one of the "Five Buddhist Sacred Place in the W   orld" (Mt. Wutai in China, Lumbinī in Nepal, and Sārnāth, Bodh Gaya, Kusinagar in India) and the top among the "Ten Summer Resort Mountains of China". Besides the amazing mountain landscapes, visitors can also take a visit to the temples on Mt. Wutai and learn about Buddhism culture in China.

Mt. Wutai is one of the oldest lands that rose above the sea about 2.6 billion years ago. With the lowest altitude at 624 meters and the highest altitude at 3061.1 meters, Mt. Wutai covers an area of 592.88 square kilometers. It gained its name Wutai (literally "five platforms") from its five peaks with flat tops (the eastern Wanghai Peak, the western Guayue Peak, the southern Jingxiu Peak, the northern Yedou Peak and the middle Cuiyan Peak), and gained its another name Qingliang Mountain (Cool Mountain) from its annual average temperature at -4℃ and high-moisture air. After a long time of geological evolution, the main content of Mt. Wutai is crystalline rock, however, valuable obsidian also can be found, and the main vegetation is grass and bushes. According to geologist, Mt. Wutai has a whole geological structure and extinct plants and animal fossils since the Neoarehean. 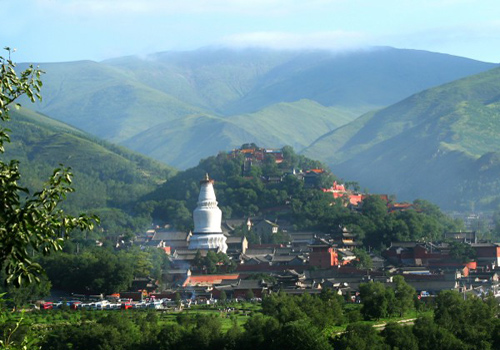 It is said that Mt. Wutai was called Zifu Mountain, which was once the sacred place of Taoism at first with the Taoist Zifu Temple  on it. In East Han Dynasty (25-220, the period commonly seen as the age of Buddhism's importing to China), two Buddhist masters (Kasyapamatanga and Dharmaratna) came to Mt. Wutai with ambassadors sent to India by Emperor Hanmingdi (the second emperor of the Eastern Han Dynasty ruling during 28-75) and got the right to build Buddhist temple on the mountain by winning in the competition of preaching with the Taoist priests of Zifu Temple.

The second boost of Buddhism on Mt. Wutai happened in Tang Dynasty (618-907) with more than three hundred temples and three thousand monks making Mt. Wutai a sacred place of Buddhism. With the increasing boom of Tang, China became the economic and cultural center of Asia and many monks from India, Japan, Korea, Sri Lanka and some other countries pilgrimaged to Wutai Mountain to learn Buddhist scriptures. 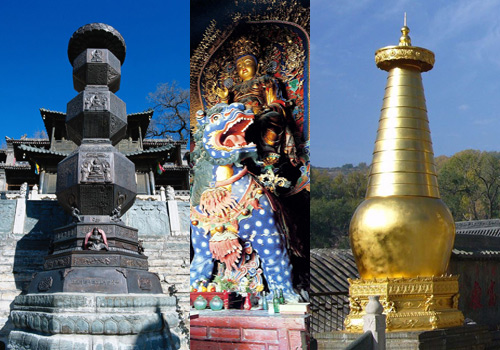 Landscapes and Temples on Mt. Wutai

With an altitude of 2795 meters, Wanghai Peak on the east gains its name for the amazing sea of clouds that can be seen on the peak. Guayue Peak is 2773 meters high on the west, which is a good place to watch the moon. With a round flat top, the Jinxiu Peak on the south is 2485 meters high with many little wild flowers scattering. Among the five peaks, the Yedou Peak on the North is highest with altitude of 3061 meters and is hailed as the Roof of North China. The Cuiyan Peak in the middle is 2894 meters high; its name comes from its surface covered with abundant grasses and trees.

As one of the places with oldest Buddhism temples in China, there are no less than 300 temples on Mt. Wutai in the past, while only 95 exist today with about 30,000 Buddhist sculpture made of clay, porcelain, metal, stone and wood. Among the existing Buddhist temples, Foguang Temple and Nanchan Temple are the oldest wooden once existing in China, while it is Xiantong Temple (or Lingjiu Temple), Tayuan Temple, Pusading Temple, Canxiang Temple and Luohou Temple that are regarded as the Five Buddhist Temple on Mt. Wutai. In Qing Dynasty (1644-1911), temples on Mt. Wutai began to divide into green temple and yellow temple with coming of Tibetan Buddhism. Most monks of green temples, who wore green or grey frocks, were of Han ethnic group, while monks of yellows temples in yellow believed in Tibetan Buddhism. 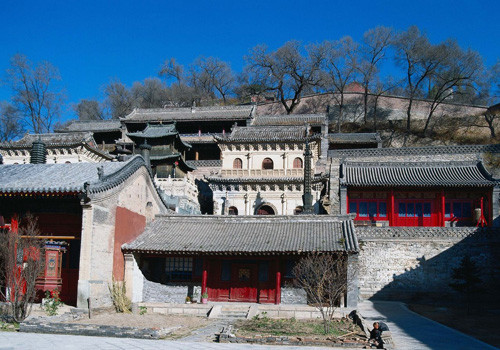 Some Famous Temples of Mt. Wutai

Tayuan Temple (塔院寺) is regarded as the trademark of Mt. Wutai for being the first temple which comes into people's sight when they come to Taihuai. It was the south part of Xiantong Temple when it was built in 1302 by architect Aniko from Nepal, and became an independent temple in Ming Dynasty (1368-1644) with a white tower as its main structure.

At the north of Xiantong Temple is Pusading Temple (菩萨顶), which has an area of 9,160 square meters with about 430 structures. Repaired and enlarged in Qing Dynasty (1616-1912), Pusading is the largest yellow temple.

Longquan Temple (龙泉寺) was built in Song Dynasty (960-1279) to consecrate the Yang Family, which is famous for being an outstanding family of generals (杨家将). The temple covers 15,950 square meters with 165 constructions. It was named after the Longquan Well (literally Dragon Spring Well) by it. The stone memorial arch with three doors, six pillars and 81 dragons is also located here and is known as an important cultural relic of Mt. Wutai.