Lugu Lake of Lijiang City, Yunnan Province, is between Sichuan (2/3 in Sichuan) and Yunnan Province (1/3 in Yunnan), more than 300 kilometers to the Dayan Ancient Village, Yunnan. By the riverside of the beautiful Lugu Lake (Lugu Hu in Chinese), there lives Mosuo Ethnic Group, a branch of Naxi Nationality, the sole nationality still in the matriarchal society period. Since all the things are decided by female, the female of Mosuo Ethnic Group is more passionate and active than that of other places.

The Walking Marriage custom of Mosuo Nationality is the most peculiar and free marriage pattern in the world. To mark the transition to adulthood, grand ceremony is held when a girl reaches 12 or 13 years old. During the ceremony, the adult girl will don the turban and long white skirt (the dress for young woman). From then on, she can select the men she likes by her own and nobody shall interfere. Once the decision made, the girl will suggest him to visit her to her own separate room in privacy (the female is called "Azu" and male "Axia"  then). There is no definite marriage relationship between Mosuo People: they do not marry or be married; no family is built. The relationship between male and female is only maintained by emotion. They live separately and can change their partner by themselves. The children will be raised by mother.


The Flower Chamber for Walking Marriage
Flower Chambers are provided for young Mosuo girls to meet their male guests in privacy. The flower chambers are made by delicate woods in traditional Diaojiaolou (house projecting over the water) style with red, yellow and blue as the main colors. The entrance of the building is sealed to keep other people from entering. 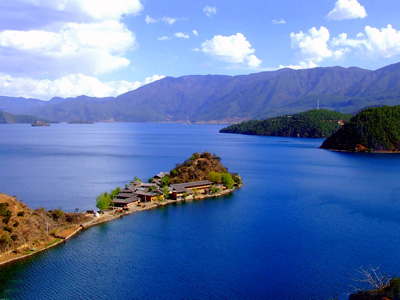 Lugu Lake is so famous that the legendary beautiful sceneries and Mosuo culture makes people dreaming of for long. Once arriving in Lugu Lake, you will be deeply attracted by it. How could the sky be so enhancing? There seems no water in the lake but shining green and blue jewels. You can even see huge moon hung in the mountain during the day. Just beautiful! The females of Mosuo Ethnic Group are quite passionate since the female is in the leading position among the Mosuo People, and some even joke to make walking marriage with the visitors.
Entering the mountain pass of the Oriental Girl's Country (Lugu Lake) -Gou Zuan Dong Kou, you can see the long Lugu Lake running south-north. Sky, cloud, mountains and valleys here are graceful and charming. Want to be closer to the Lugu Lake? You can cruise in the Lugu Lake by Zhucao Chuan, a kind of boat in China.
The mountains around Lugu Lake are also loved by people, especially the Jiamu Mountain. It is grand and high, seeming like a lion resting beside the Lugu Lake, which you can tell its mouth, ear, nose and eyes apart. So Jiamu Mountain is also called Lion Mountain (Shizi Shan): the thick forest on top of the mountain is its hair, the cloud in the middle is its silk on the head, Lugu Lake is its silver wash basin and the colored Yongning Plain is its skirt. 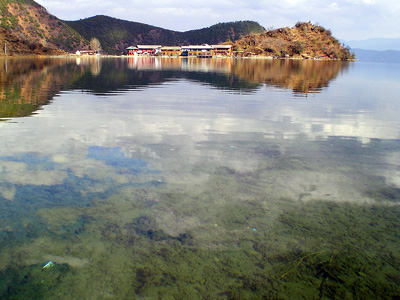 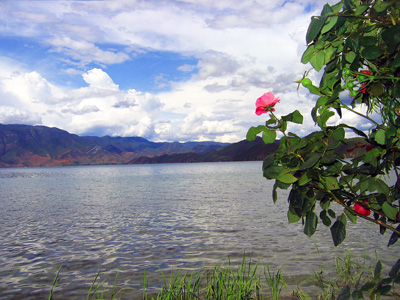 
Residence Beside the Lugu Lake

Villages are scattering everywhere around the Lugu Lake with unique style. Most of the residences are log-cabin wooden houses with planks as titles. The inner construction represents the feature of the matriarchal society family: the room with oven is the center of the residence, beside it lie the rooms where elders and children live; there is another two-storey guestroom on top of which is the residential room of females and males. And features of matriarchal clan commune period have been kept. 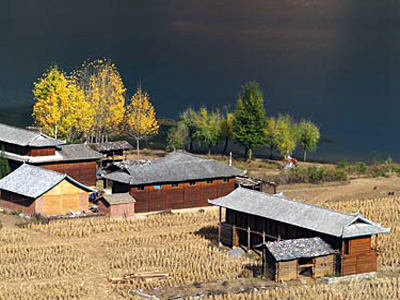 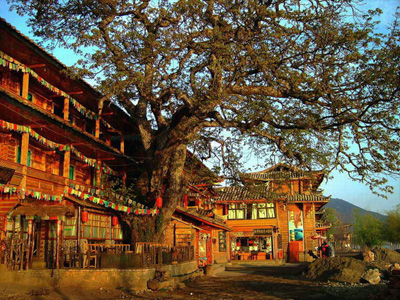 1. The distance from Lijiang city and Xichang city to the Lugu Lake is almost the same: about six to seven hours by bus. And protection money is charged when entering Lugu Lake
2. Since the road condition in Lugu Lake area is quite complicated with continuous hilly paths. So you must drive carefully.
3. Please respect the local custom and do not make marriage relationship with the local people.
4. Generally, you can live in the Lugu Lake area for at least two days, one day in Yunnan province and one day in Sichuan Province. There is no bus between, so you may drive on your own, join a group or take the zhucao
boat.
--- By Haphine (VisitOurChina)
Tags: Lugu Lake Mosuo Ethnic Group Walking Marriage