Guilin is famous for its beautiful mountains and clear waters. In fact, the delicious food here is also evocative. Because Guilin is a multi-ethnic settlement, the fusion of foods of these ethnic groups has formed its own characteristics in the diet. In the following days, I will introduce you to various tasty foods in Guilin and take you on a journey of these delicacies.

Guilin rice noodles is well-known in China for its unique flavor. Visitors who come to the city are recommended to have a try, especially for noodle lovers. 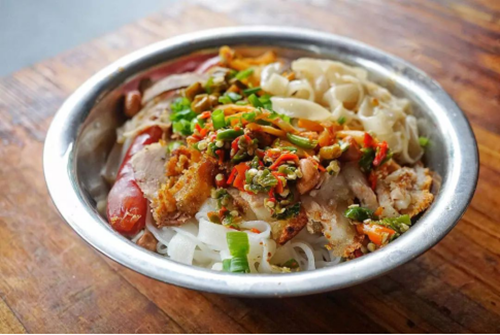 The rice noodles are exquisitely crafted. First, the good rice is ground into rice milk, bagged and drained, kneaded into a ball, cooked and squeezed into round or flat noodles. Rice noodles are characterized by whiteness, tenderness, softness and smoothness. It is eaten in a variety of ways, and the most particular one is the production of its ingredient marinade. Making marinade is different from one restaurant to another, but it is generally boiled with pork bones, beef bones, Siraitia grosvenorii and various seasonings, having a rich flavor. Rice noodles with different additions have diverse flavors, thus Guilin rice noodles can be roughly divided into about ten kinds.

Spicy hot noodles is popular in northern China, but in Lingchuan County (a county belongs to Guilin city), which is adjacent to the urban area of Guilin, now it has become a delicacy that has to be mentioned.

Spicy noodles in Lingchuan originated from Chongqing, and it has been popular in the county since the late 1980s. After continuous improvements and innovations, it has been adjusted to mainly suit the tastes of Guilin people. Pure handmade noodles with secret meat sauce can be added to broth or eaten directly according to personal habits, and the spiciness and numbness can also be prepared based on your own taste. 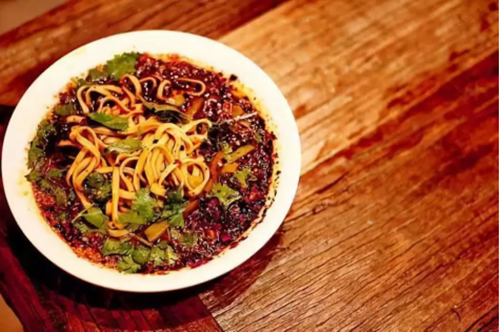 At first there was only one restaurant selling spicy hot noodles in Lingchuan, but now there are dozens. Famous attractions in Lingchuan include Daxu Ancient Town, Gudong Forest Waterfall, Ginkgo Forest in Haiyang Town, etc. Try the local spicy noodles if you go to visit the beautiful scenery there. 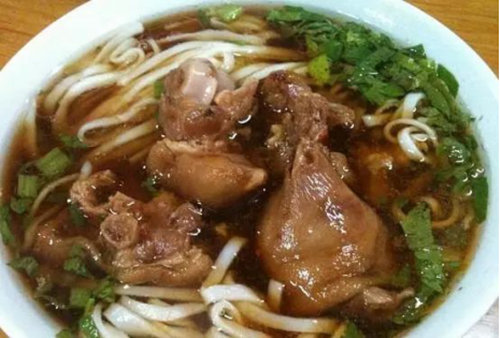 Xing'an County, which is renowned for Lingqu Canal , is located north of the urban area of Guilin. The pig's feet meat rice noodles is a famous delicacy here. Whether the rice noodles is tasty or not mainly depends on the carefully cooked pigs' feet. The well-selected pigs' front hoofs are boiled with Amomum tsao-ko, fennel, dried tangerine peel, cinnamon, cloves, pepper, myrcia, licorice, kaempferia, star anise and traditional Chinese medicinal materials. The pigs' feet boiled in this way are fat but not greasy, having a special flavor.

Sweet-potato powder is a special local product of Guanyang, a county located in the east of Guilin. Sweet-potato noodles, after forming and other processes from this powder, becomes a local delicious food. 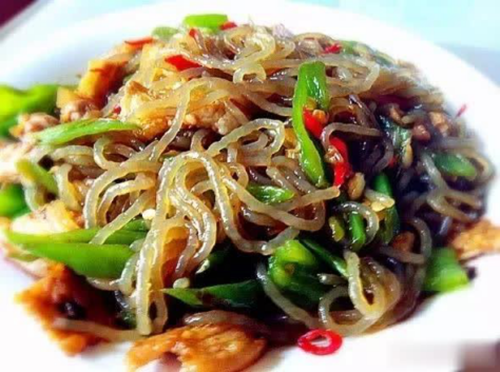 In Guanyang, sweet-potato noodles are generally eaten cold or soup soaked. The noodles is originally sweet, after being boiled and soaked in soup, they become even sweeter and mouthwatering. In summer, sweet-potato noodles boiled in water are often cooled and served with seasonings but with no soup by Guanyang people. 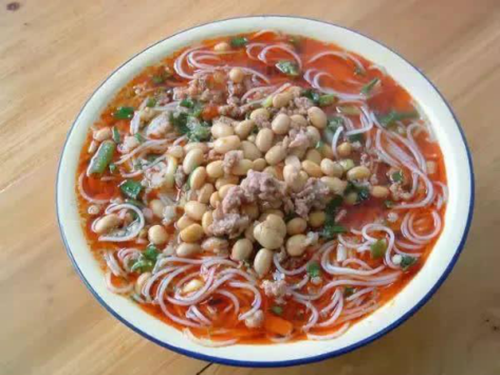 Red oil rice noodles is a special delicacy in Quanzhou County, which is located in the northeast of Guilin. The taste of the rice noodles mainly relies on soup and red oil(i.e. oiled chilli sauce). Pork bone soup is usually used for this kind of rice noodles, and the pig feet soup is better. According to the locals if chicken was put in to make the soup, it would be the best. After stewing the soup and soybeans for a night, the final soup for soaking rice noodles is ready. Add the soup and the stewed soybeans to hot rice noodles, ladle some boiled pork minces and a spoonful of red oil, then sprinkle the chopped scallion pieces and coriander and other spices on the noodles, you're ready to eat.