Guilin rice noodle is a traditional snack of the Han nationality (China's main nationality) with long history. Due to its unique flavor, it is very popular among locals as well as people who come to visit Guilin. 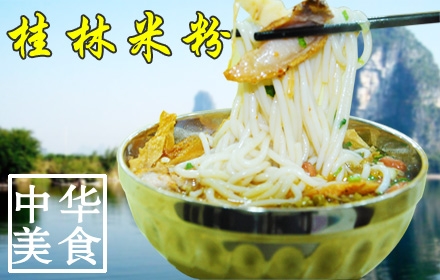 According to local folklore, the first emperor of Qin Dynasty (221BC-207BC) sent his troops southward to build a canal (now is well known as Ling-canal) to link the Xiang River and Li River, which respectively belongs to the Yangtse River and Pearl River system. In ancient time, the weather in Guilin was very humid and the forest was full of miasma, thus many soldiers got sick as they arrived here. The army doctor chose local herbs and cured these diseases effectively. But soldiers were tired of local foods that hindered the recovery of their bodies, for most of them came from northwestern China and liked eating wheat noodles in different cooking methods. Influenced by climatic conditions, in southern China only rice grows. The army general ordered the chefs must think out a food to satisfy soldiers’ tastes. To save lives, chefs racked their brains and finally got a good recipe: rice was soaked in water until swollen, then was grinded into rice milk, chefs used a cloth bag filtered these rice milk, kneaded into dough, and then half steamed it. The half-steamed rice dough was put into mortar and pounded by pestle until sticky. Finally a kind of utensil with many holes at the bottom was used to change the sticky dough into rice vermicelli, and the vermicelli directly fell into boiling water, rice noodles were ready. It is said the noodle was so elastic that it even wouldn’t break when hung on the second floor with its end on the ground of the first. The rice noodle looked pure white and tasted tender, soft and slippery. Then chefs boiled a pot of broth with ingredients of local flavor--the soldiers liked this kind of rice noodle with soup very much. 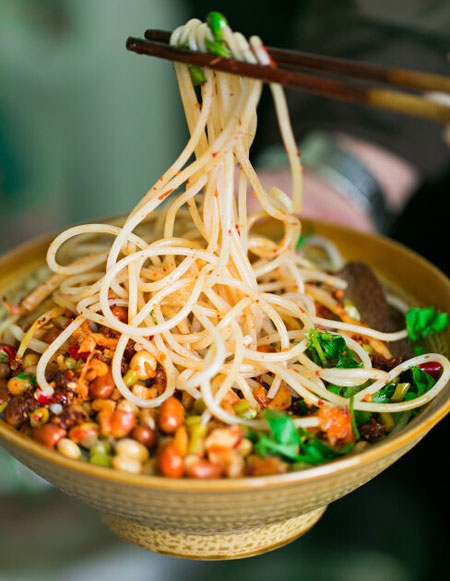 From this story we know the history of Guilin rice noodles can be traced back to some 2200 years ago. It is no wonder rice noodles become indispensable in daily diets of most elderly men in Guilin.
After two thousand years of development, Guilin rice noodle become known far and wide with local flavors. Besides good quality rice noodles, the meticulously stewed brine is another important part of this delicious snack. Though different restaurants have their own secret recipes, the basic method of processing brine is almost the same--use fermented soybeans, star anises, Chinese cinnamons, liquorices, amomum tsao-kos, fennel seeds and other condiments as ingredients, boil with pork or beef by high fire first, then convert into slow fire and keep boiling until the essences of different ingredients are refined into the juice (brine), finally add local rice alcohol and siraitia grosvenors (taste sweet). Mixing the aromatic and delicious brine with fresh-made rice noodles, adding some oil fried peanuts, chopped green onions and peppers, as well as some fried pork, brined slices of beef or pork liver, a mouth-watering dish is served up! You will never forget once you try it. That is why Guilin rice noodle was selected as one of the 14 home-sick dishes in China by Cable News Network.

During the period of Republic of China, especially the Second World War, Guilin acted as backyard of battles and lots of celebrities across China took refuge in Guilin. Guilin rice noodles impressed their tongues deeply. After the war, the reputation of Guilin rice noodle spread whole China accompanying these celebrities back home. 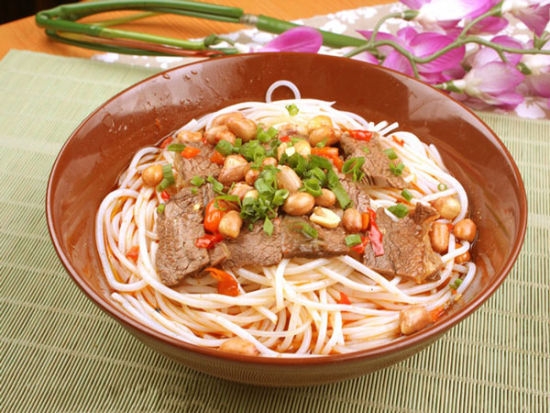 Today in Guilin, while tasting the rice noodles there are mainly two kinds of ways: one is with soup added, while the other is without. “Horse Meat Rice Noodle” and “Dànzi Rice Noodle” are two kinds among Guilin rice noodles. When you eat horse meat rice noodles you can curiously find the size of bowl is as small as a tea cup, only one long string of rice noodle in the bowl with horse bone soup and slices of braised horse meat with green coriander, sesame-seed oil and fried peanuts. Marshal Chen Yi had once written a poem “would like to be Guilin people, do not want to be immortal” just after eating this kind of Guilin rice noodle. One bowl of horse meat rice noodle does not far enough satisfy your stomach, people always eat more than ten bowls of this rice noodle one time. Another kind “Dànzi Rice Noodle” was popular with local people. Dànzi means “carrying pole”, just as its name implies, this kind of rice noodle was carried everywhere in street or lane for sale. It only mixed up brine, meat, fried peanut and other ingredients without soup. 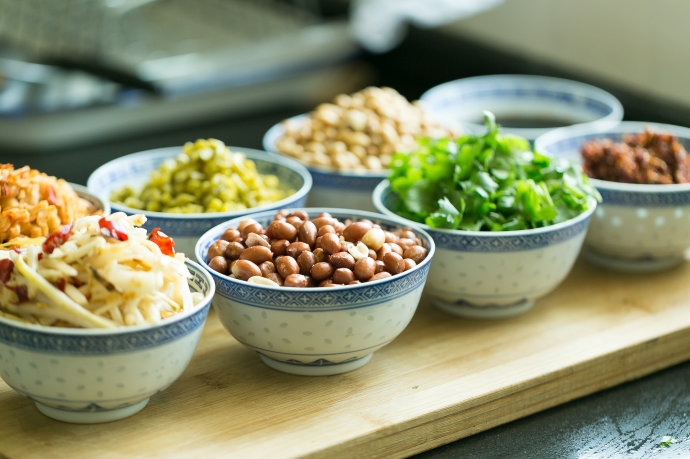 Nowadays because of installing machines to replace manual labor, rice noodles can be produced in great amount every early morning, so rice noodles become cheap and serve as breakfast for most Guilin people in the morning.