With the gradual improvement of living standards, people pay more and more attention to the adjustment of dietary structure. Many people advocate vegetarian food as the main diet and supplemented by meats, which not only ensures the effective absorption of nutrients in food but also prevents diseases caused by eating too much meat. In China, generally speaking, meat and fish dishes are a big part to judge people's cooking skills, so the most well-known dishes in various places are often meat and fish ones. Below is an introduction to some famous and tasty meat and fish dishes in the counties belonging to Guilin. 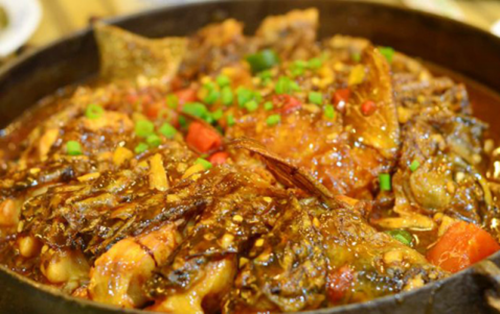 When you come to Yangshuo, a well-known tourist destination in Guilin, the most worthy of a taste is the local beer fish. Yangshuo Beer Fish is a famous local dish, which is fresh and tasty, without any trace of fishy smell. The aroma of beer and the cooked fish can surely stimulate your appetite. As it is said "you can't forget it after trying it", beer fish in Yangshuo is highly praised by tourists with its unique tastes.

Yangshuo Beer Fish is made from fresh carp picked up from the Li River, fried with scales, and cooked with beer, tomatoes and other ingredients. That kind of deliciousness will stay for a long time on your lips and teeth. 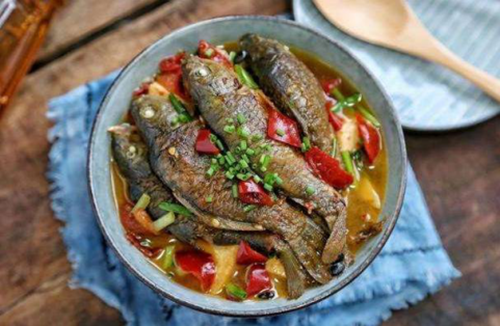 There are many types of fish in China, rice flower fish is a specialty of Quanzhou county in Guilin city. Rice flower fish is a carp fry that grows in paddy fields, it gets the name as it eats rice flowers that fall into water. Before eating, cook the fish with sour water and salt and dry it on the stove. When it is the time to eat, simmer with water, add fermented soybeans, garlic, ginger and spices like chili powder in it. Quanzhou Rice Flower Fish is a dish with delicate taste, proper saltiness and spiciness, very delicious. 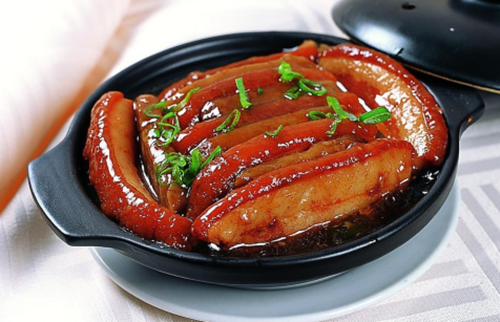 Lipu city(formerly named Lipu county, under the jurisdiction of Guilin), noted for the Silver Cave, is located in the south of Guilin. It is rich in high-quality taros. Lipu Taro, known as the king of taros, has always been one of the most famous specialties in Guangxi province. Taro can be eaten in a variety of ways. It is said that during the Jiaqing reign (1796-1820) of the Qing Dynasty, a renowned chef in northern Guangxi steamed a dish with fried Lipu taro and pork slices, which is so tasty that from then on the Steamed Lipu Taro Pork became an indispensable dish in northern Guangxi, especially in the area of Guilin, for festivals and banquets. 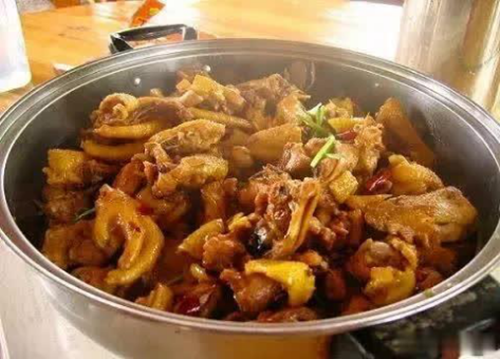 Another delicacy in Lipu is Braised Lipu Taro Chicken. The taro is glutinous but not greasy after being stewed. After absorbing the fresh flavor of chicken, it becomes more mouthwatering. This dish can be regarded as one of the specialties of Guilin. 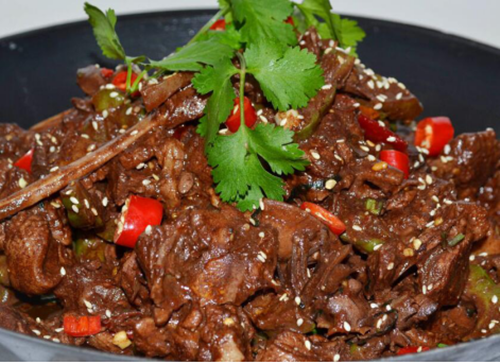 Besides chicken, people also like to make duck into tasty dishes. Quanzhou Vinegar Blood Duck is a well-known delicacy in the county. After the beginning of the fifth month in the lunar calendar, green ducks are sold on markets. People in Quanzhou prefer to use green ducks for early adopters. Quanzhou Vinegar Blood Duck is made based on a dish commonly eaten in western Hunan province, having unique flavor. 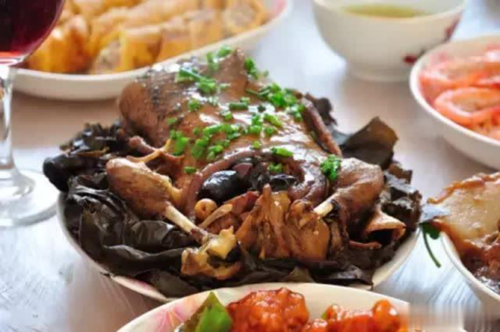 In Ziyuan county, which is located in northern Guilin and known for its Danxia landform, lotus leaf wrapped duck is a traditional nourishing dish. The steamed duck wrapped in lotus leaf is quite nutritious and delicious. People use green lotus leaves in ponds to wrap fried ducks stuffed with ingredients in their stomachs to make Ziyuan Lotus Leaf Wrapped Duck, which is fragrant and palatable, rich in tastes. 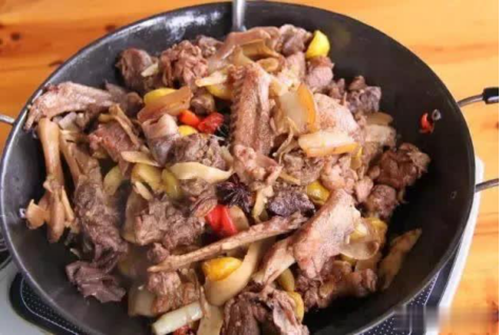 Instead of all mentioned above, the people in Yongfu county prefer an easier way to make original duck dishes. They cook duck meat with raw wood fire. Being added basic cooking seasonings, simply fried and braised, the duck meat has a very special flavor after absorbing the aroma of firewood. 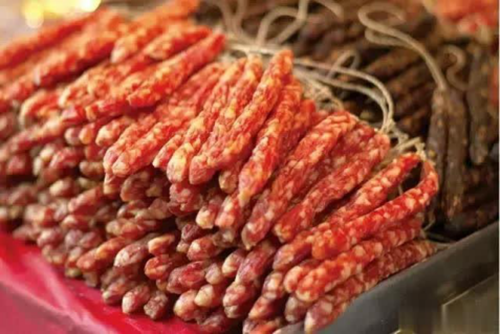 The wise Chinese used to store meats by making them into various preserved ones so that they could be kept longer. As one of the favorite traditional foods among Chinese people, preserved meats have a long history in the country. The common ones include preserved pork and Chinese sausage, and the latter is another delicacy of Yongfu county. Chinese sausage refers to meat products with Chinese characteristics made by putting chopped pork with auxiliary materials into pig intestines and being dried. Yongfu sausages are generally stir-fried with peppers, garlic leaves, etc., having a strong flavor, and the fragrance is mouth-watering. 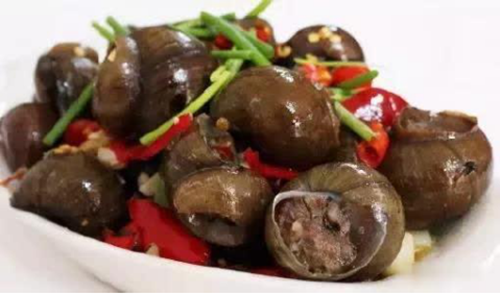 People in Guilin are interested in making a variety of stuffed dishes, and among these the stuffed field snail is a special food of Yangshuo county in Guilin. The taste of Yangshuo Stuffed Field Snail is different from that of ordinary ones. To make this dish, you should first take out the snail meat, chop the pork, coriander and other condiments together, then fill them to the snails’ empty shells, add soup to cook together, the taste of it is fresh and tender. 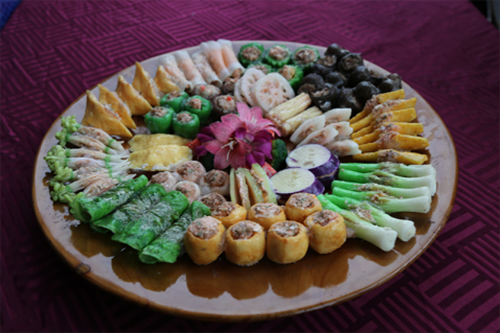 In Pingle county, south of Guilin, there is a distinctive food called Combo Eighteen Stuffed Dishes, which is made of eighteen different raw materials as the shell, with pork, eggs, tofu and other fillings, and made by means of wrapping, filling and stuffing. It is a home-cooked delicacy in this area. Combo Eighteen Stuffed Dishes in Pingle includes stuffed tofu, stuffed bitter gourd, stuffed mushroom, stuffed eggplant, stuffed pepper, stuffed lotus root and so on, covering almost all stuffed dishes in Guilin.