Ancient geological movement created the world’s largest estuary alluvial island and at the same time gave birth to a fertile river plain - Yangtze River Delta. Today it is the most flourishing and populated region in China. In the course of urbanization, in the Xinghua City of Jiangsu Province, there is a distinctive land seemingly forgotten by time. In summer peasants water a sort of lyophilic vegetable - the taro. The land under their feet is called Raised Field (Duo Tian), a unique landscape in the world. To seek food from limited space, smart forefathers piled up oozes from low marshes to make cultivable land. Most of raised fields can only be accessed by boat. Not only do they enhance the region’s rugged natural beauty but also breed great food materials.

To the east suburb of Xinghua, the Duotian Town is dotted with countless different sized raised fields, which give it the name "Land of thousands islands". In spring, these raised fields are the sea of rapeseed flowers, presenting the most beautiful countryside scenery. In summer, they are green with lofty peltate leaves of taros. The tallest can reach to 6 feet! The edible part of taro is its huge corms. Corm has rich nutrition and is shelf-stable. It has been widely cultivated in Yangtze River Basin since 2000 years ago. However, the yummiest grows in Xinghua. Dragon Purple Taro (Longxiangyu) is a specialty of Xinghua. It has smooth skin and glutinous texture, being the honor of peasants. People believe the unique fields are the most important contributors to this tasty. Water is indispensable for the growth of taro, but stagnant water easily causes basal rotting. Raised Field is perfect for the growth of taro as it has moist or even swampy soils and is convenient for irrigation. But watering is a tough task. Peasants get especially busy watering taros with long water ladle in summer as they need to water them often four times a day, each lasting for one hour to meet the water demand of taros. At noon, they often catch fish and cook them on the boat. They are good at making full use of gifts from the Mother Nature. The root, or rather corms have absorbed enough nutrition and swell up after summer heat. August is the harvesting time. The edible starchy corms have purple color. They can be roasted, baked or boiled into various kinds of dishes, and even served as staple food. Taro is often regarded as the emblem of wealth. Taro in Chinese is pronounced "Yu Tou". "Yu" means "meet". An old saying goes that eating taro on the New Year’s Eve will help you meet nice people that will help you. 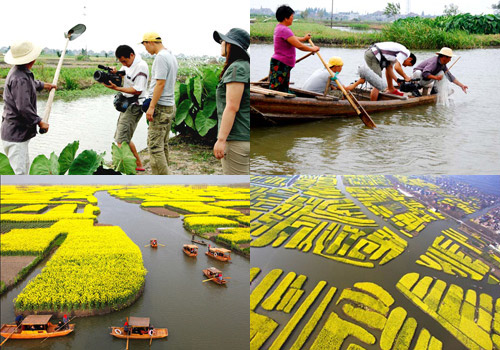 Boiled Taros and Tofu with Crab Cream (Xiehuang Wang Doufu) is long-standing in the long list of Huaiyang Cuisine. When taros are ripening, crabs in the lakes also become fat. Steaky pork and taros are chopped into cubs. Salted taros are then steamed in oven for about ten minutes. Then the pork meat is simmered with dark soy sauce, cooking wine, anise and other condiments. Crab cream is poured into the pan and instantly fill the air with its tangy smell, making light tofu and taros pleasantly greasy. 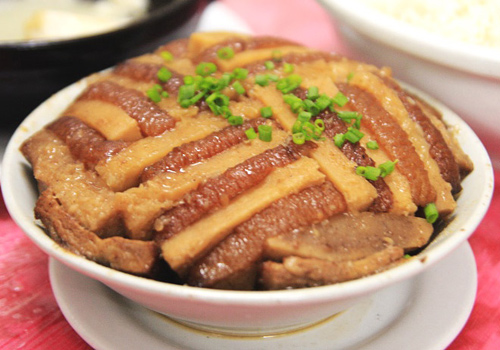 Braised Taros and Pork (Yutou Hongshao Rou) is even more delicious. Taros and pork meat are braised together so that the meat become savory ad taros suck up enough gravy – just to ignite the taste buds. In the dinning tables of locals, taros always have a share. In the most economically vibrant area of China, peasants of Xinghua make full use of every inch of their land. The activity and wisdom of seeking food is ubiquitous.

Fantastic pictures! I'd love to try taro in China!