Chinese Noodles has a history of 4,000 years according to an archeological discovery in Qinghai Province where a 50-centimeter-long noodle made of millet was unearthed. Eating Noodles is a part of birthday celebrations in China. Long noodles stand for longevity in Chinese culture. Noodles are regarded as the staple food in North China and usually served as breakfast in South China. The reason lies in the two agricultural patterns in China: wheat and millet are mainly produced in North China while rice is mainly produced in South China. Chinese Noodles are generally made from wheat flour, rice flour, tapioca starch or any kind of starch, with eggs, peanuts, meat, shrimps, vegetables and so forth as ingredients. The most common noodles are wheat flour noodles and rice noodles.

Noodles are cooked steamed, fried, boiled, or served in soups. Due to various cooking ways and ingredients, nearly every region of China has its own noodles, such as Lanzhou beef noodles, bean sauce noodles in Beijing (炸酱面), sliced noodles (刀削面) in Shanxi Province, pot noodles (锅盖面) in Zhenjiang City, hot-dry noodles (热干面) in Wuhan, Sichuan noodles with sesame peppery (担担面), Guilin rice noodles (桂林米粉), etc. Today most noodles are made by machine. But handmade noodles are still popular in China. Making ''handmade noodles'' is regarded as a necessary skill for girls in central China. The process involves pressing, pulling and rolling the dough with hand or a rolling pin repeatedly.  Eventually the dough is turned into either long or thin or flat or thick noodles. 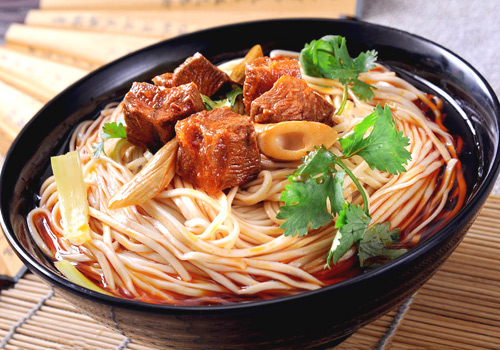 The representative wheat noodles should be Lanzhou beef noodles. A day begins with a bowl of beef noodles for Lanzhou locals in Gansu Province. The city has over one thousand noodles restaurants. And some one million bowls of noodles are consumed daily. Noodles are absolutely the staple of Lanzhou. Beef Noodles are not only the local flavor snack but also enjoy a high reputation in the whole country. It takes few minutes to pull the dough and make a bowl of noodles, but proficiency is strongly required. From sorting flour, kneading with water, covering with a wet cloth, to rolling and pulling the dough, the elasticity of protein in noodles is fully utilized. The history of Lanzhou beef noodles can be traced back to Qing Dynasty. The originator is said to be a Muslim called Mabaozi. Legend has it that Ma Baozi was born in a poor family and he made beef noodles and sold them in the street. Afterwards he added boiled liver of cattle and sheep into beef noodles and found it much more delicious. Since then Ma Baozi had more and more customers and opened a restaurant. His son took over his business and attempted to improve the beef noodles. Today his beef noodles has nearly been a household name in China. It is known that liver can pure toxins in eyes. May be that’s why western Chinese people have brighter eyes. Besides, the authentic Lanzhou beef noodles should have clear soup. 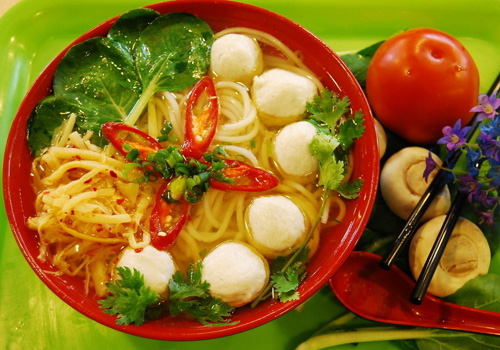 Rice noodles fall into different categories such as Mixian (米线), Shahe fen (沙河粉), Rice noodles roll (肠粉). Rice flour and water are the major ingredients of rice noodles. Guilin Rice Noodles is known for its unique flavor. Firstly rice grains are soaked in water to swell; next they will be grinded into liquid. After water is filtered, the dough will be boiled and squeezed into flat or round slices. The round noodles are called Mi Fen(米粉) and the flat noodles are called Qie Fen (切粉). Rice noodles features white, tender, soft and refreshing. The most popular rice noodles in Guilin should be noodles mixed with brine. Brine is the key element to make delicious rice noodles. A number of ingredients are added to make good brine, such as beans, anise, pork, beef, Sanhua wine. Apart from cruising the Li River, having a bowl of rice noodles should also be a must-do for tourist who goes to Guilin. Rice noodles restaurants can be found easily in Guilin.
---By Sunny (VisitOurChina)
Tags: Chinese noodles Lanzhou beef noodles Guilin rice noodles

It takes me about 15 mins to make lasagna. You shloud look for Barilla Lasagna Con Ouvo.. You don't need to pre-cook the pasta, so all you do is lay it out and pour in the meat and cheese.. and then cook in the oven for 20 mins. :) So maybe it takes 35 mins (max) but that includes cooking time. :)

Hi, Raphael. Thank you for sharing with us your cooking experience. If you come to visit China, I strongly recommend you to have a taste of Chinese noodles, which must be different from lasagna.