With its diversified geographic environment and corresponding climate conditions, China is endowed with kinds of food materials which results in rich eating habits with distinguished features in different areas and regions. In traditional Chinese dietary, there is a particularly dainty come from the bamboo grove- bamboo shoots, which are fully employed in almost each of the four major Chinese cuisines- Cantonese, Sichuan, Shandong and Huaiyang (combining Anhui, Jiangsu and Zhejiang). Chinese chefs love bamboo shoots because of its simplicity of material quality which make it easy to match and assimilate other tastes, in especial to produce a splendid balance with greasy meat.

Bamboos can only flourish in a particular situation with abundant rainfall and relatively steady warm temperature. In consequence, the south China is favored by the nature and gifted with this kind of slim plant, and many people live around are their masters just living by them. In the southeast province of Zhejiang, numerous counties are abound in bamboos, and maso bamboos are the most common kind, from where the toothsome winter bamboo shoots are gained. As a rule of thumb, only a pure bamboo grove can produce bamboo shoots; the mixed plants of other species in the grove will affect the development of bamboos and no bamboo shoot can be found.
A sprout of bamboo hidden under the soil layer, winter bamboo shoot is not easy to be detected. Seen from the appearance in the grove, nothing exists except bamboos; but for those experienced masters, they can always figure out the accurate location of a bamboo shoot just from the colors of the tip of the bamboo. To find a bamboo grew for several years in the first place and then to dig along with the bamboo rhizome; when seeing the shoots, to dig and take out it gently. The fresh-keeping of this food is a big problem as the sprouts is the most vigorous part of the plant. Thankfully, smart bamboo masters have worked out an easy way, a best way taking advantage of the nature - to bury the shoots under the soft and moist soil on the site, and this retaining of the freshness will last for at least two weeks. 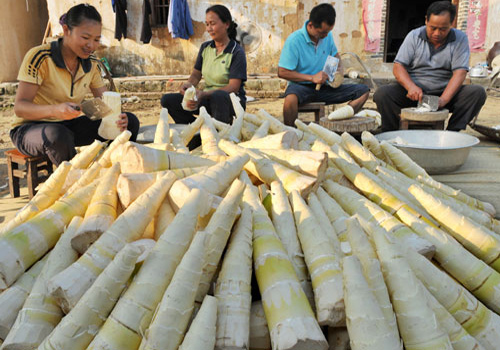 In the bamboo grove in Liuzhou, a city with only 2-hour drive to Guilin in the southwest province of Guangxi, it is the place where the sweet summer bamboo shoots are growing. The best time to reap the finest and most tender shoots of this kind is from the midmonth of every June to the midmonth of September. Different from the winter shoots in Zhejiang, they are cut above the soil, and the reaping must be in right time as these shoots will turn to hard quickly after breaking through the soil. If cut not timely, they will taste bitter. Though less fresh and tender than winter shoots, summer shoots are the materials to make the best known pickled sour bamboo shoots of Liuzhou. The freshness of newly cut shoots is retained only for several hours, and people have to speed up to peel off the skins and pickle them in unique way, otherwise these shoots will soften and then rot after being cut in 4 hours.
Different ingredients conduce to various dishes, while slight differences of even one kind also contribute to varied flavors. A material common to find in bamboo groves, the bamboo shoots present frequently at table though cooked in different ways. Braised Bamboo Shoots and Bamboo Shoot Soup with Salted Pork are the most familiar homely dishes in Zhejiang. The former one is simple to cook- just cut fresh shoots into sections and braise them thoroughly in oil with sundry seasonings. As for the later dish, stir-fry salted pork and bamboo shoots according to the same proportion, and then stew with soup-stock; the blending of the salt flavor of the pork and the delicate of the shoots never fail to delight local mouths. 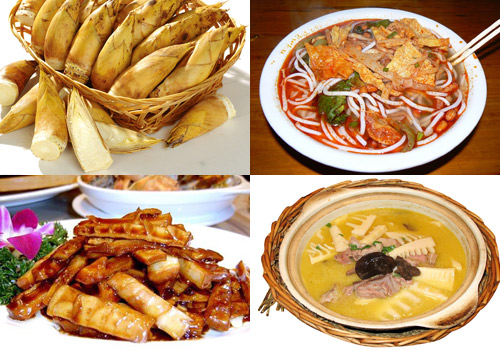 Among all typical local dishes of Guangxi, the stewed little yellow croaker with soybean and sour bamboo shoots is an extremely appetizing dish. Bamboo shoots are pickled in sour flavor in a unique way before cooking in Liuzhou, and this distinct flavor not only contributes to many a delicious homely dish but also a foremost auxiliary material in a national known local snack, Luo Si Fen- the rice noodles cooked in spiral shell soup.
Bamboo shoot is a kind of seasonal food that difficult to store, but the vital reproductive bamboos offers its delicate shoots to people at most of the time of a year all in spring, summer and winter. Though slightly different in the flavor, they are essentially the same and loved by every bamboo-shoot addict.
--- By April (VisitOurChina)
Tags: bamboo grove bamboo shoots Chinese cuisines Zhejiang Guangxi