For those who don't know what a strawberry day is, it is a current term that I have put into creation that refers to not a good but also not a bad day. You know, sometimes when you eat a strawberry it's nice and sweet, and some times when you eat them they're sour as can be, and sometimes you get one that's just in between sweet and sour, and it's just good enough to not spit out. That's what a strawberry day is, it's in between good and bad. And it just so happens that on this strawberry day, I went strawberry picking.
Our teacher took us on a field trip, haha, get it a strawberry field, "field" trip, yeah you'll get it in a second. We met up at the san li dian traffic circle and jumped on a bus heading towards Daxu (大圩). Daxu is one place in Guilin that most tourist agencies barely ever bring up, it’s not Yangshuo, and it’s not Elephant Trunk Hill, which instantly means it’s not worth going to, by their standards. However I will say this Daxu is a very cool, interesting, and fun place to go and spend a day. 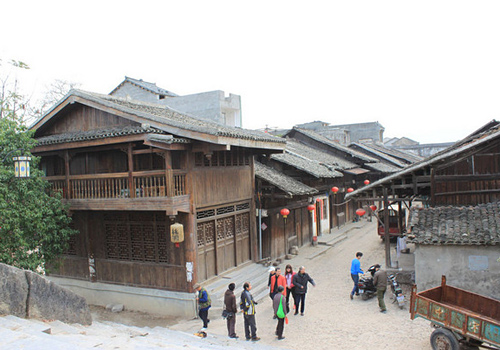 To get there all you have spend is 4RMB, it’s about a half an hour bus ride, and is well worth the money and the trip. There’s an old ancient town there, which has been extremely well preserved and is inhabited by locals, there’s an ancient bridge which is beyond beautiful, and there’s even a giant grassy knoll next to a river, which has dogs, horses, chickens and birds running about. If you come to Guilin and want to experience something that most other travelers wont, than I highly suggest going to Daxu to see the old streets, bridges, and just to get a feel for what things might have been like way back in the day.
If I were to compare Da Xu with another ancient little town near Yangshuo, Xingping (兴坪) without hesitating, I would say Da Xu is much nicer, and less populated by travelers.

The bus ride was about 20 minutes and it was very pleasant, spent it talking with my teacher, which is always kinda intimidating to do, I'm always afraid she'll just sit there correcting my Chinese or something. She didn't, we spent the entire time just yapping away, very pleasant. We got off at the strawberry field, and we instantly got beaten down by the sun, man was it hot. Right next to the street was an older lady, probably about 145 years old, she was selling her strawberries for 15 RMB a jin (a Chinese unit of weight, 2 jin equals to I kilogram), that didn't float our boat, so we went down into the fields and found a nicer lady and she gave us a better deal. She let us go wherever we wanted to in her area and pick and eat as many strawberries as we could stomach for 10 RMB. (AWESOME) 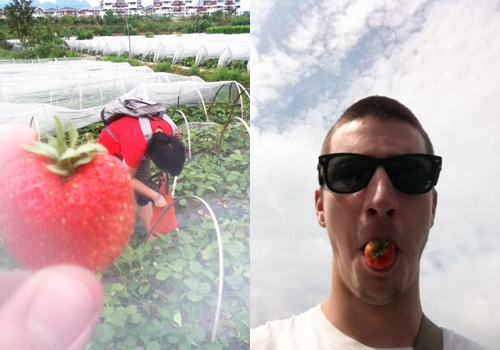 Now I'm a Hagan, that means I'm kind of naturally mischievousness, but it's not in an evil way as much as its in a playful, sweet, kind of jerk-ish way, also our attention spans are very limited (I'm speaking about the boys in our family, not the girls), so picking strawberries for me after about 10 minutes just wasn't fun anymore, and that's when things started going down hill. I looked at the strawberry I just picked, and I realized something, it looked like a red ball, and my buddy was about 25 feet away and I thought, “I could eat this which would be nice, or I could through it at my friend and laugh, which would be so much nicer." So after much thought, which involved me looking down at said strawberry, and then at my friend and laughing to myself, I threw it at him, and you know what, it was so better then eating it. This started a strawberry war, it involved a few people, and lasted a while until our teacher came over and asked why we weren't eating them, At this point I innocently through one into my mouth, and commented on how great it was, and stowed one more away in my palm waiting for her to leave so I could beam my friend in the back of his head. After hitting my friend in the back of his head with much gumpshin, I walked over to the other part of the field to see what everyone else was doing. They were just picking strawberries and taking pictures. My buddy wanted to take a picture with me, but accidentally stepped on my foot while trying to look cute, currently my foot hurts to even put weight on, so when she looked at me and said sorry, I thought about saying it's cool, but than I realized I had a strawberry in my hand, and promptly through it at her upper lady section while screaming, "REVENGE!" 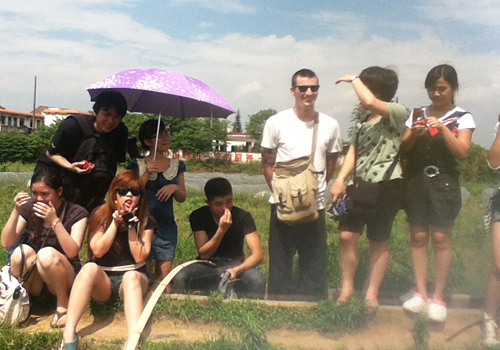 After a lot of flying strawberries, we all went to "Strawberry Island" (草莓岛), where we spent the rest of the time playing on the rickedy bridge, monkey bars, wood slides, and such. It was nice to be with a group of people who appreciated someone able to hang up side down on the monkey bars. We ate together and then went our separate ways.
Now, I know what you're thinking where's the bad part? Where's the sour that separates this strawberry from being awesomely sweet? That part lies in that fact that the strawberry war only involved three people, if it had involved everybody, than this strawberry day, would of been an orange day. I'll explain what an orange day is next time.
---By Daniel (VisitOurChina)
Tags: Guilin Yangshuo Daxu Strawberry Island