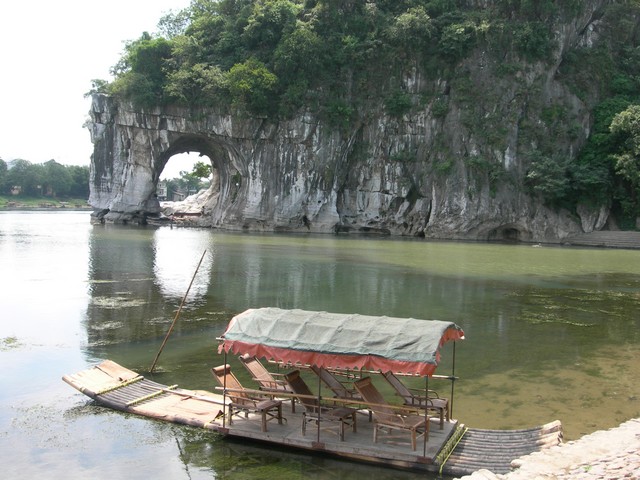 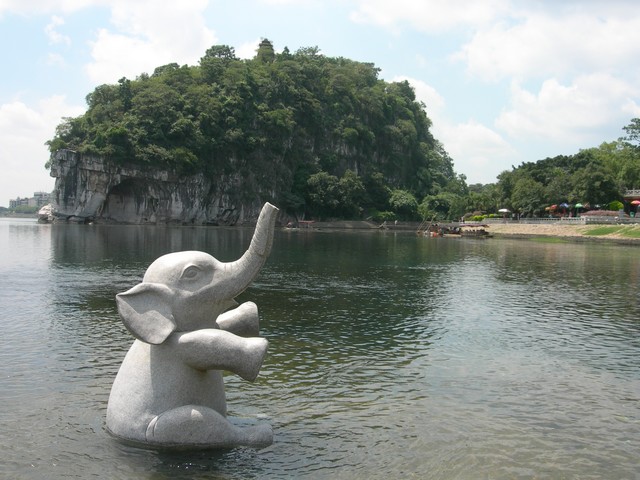 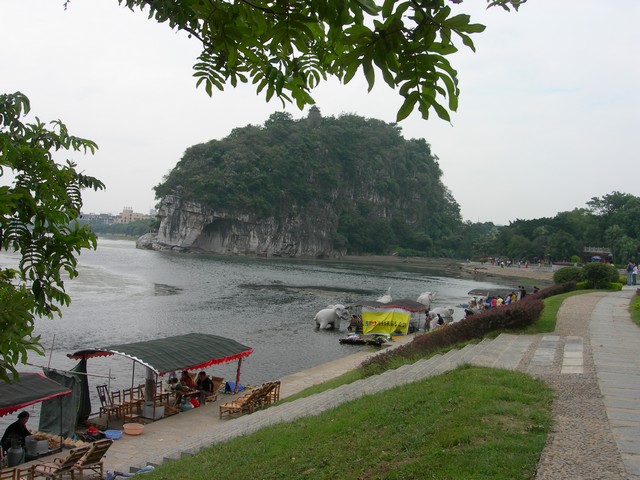 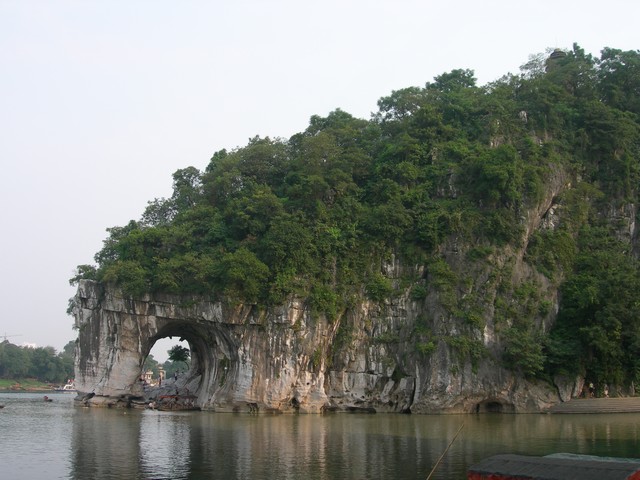 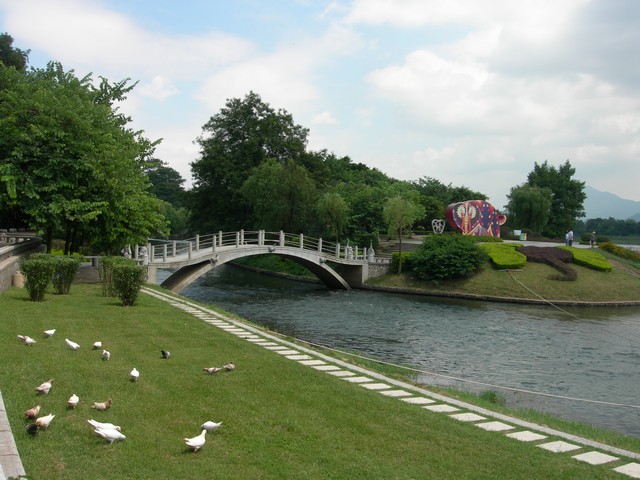 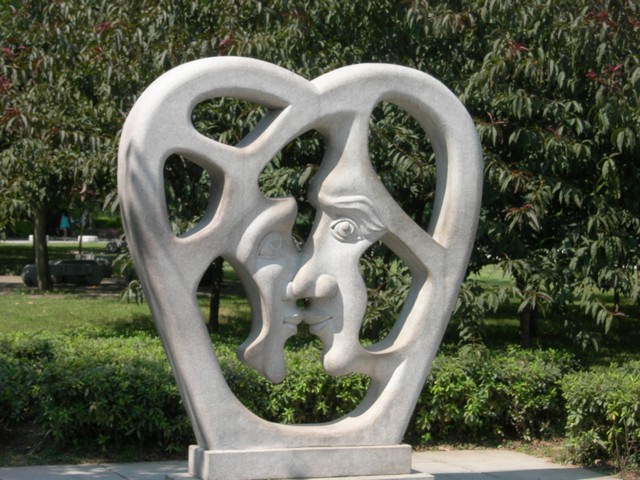 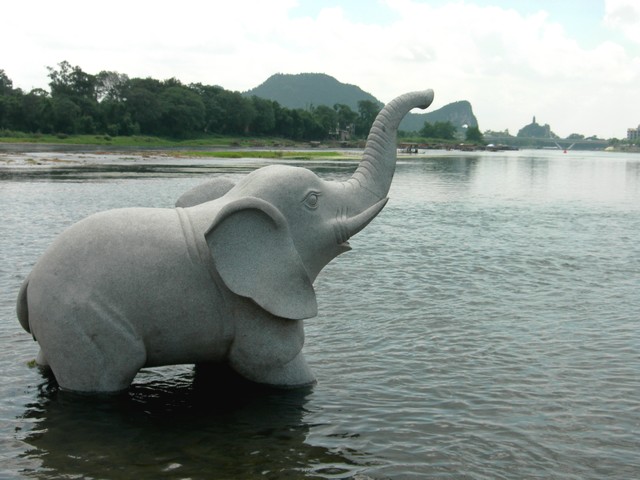 
Location: On the western bank of the Li River, at the confluence with the Peach Blossom River, southeast Guilin city, Guangxi Zhuang Autonomous Region (aka Guangxi Province).
Opening time: 08:30-16:40 (half an hour more to visit)
How to get there: On private coach or by buses No. 58 (free tourist bus), 2, 16, 23, 57 and get off at the stop of Xiang Shan Gong Yuan (象山公园, stop of Elephant Trunk Hill Park)
Best time for visit: all year long

One of China's most picturesque karstic mountains of Guilin

The Elephant Trunk Hill (Xiangbi shan, 象鼻山) is one of the four top Guilin attractions that all visitors coming to town usually stop by. Regarded as the symbol of Guilin city, the site is the most famous karstic hill formation out of the many rising straight out of the ground throughout the city. This natural karst rock formation got its strange name for its particular shape resembling outstandingly like an elephant sucking water with its trunk into the pristine Li River. This 3.6 hundred million years old hill made from the seabed limestone of the river was in ancient times named in different ways: "Li Hill", "Yi Hill" and "Chenhui Hill". With a 200 meters elevation, 55 meters in height, 108 meters in length and 100 meters in width, the Elephant Trunk Hill is imposing itself in the topography of Guilin city. The park where locates the hill is also a curiosity for its many must-see attractions such as the Moon over the Water Cave (Shuiyue Cave), Elephant Eye Cave, Puxian Pagoda, Love Island and Yunfeng Temple. Climbing the hill is the opportunity to discover another view over the amazing cityscape of Guilin, for an everlasting memory and picture shots. It is a cool scenic spot near to the city center, recalling locals and visitors about the beauty and power of Mother Nature. 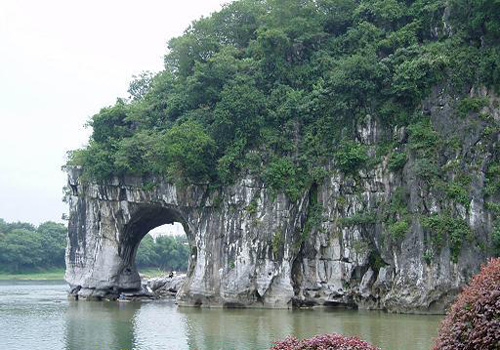 As for any Chinese scenic spot, a legend surrounding the attraction gives a deeper insight and impression to visitors. While taking pictures of the hill, one will notice the pagoda on the top, looking strangely enough like the handle of a sword (for the most imaginative) on the back of the "elephant". This curious sight is recalling locals the legend around the formation of the hill. In a time far far away, the Emperor of Heaven decided to conquer the Earth riding on the back of his elephant. Kind-hearted and dedicated to the poor, the elephant came down to Earth to help the humans in their labor but finally got sick. With the Emperor so angry at seeing his elephant helping the humans, he deserted him, letting the poor sick elephant's fate at its own course. Grateful for its help, humans nursed the sick elephant back to health, making the elephant wishes to stay definitely on Earth along with the humans, helping them plow their fields and forget about its master. Infuriated by the scene that was occurring on Earth, the Emperor of Heaven threw his sword on the elephant drinking at the river's edge, finally turned it into stone. Passed away in the world of humans, the elephant is still near to the friendly people that helped him, guarding the city forever and ever.

The Elephant Trunk Park has several features appealing to visitors' attention for a half an hour to a one or two hours visit. Though it is the most important attraction of the site, the Elephant Trunk Hill is surrounded by many scenic spots of interest listed above: 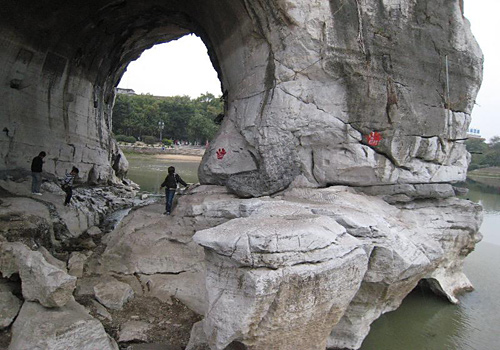 Maybe this rock formation is the sight that first catches visitors' eyes when entering the site, the Moon over the Water Cave is the big hole penetrating the rock from side to side that visitors will see, taking the shape of a full moon between the trunk and the body of the Elephant Hill hence a bizarre name. Unique rock phenomenon - that can be seen in several places in Guilin vicinity - the moon hole is about 17 meters long, 12 meters high and 9.5 meters wide inspiring poets and painters since the early ages of Guilin settlement. Boating through the cave to the river on a bamboo raft, visitors can appreciate the more than 70 inscriptions that can be traced back to the Tang Dynasty (618-907) among which some famous poems such as the one of poet Lu You, one of the four great poets of the Southern Song Dynasty (1127-1279), poet Fan Dacheng for "The Grave of Flowing Water and the Moony Cave" and poet Zhang Xiaoxiang with "The Foreword of the Poet of Zhaoyang Pavilion". Here is an example of the most famous poems written on the Elephant hill:

"There is a moon at the bottom of the water;

on the water the moon floats.

Water is flowing away but the moon stays;

when the moon is gone the water still remains."

At night, the reflects of the sun on the Li River gives a particular color to the cave and the Elephant Hill, a scenery praised for thousands of years by locals, poets and officials.

The Elephant Trunk Hill flourishes with many other attractions among which another cave can just be seen and visited by adventuring on the back of the Elephant Trunk Hill. Being a highway up to the top of the hill, the stone path leads travelers to a cave on the hillside literally going through the hill. Of 2 meters in height, 10 meters in width and 52 meters in length, the Elephant Eye Cave has got its name for it location exactly at the right place of the eye of the Elephant Hill. Standing on the cave, tourists will be afforded a good panoramic view over Guilin city. 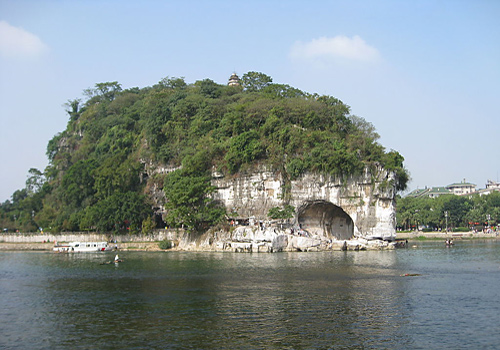 In the distance, one can notice the presence of a pagoda standing for the most imaginative people as a precious vase or, according to the legend, as the handle of a sword thrown on the head (or back) of the elephant. Built in the Ming dynasty (1368-1644 AD), this two-storey pagoda (14 meter height) is where seeing an image of the Puxian Bodhisattva, listening to local people many legends surrounding it.

Like any Chinese scenic spot, the Elephant Trunk Hill Park has its own temple. Located at the southwest foot of the hill, it is highly recommended to stop by the Yunfeng Temple built during the Tang Dynasty (618-907). Ranking as one of the four most famous temples in Guilin city, the Yunfeng Temple - though rebuilt in 1897 during the reign of Emperor Guangxu (1875-1908) and hold the name of "Fuyin Temple" - played an important role in the area. Indeed, the temple was used as a gathering place for comrades of the Taiping Heavenly Kingdom (1850-1864), and the Revolution led by Dr. Sun Yat-Sen (1911). Opened to the public today, the Yunfeng Temple houses many historical and cultural relics from Guilin ancient times.

Unsuspectedly, this little island standing just in front of the Elephant Trunk Hill out in the Li River is appealing to visitor's curiosity for its many winding paths, stone statues and other objects dedicated to love. By crossing the stone bridge carved with elephants, one can have a rest on this island covered with bamboo groves, with the Elephant Trunk Hill and the Li River for only sightseeing. 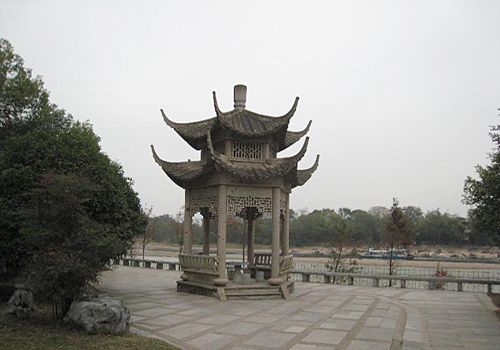 If there are some amateurs of photographies, the Elephant Trunk Hill scenic spot will meet your needs for it flourishes with gorgeous natural scenery. Out of the many possibilities you have to take good photo shots there, it is suggested to take a picture of the Elephant Trunk Hill from a traditional bamboo raft that can be hired from the bank. A quiet and original way to live a tour experience in Guilin city, your shots will just be amazing, reflecting the best of the site's view (especially at sunset!). For the most courageous one daring to climb the hill, the top of the elephant's back give you a beautiful panoramic view of Guilin city, from where you can actually see another elephant lying on the other part of Guilin city!