When you’re wooing a girl there seems to some socially accepted steps to do so. You know, first off talk to her, and later get her phone number after "accidently" bumping into her (after waiting for said "accidental" opportunity for an hour.) Than after a quick bit ask her out, give some flowers, yata yata yata and so on. Now maybe subconsciously I don’t know what these steps are, or maybe I just don’t like them, so in short to woo a girl I take her on a trip, and then can’t find a bus home and end up hitchhiking in the back of a farmer’s truck with her and a pig. Yep…I’m smooth. 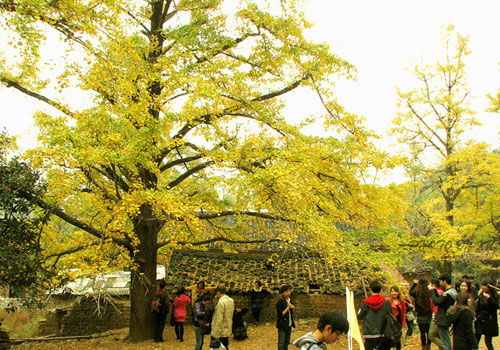 There was a plan for that day, wake up early, go pick her up, hop a bus, and go see some beautiful autumn scenery. Well that’s just not how it went at all. I woke up late, ended up getting to her place around 12, she made lunch, we ate, we talked and by the time we were out the door it was about 2:30, we rode a bus for an hour and a half to Hai Yang (海洋). (Hai Yang is one of the only places in Guilin that the trees change color during autumn.). When we just got to Hai Yang, people were already catching busses back to Guilin, now for most people that would have been a sign to hop on the same bus we just came off and go back, but we’re not most people. Now from what I understand usually for most blooming couples in that kind of beautiful autumn scenery you should take pictures together one with their arm around the other, maybe one with the guy kissing the girls cheek and the girl blushing, with her hand over her mouth in a cute oh no kind of fashion…nope not us. We took pictures of the other climbing trees, and some of us together with our faces contorted like constipated zombies, there weren’t any nice photos taken that day. They are also some videos of me chasing a chicken, I hurt my knee that day, chickens are fast, and some videos of her chasing a goose and then running away from it, after the goose flew at her and hissed, geese aren’t pleasant animals. 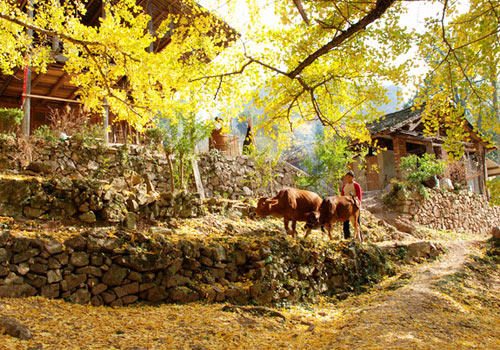 After an hour of running, and climbing it was time to call it a day. We got to the rode and like we feared there weren’t any busses back home, so we agreed hitchhiking was the best way to go. We stopped farm trucks on there way home and rode with them as long as they were going straight and then we’d hop off and catch another. We did this about 4 times before a bigger farm truck came our way, we got him to stop asked him if he could take us as far as Daxu Ancient Town (大圩) he said sure as long as you don’t mind riding with a pig in the back, we laughed and when we realized he wasn’t joking we asked are you cool with taking two more pigs that far? He opened the back of his truck and sure enough there was a pig. We got in and started on our way. We did eventually get to Daxu, they opened the back door and said,” you know we’ll take all the way into Guilin if you’ll, buy us some food.” So we let them choose what to eat, what did they choose? Dog hot pot, yep. After living in China for over two years I was okay with that, however my girlfriend had never had dog before and wasn’t too into the idea, but she did it. While we were eating she went to the bathroom, and after a bit I realized she had been gone form awhile. When she came back I decided I’d be a good boyfriend and give some more meat, she ate it, but wouldn’t eat it unless if I gave it to her. Up until Last week I didn’t know why that was, then I asked her why, she told me it was to go puke out her guts, after telling me why she just kind of glared at me for a bit, while I laughed, and then said thanks for that. Like I said I’m smooooottthhhhh.
--- By Daniel (VisitOurChina)
Tags: Guilin Haiyang Daxu