The rain kept drizzling down and our hiking was on the march. It took two and half an hour to hike from the Wumaling Ancient Path to Xiong Village. We left Lower Wuma Village at 11:00 and our lunch was arranged on a ground at the ancient path at noon. As you can see in the picture, our meal was more like a simple picnic, but my fellows were with great relish and still immersed in the excitement for the following challenge in physical strength. After one hour’s time of lunch and rest, we restarted the rest of the scheduled hiking, which was apparently harder to go on. On the way we were discussing how caravans of the old time overcame this challenge.

(Photo: Our lunch in the open)
At 14:30, our team reached the foot of the mountain finally and saw an old village right here. Just like that at many ancient villages, there is an old tree at the entrance of the village. Commonly, the guarding trees of most villages are camphor tree, while the one here is osmanthus fragrans. It usually takes 5-15 years for Osmanthus fragrans to grow up and bloom, so we guessed this tree should be rather old. 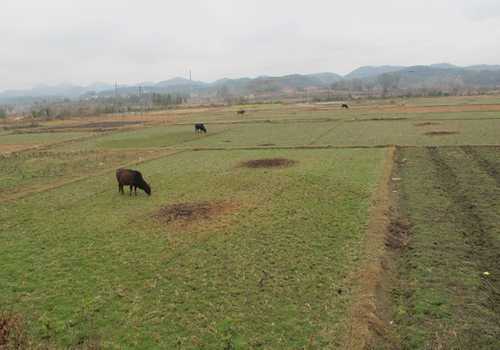 (Photo: Cattle are grazing in the harvested paddy fields)
The notice board of the village told us that it is Nanji Village of Daxu Town, Lingchuan County. Made up of old earthen houses and newly-built red-brick houses, the whole village appeared to be very peaceful - it seemed that the villagers had gone to work, and we uninvited guests broke the tranquilness to the core by playing games on the basketball court in the middle of the village. 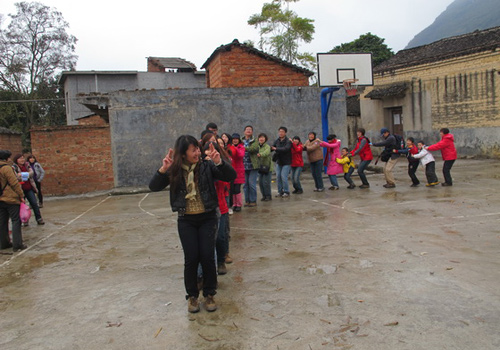 (Photo: Our Rabbit Dance on the basketball court of Nanji Village)
At 15:30, it was time for move again. Soon, exactly ten minutes later, another village named Daqiaoshan came into our sight unexpectedly. Thank God! We could say bye to mountain paths and went on concrete road here. But, well, to catch more beautiful rural scenery, we quitted the comfortable road and specially went round the loanings. Our sacrifice was returned with fields of cole flowers and sweet rockets. 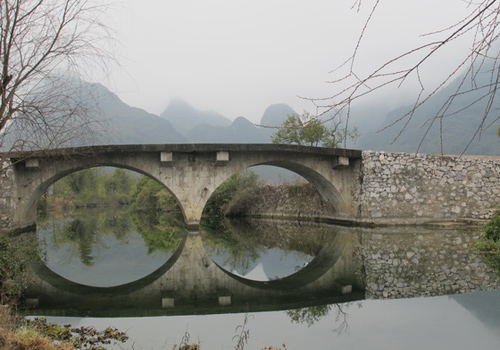 (Photo: A two-arch bridge and its reflection in the water creat a picturesque Chinese painting-like scene together with the surroundings.)
The loanings led us to the Xiong Village, the end of our destinations as well as a well-preserved part on the ancient Hunan-Guangxi Commercial Path. The village is under the administration of Daxu and is some 8 km apart the Daxu Ancient Down. Xiong (熊), literally bear, is the name of the village and the family name of monority of the villagers. 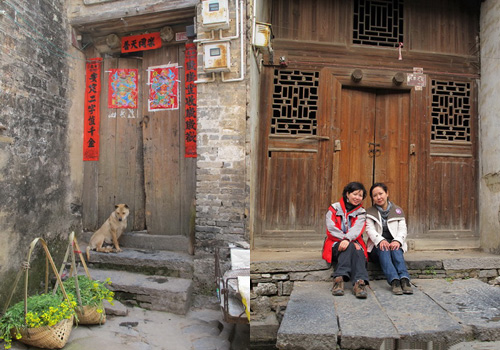 (Photo: Left - A dog is guarding a house; Right - a picture of two ladies of our fellows in front of an exquisite wooden door)
Dating from Song Dynasty (960-1279), Xiong Village has had a history of nearly one thousand years. The road of the village is paved with slabstones and cobblestones, with mountains and streams surrounding around. Until this day the local still wash clothes and vegetables in the streams. The dwellings are of the architectural style of Ming (1368-1644) and Qing (1644-1911) dynasties. It is interesting that each of the houses is constructed with courtyard, into which sunlight shoots and rains fall. We were told that most of the rich have moved away and the youth have been to cities to work, so almost all of the people at home are elders and children.
Stopping here, we completed the whole of the hiking and returned back to Guilin with tired legs and relaxed mind for one more time.