As an avid traveler I find great joy living in a large country like China. With an incredible variety of terrain and an equally diverse cultural landscape, the amount of traveling possibilities is seemingly endless. While I certainly cannot claim to have been to even half of the more famous cities and sites, I have at least been to some of the key regional destinations such as Beijing in the north, Chengdu in the west, Shanghai in the east, and of course, Guilin in the south. However, of all the locations I have personally traveled to in China, my favorite is probably the least known of all: Guangxi Autonomous Region’s Weizhou Island (涠洲岛).
Weizhou is a tiny island situated off of China’s southern coast in the Gulf of Tonkin. With a total landmass of only 36 square kilometers, the island is a mere dot on the map despite being the province’s largest island and the country’s largest volcanic island. Regardless of size, it features some of the most truly amazing natural sights I have ever witnessed. The island is home to lush tropical forests, unique volcanic geology, and beautiful yellow, sandy beaches surrounded by seawater the color of jade. Weizhou Island also features several notable man-made structures which include rustic fishing villages, a couple of seaports, and even a Gothic-style Catholic church built by the French in the 19th century before Vietnam returned the island back to China. 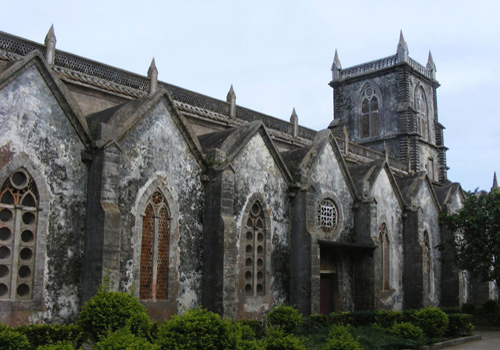 At this point you may be asking yourself how I came to know a place that even many Guangxi natives are unfamiliar with. A fair question. It all started with a geography lesson with my Chinese language tutor, a Guilin local, who introduced me to the relatively unknown place. The thought of traveling to an obscure tropical island that belonged to the province I was studying in seemed fantastic and so I kept the name in mind for future reference. Ironically, months later I found myself in my home country watching a television show about the coral reefs and unique sea creatures in the waters south of China. I was astonished to find the program was about none other than Weizhou Island! At that moment I was determined to make a visit and that spring a group of friends and I planned a trip. 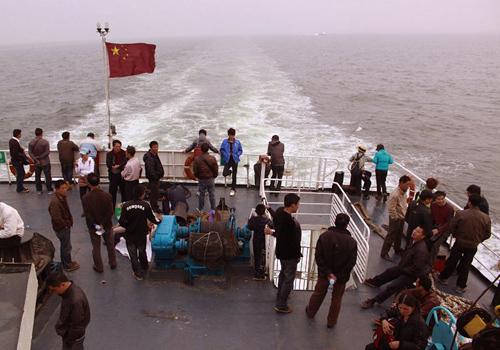 We decided to meet in Beihai (北海), a small beach resort city, during the first festival of the spring semester. After everyone arrived on the morning we had agreed upon, we took a bus to the ferry station where we purchased our tickets and awaited the next leg of the journey. My friends and I were already buzzing with excitement as we waited in full view of the vast expanse of ocean that lay before us. In little time we boarded the first ferry of the day which happened to be the “slow” boat or, in other words, the cheaper option that allowed for a relaxing ride to the island (the slow boat costs 40-60 RMB per person and takes about two hours to arrive at Weizhou Island while the fast boat costs 98 RMB and only takes about one hour).

Upon dropping anchor, we promptly paid for the entrance fee, a common occurrence at designated tourist towns and parks throughout China, and found a three wheel transport vehicle to take us to our hostel on the south bay (南湾港). We passed numerous pockets of villages and banana farms on our excursion through the island’s interior before reaching the south coast of the island. The hostel was befittingly constructed before a small mountain and throng of tropical tress just across the road from the beach. I thought to myself, “We’re here. We finally made it. I’m actually standing on that dot on the map that’s hanging on my wall back in Guilin.” We quickly changed into our bathing suits and hit the beach. 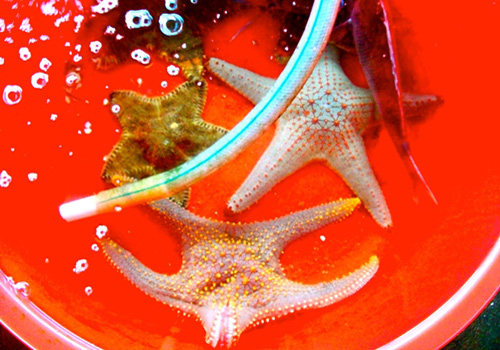 That afternoon, like most of our time on the trip, was spent enjoying the sun and sand playing soccer, sunbathing, and swimming with virtually no one else around. It couldn’t have been a more picturesque setting. When we weren’t on the beach we were just down the road at one of the beachside bars or restaurants that not surprisingly specialized in seafood. What was surprising was the degree of freshness of their fare. These restaurants, which seemed more like small aquariums, showcased large collections of live exotic sea creatures housed in tanks and tubs for their customers’ handpicked dining selection. It was baffling. Although I don’t eat seafood myself, I was curious to see what animals were (still) indigenous to the island’s shores like brilliantly colored starfish, enormous sea urchins, and what looked like cuttlefish among many others. I instead opted for rice noodles and fresh fruit sold at the markets. 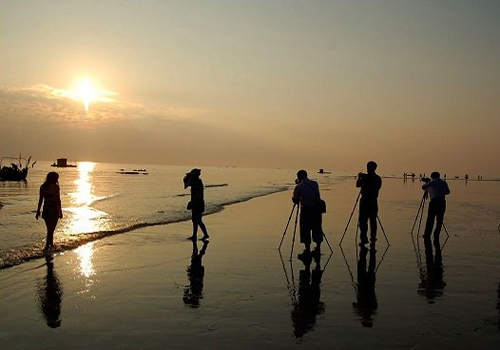 We were having a blast but unfortunately, our time on the island was short since we only had a long weekend to spare.   The time we did spend, however, was memorable and left us each with deep impressions as well as plenty of stories to tell. My favorites include the hike to the other side of the bay where we climbed some peculiar volcanic rock formations, bonfires and music on the beach, and looking out at the fishing boats scattered across the bay twinkling like fireflies while enjoying the cool, evening sea breeze.
When the final day of the holiday arrived, reality began to set in as we contemplated our classes, homework, and jobs impatiently waiting for us back at our university. In my heart I knew Weizhou Island was a special place and comforted myself by promising to return whenever I could. It was the perfect travel destination and there was still plenty left to see and do there. Thinking back on it now, if that job offer at the Guilin Tea Institute never materializes, I could always relocate to Weizhou where I could teach English at one of the village schools or sell seashells to tourists at the ferry station and be content with living the simple life on an island in the sun.
--- By Patrick R Magoffin (VisitOurChina)
Tags: Weizhou Island volcanic island Guangxi