the seven wonders of the ancient world 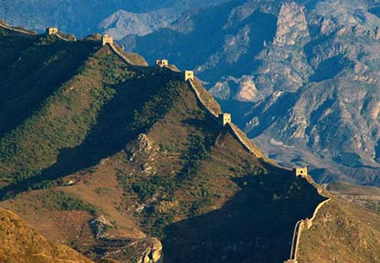 Christ Redeemer; Brazil
The 124-foot statue of Jesus stands atop the Corcovado Mountain overlooking Rio de Janeiro. Built in 1931, it took five years to construct and symbolizes the warmth and welcoming spirit of the Brazilian people.

Great Wall Of China
The largest man—made monument ever built at about 4,000 miles in length, the wall was originally built to help create a united defense system and prevent invading Mongol tribes out of China. Construction began around the 8th century B.C. and efforts to revive it took place from 1368 — 1644 A.D.

The Pyramid at Chichen Itza; Mexico
Chichen Itza once served as the political and economic center of Mayan civilization. The city housed masterpieces like the Temple of Chac Mool, the Hall of the Thousand Pillars, the Playing Field of the Prisoners and the pyramid of Kukulkan, which was the last Mayan temple.

Colosseum; Rome
Almost every sports stadium today is created based on the design of the Colosseum, built between 70-82 A.D. Located in the center of Rome, the amphitheater could seat up to 50,000 spectators who watched public spectacles like the infamous gladiator fights.

Machu Picchu; Peru
Machu Picchu, which means "old settlement," is located halfway up the Andes Plateau—in the Amazon jungle and above the Urubamba River. Originally a 15th century Incan settlement, the magnificent city was "lost" for three centuries, then rediscovered in 1911.

Petra; Jordan
Petra, located on the edge of the Arabian desert, was home to Aretas IV, king of the Nabataeans, who were masters of water technology. The facade of a 138 ft.—high Hellenistic temple on the El-Deir Monastery—an example of traditional Middle Eastern culture—sits within the Palace Tombs of Petra.

Taj Mahal; India
The white marble mausoleum is believed by many to be the best representation of Muslim art in India. The Taj Mahal was built around 1630, an order from Muslim emperor Shah Jahan, to honor the memory of his beloved late wife.

You may be interested in:
How were the messages sent along the wall?