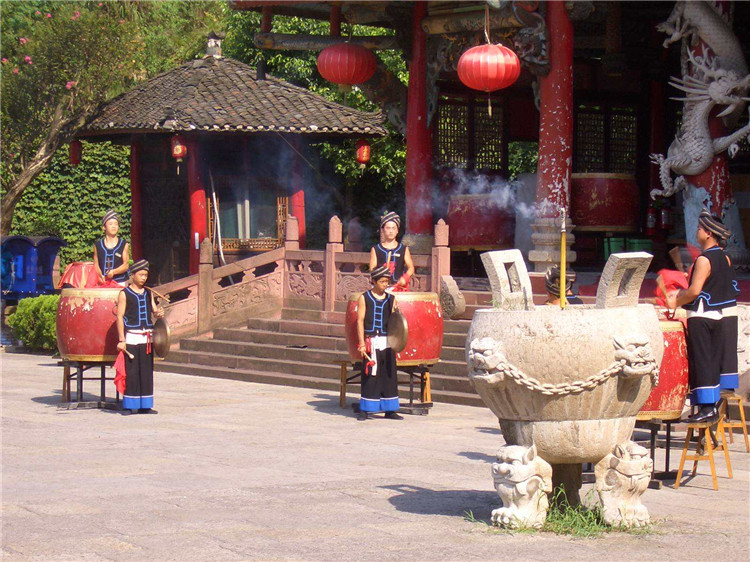 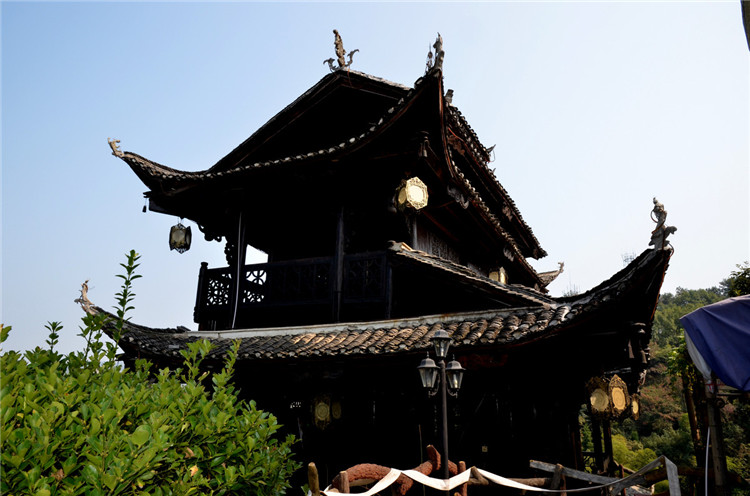 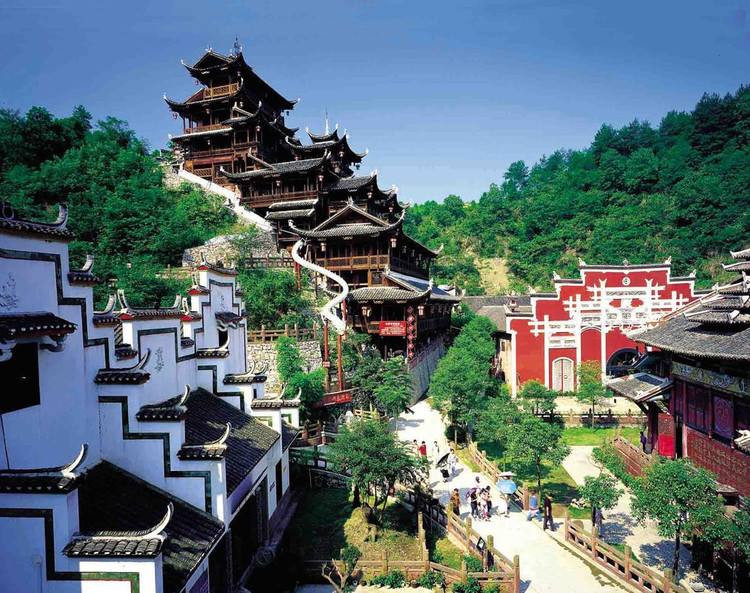 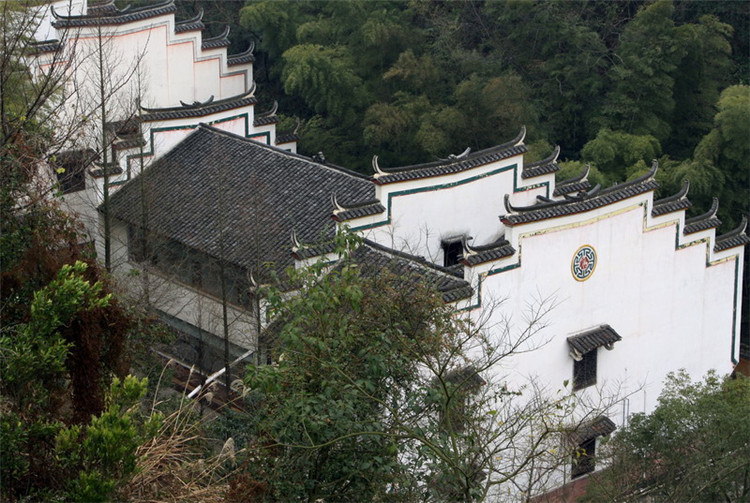 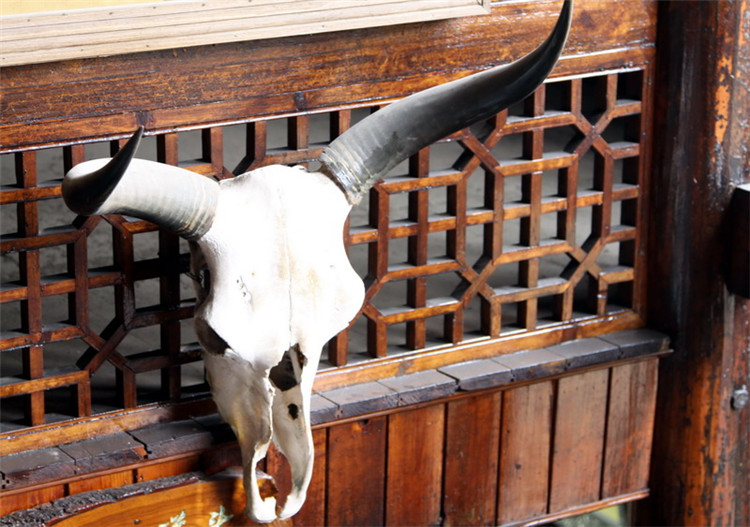 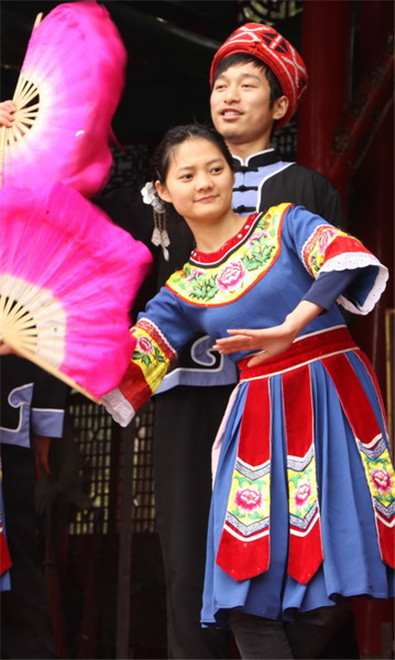 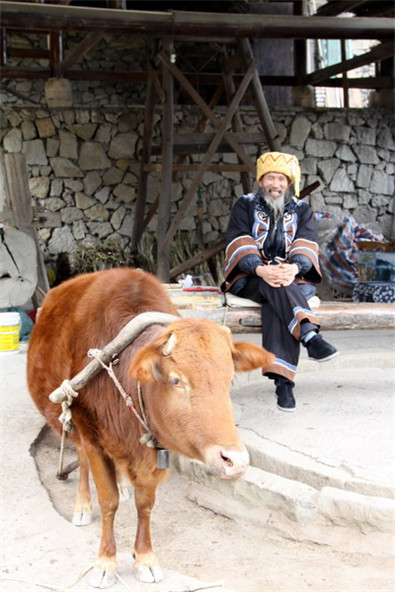 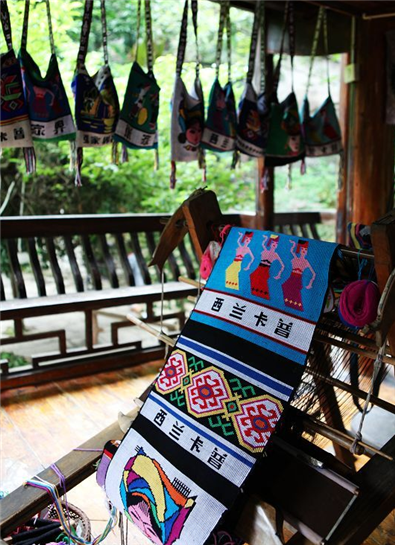 Introduction to Zhangjiajie Tujia Folk Customs Garden
Tujia Folk Customs Garden is located in the picturesque city of Zhangjiajie. The transportation to arrive there is very convenient, only about ten minutes drive from Zhangjiajie airport or the railway station. Covering an area of nearly 0.54 square kilometers, it is a large-scale comprehensive tourism service unit that integrates cultural and natural landscapes, and combines tourism, art performance, rare treasures exhibition, accommodation, catering, entertainment, and shopping into one. 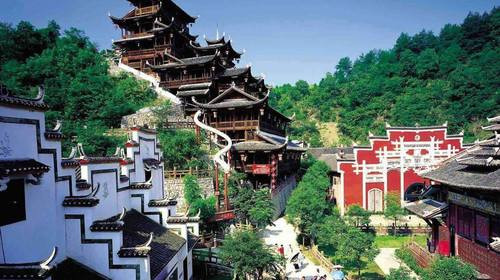 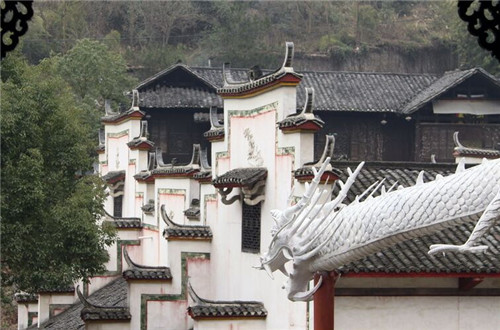 Cultural landscapes in Zhangjiajie Tujia Folk Customs Garden
Tusi Castle
The ancient Tusi, leader of a minority tribe, had supreme authority. In the Tusi Castle of Yongding in Zhangjiajie, the Tusi built his tallest 48-meter-high, 12-storey stilted building in western Hunan province in order to show his status. The whole building has no iron nail, can be regarded as a miracle in the history of the construction of Tujia stilted buildings.   It was included in the Guinness World Records in September 2002, and was identified as the tallest wooden structure stilted building in China. At the same time, the Maugusi dance activity held by a thousand people in the Tusi Castle won the largest one of this kind in Guinness records. Entering the Tusi Castle, visitors can see the welcome ceremony, the Tujia ancestor worship activity held in front of the sacrificial hall, the Tujia people singing hand-waving songs and dancing, and the cultural exhibition of Tujia people over thousands of years. Going to the Tujia cottages, you can appreciate Tujia's most representative marriage custom, and other folk performances such as playing the drum with three sticks.

Folk traditions and customs displays
Tujia folk traditions and customs are displayed everywhere in the garden, such as Tujia wedding customs, headwear and costumes, batiks and brocades, techniques of the silversmith and the stonemason, rare stones and root carvings, exhibitions of precious cultural relics, etc. The performers in the garden are professional performing elites hired from all over the country, and their performance forms and contents are characterized by the promotion of culture and the interpretation of life, mainly including the Maugusi dance, brass bell dance, hand-waving dance, and the folk songs. 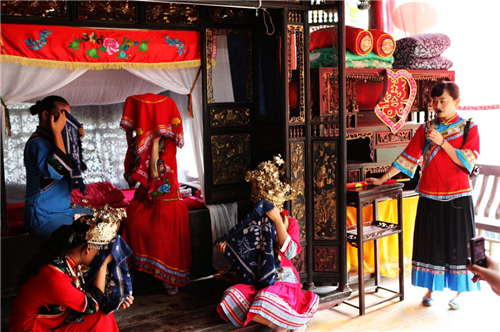 Pitzka Shenghuotang Performance Group
The Pitzka Shenghuotang Performance Group was established in 2003, its performance "Tujia Customs and Miao People's Charm" through the three chapters of "blessing", "amorous feelings", and "marriage customs" artistically reflects the customs of the local Tujia people, fully shows the mysterious color of western Hunan province and the diligence, simplicity and kindness of the people in this area. 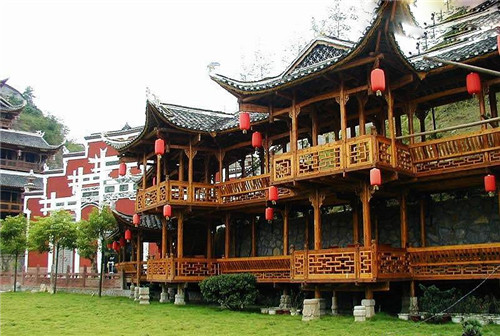 Totem Pole
Also called Optimus Prime by the local Tujia people, the stone pillar is 12 meters high and 1.2 meters in diameter, located in the center of the Zhangjiajie Tujia Folk Customs Garden. Totem refers to a kind of animal or natural thing that people in primitive society think is related to the blood of the clan. It is generally used as a symbol of the clan. The white tiger “sitting” on the stone pillar is the totem of Tujia people.